My story "'Hello,' Said the Gun" is live at Daily Science Fiction

Less Talk, More Rock — An old essay on Boing Boing about the creative process, from the perspective of videogames. Pretty interesting stuff. (Gakked from, um, somewhere.)

Eye of the Storm — A wonderful animated steampunk music video. Just watch. (Via

Walter Rothschild and the rise and fall of Sclater's cassowary — Proof postive that zoological history is no less weird than any other branch of history. Plus trained zebras!

Remapping Computer Circuitry to Avert Impending Bottlenecks — A rethinking of computing architecture. (Via my Dad.)

Small Nuclear War Could Reverse Global Warming for Years — And the award for Most Bizarre Headline goes to National Geographic.

Wingnuts Discover Limits to Executive Power — That would be "limits to executive power when wielded by a non-white, non-Republican." Like Ed Brayton, I sure don't remember the Right being angry at Bush for exactly the same thing. Hmm, what could the difference possibly be?

The Most Disturbing Personality on Cable Television — Conservatives on Glenn Beck. He's your boy, enjoy him. (Though in fairness, Beck's ratings have been in steep decline, so maybe there's a limit even on the Right.)

Dagny Taggart Wept — Paul Krugman quoting George Will on railroads: [P]rogressivism's aim is the modification of (other people's) behavior. Uh, George...have you looked at a single conservative talking point in the last 30 years? The conservative movement is about nothing but modifying other people's behavior. Who can be pregnant when, who can have sex with whom, who can marry whom, who can travel when and where, who is allowed to endure financial risk and who gets to be bailed out, what governments other countries are allowed to have. In plain language on the face of its own premises, conservatism is dedicated to the most intrusive government possible. 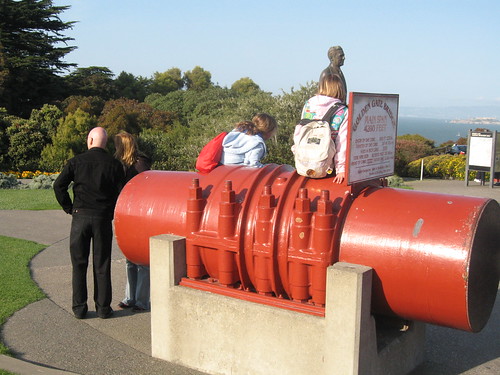 This afternoon I'm heading out for my annual gig as one of the attending pros at Rainforest Writers Village deep in the beautiful wilds of the Olympic Peninsula of Washington State. Given the eccentricities of both cellphone service and Internet access at Lake Quinalt, I'm likely to be completely off the grid most of the time through Sunday evening.

While at Rainforest I expect to:


Also, next Monday I fly to Omaha for a week in the salubrious climes of the Midwest, engaging in Day Jobbery. Except for Sunday night, I'll be away from Nuevo Rancho Lake for ten days.

In celebration of my natal anniversary, JayCon XI, my 11th annual 37th birthday party, is Saturday, June 4th, 2011 from 2 to 5 pm at the Flying Pie in SE Portland. We're partying because I was born, and because I have beat cancer again and again.

In slightly related news, I'll be part of the inaugural event of the SFWA reading series at McMenamin's Kennedy School here in Portland, hosted by Brent Weeks, featuring Brent, Kay Kenyon and myself. The event is the evening of Tuesday, April 19th. Mark your calendars, and when we get closer to the date, I'll have the appropriate links.