Announcing Ken Scholes! — Cascade Writers confirms that Ken Scholes is taking over my slot at this summer's workshop. There are still a few registrations open.

Science fiction author begins war of the books worlds — Stephen Hunt has grown so tired of the marginal status of his chosen genre that he has begun campaigning for equal genre rights. Really. Who reads that Stephen King stuff, anyway? Or J.K. Rowling?

The Ashtray: The Ultimatum (Part 1) — A fascinating article about Thomas Kuhn, among others. (Snurched from

How the Internet Tried to Kill Me —This is funny. (Via Dad.)

Language Log on the history of the word 'tsunami' in English — When I was a kid, I swear we still called them 'tidal waves'.

This photo from Japan is beautiful and heartbreaking — Yes, it is miscaptioned, and it appears to date from a 2006 earthquake. It's still a powerful image.

cathshaffer is sensible about Japan's current post-tsunami nuclear issues, and the coverage thereof 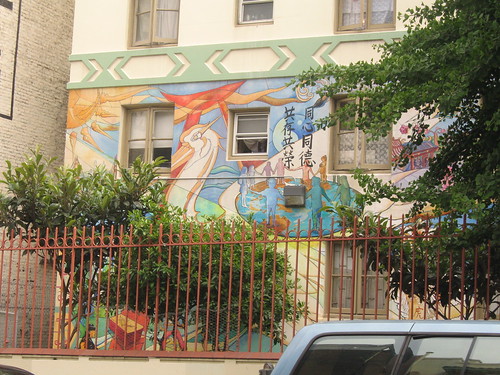 I'm continuing to lead up to discussing my process on Sunspin and how that's both inflecting and being inflected by this incomplete critical framework. As I said last time, for me and my work, drafting has always risen from the subconscious mode of Consuming Story, revision has always taken place in the self-conscious mode of Producing Story.

So what is different about this book?

Well, for one thing, I've never really been quite as pure a Consumer of my own writing as I've implied. I've long used parenthetical notes within running text to remind myself of things I want to deal with on revision. Self-evidently, that is me metathinking about the story in hand rather than experiencing it immersively. An example from recent first draft work on Sunspin:

He nodded at the holster at her side. [mention earlier with uniform] "I understand why you didn't have the troopers do it, but why didn't you just shoot me?"

That's a continuity note to myself, in this case almost literally to place the gun on the mantel.

In other words, bear in mind that my practice of not revising while drafting has always had a little wriggle room. As above, to allow me to leave notes to myself like breadcrumbs. These might be continuity issues, a need to explore backstory, a note to insert foreshadowing or even an entire missing scene. (I use [square brackets], by the way, because I can count on the fingers of rather less than one hand the number of times I've used '[' or ']' in actual finished text in my entire career. Those characters make a handy placeholder that's easy to search for automatically and also catches at the eye when I'm scanning a page.)

That being said, with one modest exception, every book I've written before this has been written front to back, in reading order, with little or no stopping along the way. I check the outline every day when I sit down to write, occasionally refer back to it while I'm writing, but I otherwise I simply plug away. The story just sits in my head, per my prior comments about "span of control".

As I know from the first draft of Green, my current span of control is about 200,000 words. That's how big a narrative I can hold in my head without losing the threads. Plot, character, setting, details, they're mostly all there once I've done the outline, the exploratory short story writing and the background thinking. (For more on "span of control", see here and here.)

But bear in mind that Green is single-threaded first person POV. I never needed to cut back and forth among various protagonists, or keep track of hidden information between one set of characters and another.

Also bear in mind that Green was written prior to my six months on chemotherapy in 2010. My memory for certain kind of details just isn't the same as it used to be. Nevertheless, in the fall of 2010, I successfully drafted Kalimpura, the third Green novel, using my long-established process.

Now here comes Sunspin. I'm writing three books of a trilogy as a single project. I have eleven point of view characters. (It's structured rather like a thriller, in case you're wondering how I m doing that.) I have at least a dozen more significant secondary characters who get a lot of page time. The entire plot hinges on layers of hidden information — hidden not from the reader, though there is certainly a pacing to my reveals, but from the various competing protagonists. On top of all that, my rough estimate of the expected total first draft length is 600,000 to 750,000 thousand words.

How on earth could even I keep all that in my head? Sunspin is an order of magnitude more complex than Green. And that's not even accounting for the odd bits of post-chemo fuzz still cluttering up my brain.

So I've had to wrench myself from the special case of Consumer mode I've been working in through much of this past decade as a writer, and push myself back into Producer mode. Much as I worked when I was first starting out as an aspiring writer over twenty years ago, and even was still working when I first began to sell professionally ten years ago. Back to the future, in other words.

Except this time around, I'm hybridizing the two modes. And I'm tackling all this very much on purpose. Upsetting my own applecart so as to let the fruit fall where it may.

As this multipart post continues, I'll talk about what I'm actually doing on Sunspin, why it's different from Green, and why it's similar to my aspirational efforts of so long ago.