Andrew Wheeler reviews Jennifer Egan's A Visit From the Goon Squad — Now I really want to read this book.

Peculiarium: Museum relies on a less-than-typical aesthetic — Another thing to do in Portland. (Thanks to Dad.)

Squids In Space--Seriously — Finally! (Thanks to David Goldman, whose editorial comment I am stealing.)

An Amazon Kindle Tablet in 2011? — Interesting stuff. Too bad it's from the corporate evil that is Amazon. (Longtime readers may recall my severe irritation at Amazon's careless abuse of their market power in blocking Macmillan print sales [ie, my books] during their unrelated Macmillan ebook negotiations last year, thus punishing authors over a dispute between Amazon and their publisher.)

?otD: Why aren't the Northwest Territories in the Pacific Northwest? 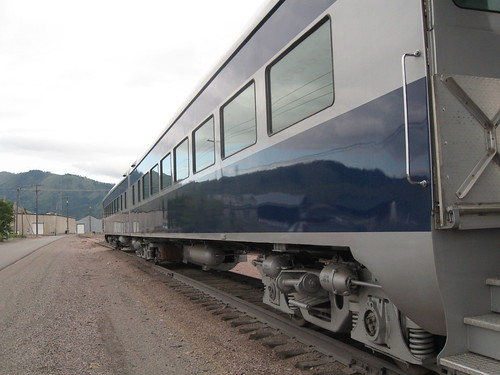 I was very much struck by something on Kauai. Here we have a small island in the middle of the Pacific Ocean on which the transportation infrastructure of the continental United States has been fully replicated. The island is chock full of SUVs, pickup trucks, V6 and V8 convertibles, automobiles large and small, serving the 30,000 or so permanent residents and the transient population of several thousand tourists.

Kauai is about 30 miles wide, with half a dozen population centers. More than half the surface area is completely unroaded and unsettled. The longest single point-to-point drive one could possibly make is somewhat less than 100 miles. The total road net can be measured in hundreds of miles, or possibly the very low thousands. The highest speed limit on the island is 50 mph, and the average speed limit is probably well below 30 mph. Also, the traffic gets very congested quite easily at a number of chokepoints.

In other words, limited travel routes, limited destinations and moderate to low travel speeds. And gasoline costs about 150% of West Coast prices, all of it being barged in from elsewhere.

Which would seem to be precisely the use case for electric vehicles. Not to mention making Kauai a terrible place to operate and maintain the high-speed, long-distance vehicles known as the modern automobile.

Kauai would be a perfect laboratory for a seriously ambitious alternative transportation project. At its simplest, a project sponsor could offer a subsidized vehicle swap for extremely efficient automobiles like the Smart car, a move that if widely adopted would likely save a great deal of per-mile transportation costs to the residents, reduce wear and tear on the local roads with a concomitant savings on maintenance and repair for the County of Kauai and the local municipalities, and impact point source pollution on the island, thus improving and preserving the Garden Island's paradisaical reputation.

Who could do this? The State of Hawaii. The Federal government. The major automakers. Universities with significant transportation research groups. A coalition of all of the above. It seems to me there could be a lot of latent motivation among the local population to participate. Kauai represents about the best set of controlled conditions you could find in the United States for such an effort. Thanks to the limited road distances and constrained travel patterns, the sacrifice of a large-scale transformation of the American automotive tradition would be fairly minimal.

I rather imagine much smarter heads than mine have seen this for years, and quite possibly are working on such a project. I can see all kinds of reasons why this wouldn't work, would be a bad idea, would cost too much, etc. What I know about the Hawaiian economy and culture could fit easily within an old episode of Hawaii 5-0. Chances are quite strong that I'm full of it here in ways I don't have the first clue about.

But still, consider the possibilities. Transportation transformation initiatives are proceeding fitfully all over the United States today. Kauai is such a perfect laboratory for trying them out in the real world. Wouldn't it be interesting to take on those efforts as strongly as possible, in a place where the results would be readily apparent, easily analyzable, and create direct benefits across the board?

My weekend in paradise with

the_child did me some powerful good. It also provided some powerful father-daughter bonding, adding credit to a life-deep emotional relationship that should carry us both a little more strongly through this next round of chemotherapy. Because as I draft this post, I am on an airplane that is carrying me back to real life towards a crash every bit as rending as a runway bellyflop on arrival would be.

I am experiencing a lot of fear and trepidation about the forthcoming week. Monday is going to be crazy-busy with work, socializing, medical stuff, getting my head shaved, and a girls' lacrosse game.

And that's about it for my normal life until sometime next year.

Tuesday is lost to the day surgery of having my chest port reimplanted.

Wednesday and Thursday will be in substantial part taken up by post-operative discomfort, as I recollect from the last time I had this surgery. Not to mention the final preparations for chemotherapy.

I go on. There is no way out but forward.

In celebration of my natal anniversary, JayCon XI, my 11th annual 37th birthday party, is Saturday, June 4th, 2011 from 2 to 5 pm at the Flying Pie in SE Portland. We're partying because I was born, and because I have beat cancer again and again fucking cancer is back, again, and I will beat it, again.