The Periodic Table of Storytelling — (Via SF.)

Characteristic Ages of Genres — Andrew Wheeler is amusing while making an interesting point.

Call Michael Brotherton the Roger Ebert of science fiction movies — I remember him when he was was just a punk kid grad student.

Social Media: Preparedness 101: Zombie Apocalypse — (Thanks to , a/k/a my sister.)

“Women making barrage balloons in a German factory, circa 1943” — A curious photo.

Disappointment, despair and Harold Camping — I stopped thinking of his “Bible prophecy” obsession as a kooky, but mostly harmless set of beliefs. I began to realize that it was a framework that burdened its followers with the inevitability of disappointment, false hope, denial and an inconsolable fear. Its adherents were its victims. There were other victims, too, but its main damage was wrought in the lives of those who most believed it. I am not so evolved as Slacktivist Fred Clark, and have more difficulty summoning his genuine sympathy for the self-inflicted victims of willful idiocy.

Newt: I'll Make America Just Like Texas — Texas is dead last in the percentage of residents without health insurance, dead last in the number of children insured, and dead last in the number of women receiving early prenatal care. Texas is 44th in the number of children living in poverty, 45th in having the highest percentage of infectious diseases and 36th in high school graduation rate. Reminds me of my Texas Republican friend years ago who really wanted the US to go back to the way it was in the 1950s, when the country was free, safe, and prosperous. Except for the part where her divorced self wouldn't have had her job because a man needed to feed his family and wouldn't have been allowed in the door of her Bible-believing Church because she lived in sin with her boyfriend. (Not that she appreciated me pointing any of that out. I ruined a perfectly good rant against the evils of the same liberalism that made her divorce and her lifestyle socially possible and acceptable in the first place.) The bad stuff doesn't count in conservative mythmaking.

You’re So Brave To Expose All Those Popsicle Woes — Islamic terrorism and urine-soaked popsicles. More intellectual leadership from the American Right. Christ, you guys would be hilarious if you weren't so disastrously destructive.

The Year of Living Adulterously — What is it with Republicans lately? What does she mean, lately? The family values crowd never has been either. 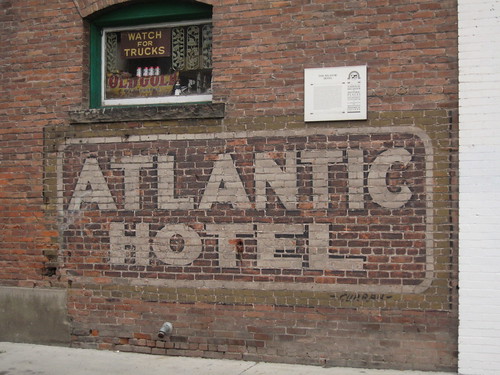 Passing through the town of Hanapepe on Kauai, an odd building that looked a bit like a treehouse caught our eye. ( Collapse )

Next up, the Russian Fort on Kauai (who knew?) and an abandoned sugar mill.

For those with memories of my last go-round, yesterday was pretty much Shedding Day. Not nearly as nasty as the same event in the prior chemo sequence, but then early on I hadn't been smart enough to be careful about milk products.

On the whole, I felt pretty good. Managed strong productivity at the Day Jobbe, lunch with my parents, some (unusual) overtime at the Day Jobbe, a helpful visit from , wrangled various data backups and whatnot, got a certain amount of writing done, had a delightful dinner with and a fairly productive series of dad-daughter conversations with to cap off the evening.

The discerning reader will observe that I actually consumed two meals yesterday. This in addition to my hourly consumption of small amounts of food, which much as last time is the most effective nausea control. Once I can choke it down in the first place. I did nearly backslide yesterday morning by eating a bit of hummus. Apparently last weekend's reverse peristalsis swung a quick bit of operant conditioning on me with respect to a novel food aversion.

But most importantly, I have felt myself as of yesterday. Basically, that's a week to really get over chemo number one. Insofar as I am over it. I'm hoping like heck that the lack of Vicodin in next week's festivities will help curb the bicameral digestive complications.

In other news, overnight I dreamt about the (so far as I know wholly imaginary) Japanese practice of eggshell farming or nacre farming. When one wishes to grow moss or lichen or tiny, Arctic flowers, one uses eggshell or nacre fragments as trainers or climbing frames, as well as borders, pavers, etc. Think of it as a bonsai garden, entire little Heligans in a space the size of the palm of your hand. It was very strange.