Helium Hokum: Why Airships Will Never Be Part of Our Transportation Infrastructure — Why let a little reality get in the way of a good steampunking? Some cool history and tech here. (Via David Goldman.)

Plan for China's Water Crisis Spurs Concern — (Thanks to Dad.)

'Global Commission' Of Former Officials Says War On Drugs Has Failed — Also, this just in: sun rises in east. More on this from The Independent.

Mudbugged: Crawfish shortage spurs shooting at business — Second Amendment right to an assault rifle, check. Defense of essential liberties, check. No background requirements for gun ownership, check. Exercising your Constitutional rights by shooting up the fish market because they're out of crawdads, check. Just another day in conservative America.

[NJ] Gov. Christie's proposed income limits would cut Medicaid for working poor — Adults in a family of three that makes as little as $103 a week would earn too much to qualify for health care provided by Medicaid under a sharply curtailed program Gov. Chris Christie wants the federal government to approve this year, according to state officials and advocates briefed on the proposal. Now that's compassionate conservatism in action. Are you proud of your Republican party?

Straight from twitter - perception and reality about Obama — Conservative "thought" untrammeled by facts. It must be comforting to have a hermetically sealed worldview that is not intersected by reality. (Snurched from Steve Buchheit.)

Fact Checking Romney — [H]e falsely said that President Barack Obama "has stood watch over the greatest job loss in modern American history," calling this an "inconvenient truth." Actually, the truth, inconvenient or not, is that more jobs were lost under President George W. Bush during the recent recession than under Obama. Those pesky facts, so often biased against conservatives. Luckily for Romney, his audience is far more interested in rhetoric than reality.

The Goodwin Liu nomination: Impaired judgment — How times have changed. In 2005, when Democrats balked at confirming some of then-President George W. Bush's judicial nominees, Senate Republicans widely declared that filibustering a judicial nominee violates the Constitution. Late last month, however, Senate Republicans embraced the tactic, almost unanimously joining a filibuster of professor Goodwin Liu's nomination to a federal appeals court. Remember angry Republicans denouncing filibusters and calling for an "up or down vote"? Neither do they. Ah, conservatives, intellectual consistency is thy name. 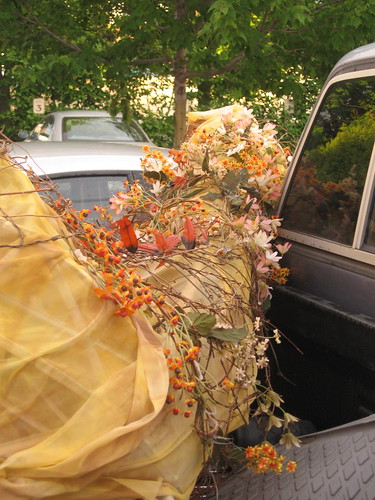 This post-chemo week has been a lot less stressful than the week following session one. That is entirely up to good nausea control. I'm on the new meds (Zyprexa) during the chemo cycle, and I'm being smarter about my eating. I did screw up a little yesterday morning, as I simply wasn't hungry and thus skimped on breakfast. The several days previously I'd been eating a high-protein breakfast consisting of a one-egg omelet with cheese, olives and bacon. (Ever since cutting way back on the carbs, I've been craving protein like a madman.) Yesterday I ate lightly, and spent the morning balancing mild nausea, and once, a severe bout, until I'd gotten stabilized again.

Okay, lesson learned. Egg on the stove shortly from now.

However, for the past two days the lovely and talented has been visiting, and she is something of an expert in alternative forms of cookery. We popped by Bob's Red Mill yesterday — the company outlet and showroom is <5 minutes drive from my house — and scored some almond flour and some coconut flour. Last night Irish soda bread was made. Serious yum. So this morning I'm going to try to whip up some scratch biscuits using a mix of the two flours, to see if I can have something with my egg that doesn't involve wheat flour.

Otherwise continuing to struggle with intermittent fatigue, which became overwhelming at a couple of points yesterday. I expect to be fairly perky for the JayCon festivities, which actually begin today with a small gathering before spilling over into the weekend and the week following. Out-of-town friends are arriving today. Tomorrow ought to be quite something.

And of course, the hair loss. I've lost more than half my scalp hair in the past two days. My beard is making the old college try as well. I may be bald by the end of the weekend. 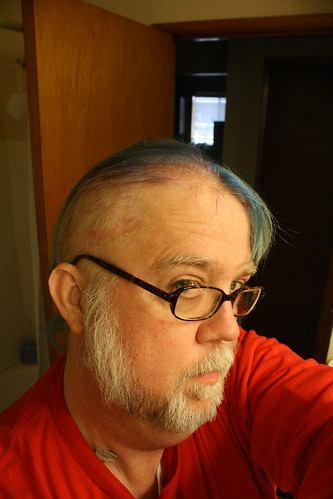 It's a weird feeling, having the hair just come off as I shower, as I brush, as I touch it. There's something deeply disturbing about that. Yet at the same time, I seem to be accepting this as a part of the chemo process. It hasn't been emotionally triggering, for example. Though I do very much miss my real hair.

And so it goes.

In celebration of my natal anniversary, JayCon XI, my 11th annual 37th birthday party, is tomorrow: Saturday, June 4th, 2011 from 2 to 5 pm at the Flying Pie in SE Portland. We're partying because I was born, and because I have beat cancer again and again fucking cancer is back, again, and I will beat it, again.