A reviewer talks about swords and sorcery in sub-Sahara Africa — Holds up Mainspring as a negative example of 19th century attitudes. Except Mainspring is in large part about 19th century attitudes, so from my perspective, it's an odd critique. And though it's not germane to either reading or critiquing the book, I did in fact spend some years of my life living in sub-Saharan Africa. As always, the story belongs to the reader.

A reader responds to Mainspring — They liked it, a lot.

Lessons From the Gutenberg Bible for Publishers Going Digital — Gutenberg's reward for the invention of the printing press was financial ruin, but others figured out a unique way to keep the printing business afloat.

HG Wells or Enrique Gaspar: Whose time machine was first?

St. Jude Postdoc Faked Images — A former postdoctoral researcher at St. Jude Children’s Research Hospital fudged images published in two papers, one of which has since been retracted. Faking cancer research results... I have no words.

As arctic ice shrinks, so does a denier claim — You know, reality wouldn't have a liberal bias in the first place if conservatives didn't insist on ideological counterfactuals over actual data.

Bible condemns a lot, so why focus on homosexuality? — Bigotry, pure and simple. If this was about the written word of God, the Christianists would be campaigning just as vigorously to ban shrimp, mixed fabrics and crop rotation. (Via @willshetterly.)

Quench Not the Spirit — Slacktivist Fred Clark on the doctrine of Hell. This is inside baseball for a part of the culture that isn't my game, but I still find it pretty interesting.

Christian Faith Requires Accepting Evolution — I have no objection to people denying evolution if that's their interpretation of their faith. What I have enormous objection to is people projecting the deliberate irrationalities and counterfactuals of their faith onto the political and social landscape, as if a personal opinion could substitute for reality.

Surprise! Bachmann Supports Creationism in Schools — Apparently she thinks this is a scientific issue of reasonable doubt. Repeat after me: Just because you believe it doesn't mean it's true.

Michele Bachmann's Holy War — The Tea Party contender may seem like a goofball, but be warned: Her presidential campaign is no laughing matter Yes, Virginia, the GOP's deliberate fostering of the crazy in their base to drive votes does have consequences.

"Gooble, gooble, one of us!" — Digby on conservative pacifism. 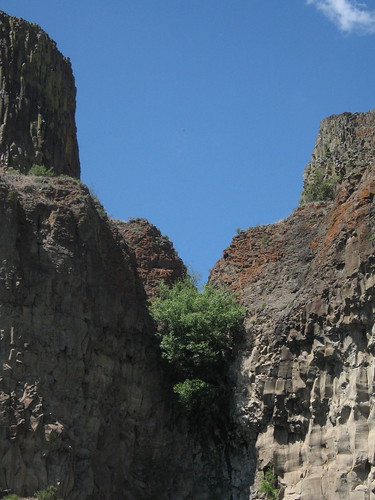 I recently wrote a piece on crafting endings in science fiction and fantasy stories for a forthcoming project. (Details TBA, that's all I can tell you right now.) I've been thinking about that since, especially given that several writer friends have just this week made rueful comments on their troubles finding the endings to various projects in hand.

In my piece, I made some comments about Cordwainer Smith and endings that I think I can amplify here without stealing any thunder from the forthcoming project. Essentially, the point I want to make is this: the completion of the written narrative — ie, the manuscript — is only coincidental to the completion of the story arc. That's generally how we like to do things in the Western story telling tradition, but it ain't necessarily so.

Cordwainer Smith had a habit of using a Chinese narrative style in which the opening of the story handed you the completion of the arc. Or to use a different example, almost no one ever goes to see a production of Hamlet or Oedipus Rex expecting to be surprised by the ending. We already know what is going to happen, we're there to experience the narrative.

I mean to get up early today and write before work, as I did yesterday. It looks like I can still chip out a bit of time, but I slept longer than I thought I would. Instead of writing I dreamt that Game of Thrones was taking place in a high-tone shopping mall, mostly involving a wedding party, and that Canadian writer Michael Hiebert was Jaime Lannister.