A view of the USS Oregon

DDT is good for me-e-e — This just creeps me out.

Can one idea be energy's holy grail? — Speaking of nukes.

Betty Bowers explains traditional marriage using Biblical sources — One man, one woman, my ass. Funny as hell. (Thanks to .)

San Francisco considers banning the sale of all pets — Umm. I'm pretty far to the left (by American standards, at least), but this is the kind of thing that looks like liberal self-parody and, much like evolution denial on the right, makes it easier for opponents to dismiss all liberal-progressive positions by ridiculing specific examples.

Republican self-referentiality — The 'first person singular pronoun' meme is rapidly becoming one my favorite conservative delusions, in part because its counterfactuality is so patently and simply demonstrable. (So is evolution denial, but Creationism bears the imprimatur of faith, which confuses the issue for unclear thinkers.) That they fixate on it says so much about the quality of their thinking on other issues.

Michele Bachmann zeroes in on Iowa — It says a great deal about the decay of the American political system that someone like Bachmann could be a serious presidential contender. Even by conservative standards, she's radical and bizarre. 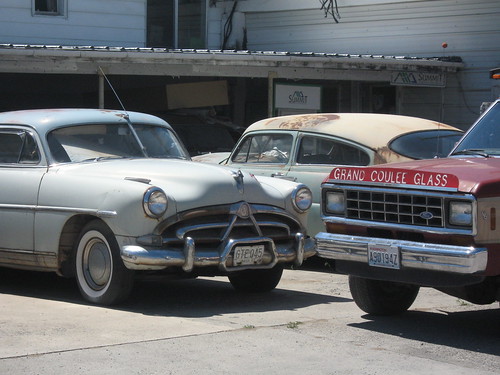 I won't say much about this on the blog because, hey, really you need to turn up in Reno for the big show, or at least catch us on streaming video (I think we're going to be streamed), but yesterday I had the great pleasure of working on the script for this year's Hugo Awards ceremony. And it's making me think a bit.

This is a weird project. I am at the most one of many co-authors, given that my co-host is taking as big or bigger a role than I, and the fine folks on the Renovation committee will be providing much input and material. Yet I'm the one that got to sit down with a blank page and think it out. Structurally, thematically. From a humor perspective. Because, yes, while this will come as a shock to many of you, I hope to be funny up on stage.

That's weird, too. I'm not a comic writer. I can be funny, intensely funny (at least to myself) when I'm really 'on', but my humor is normally extemporaneous. I'm an improv guy, not a scripted guy. Yet I can hardly get up in front of a couple of thousand people who are expecting all the pomp and majesty of the Hugo Awards and riff for twenty or thirty minutes on whatever pops into my head. Or more to the point, I could do exactly that, but it wouldn't be the Hugo Awards ceremony, it would be the Jay Lake comedy hour. Meanwhile, poor Ken would be standing there in his plaid muumuu with his electric ukelele wondering what the heck happened, and the Renovation people would be gathering pitchforks and torches backstage. Not to mention the Hugo nominees...

My point being that I'm writing to a market. A very specific market, with very specific requirements and expectations. Being funny is definitely part of the job. Really, why else would you ask me and Ken to co-host something? But a much bigger part of the job is respecting the traditions of the awards, honoring the nominees, meeting the requirements of the convention, and giving the audience the show they came for.

Doing all that and being funny at the same time, now that's hard. Doing in writing two months in advance...? Speaking as a cancer patient in his fourth year of treatments, dying is easy. Comedy is hard.

See you all there. We'll have a hell of a show.