Dial-Up Modem Noises Slowed Down — Ok, this is cool. Haunting memories, so to speak. (Thanks to .)

A hole-punch cloud — An awesome photo from NPR. (Thanks to .)

Most asinine Beatles song ever? — The Beatles and taxes. As far as paying taxes goes, I kind of like living in a civil society myself, with roads and bridges and fire departments and schools. (Via Steve Buchheit.)

Chicago Pride Parade marches on after tires slashed on 51 floats — More principled conservative action on the subject of marriage equality, I see. Nothing like reasoned debate from an objective perspective to .. Damn, I can't write that with a straight face.

?otD: Would you rather hunt snipe or snark? 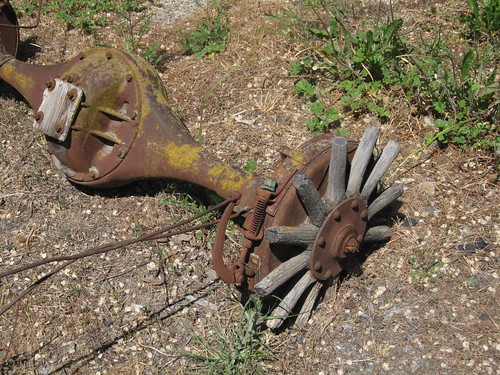 went to the doctor last April for a routine well child visit. As it happens, we get our medical care through a teaching hospital and its associated clinics. She was seen by a resident, not a staff physician, as happens in teaching hospitals.

I have since been billed three times for the visit as 90/10 co-insurance pursuant to her deductible under my plan, even though wellness visits are 100% covered under my plan. I have called the hospital's billing department twice, and the insurance carrier twice, and a third time just yesterday afternoon. At this point, I've invested about four hours of my time on the telephone disputing a charge of $85.89. In that time I've been told twice this would be resolved. Yet the bills keep coming.

The problem comes down to this. Because she saw a resident, the visit was billed as "Clinic Services", not "Physician Services". Residents don't have something called a "physician billing code", so they can't be billed as "Physician Services". So even though the service provided is clearly identified to the insurance carrier as a well child visit, because it's not associated with a physician billing code, it doesn't fall under the 100% coverage.

What the hospital billing department told me was that in the future, I should request a staff physician rather than a resident if I preferred the visit to be fully covered.

They said this with a straight face.

Is this what the GOP is always on about when they tell us healthcare consumers to be "wise shoppers"? Because this is a perverse incentive to avoid the residents, who are presumably there to learn, and which process I fully support. But not at an extra $85.89 a pop for the privilege of helping them learn.

This is lousy customer service on the hospital's part. It's lousy educational policy on the medical school's part. It's a stupid problem on the insurance carrier's part. And it's already cost me more in the value of my time to pursue this problem than if I'd just shut up and paid the damned bill in the first place. In four hours of effort I could have written, revised and sold a 5,000 word story for $250, covered the cost of the visit and had enough left over for one of my hotel nights at WorldCon this August.

So please explain to me why ours is the greatest system in the world, and why any efforts to reform it are evil socialism? Because the crap I go through for my healthcare, of which this particular issue is one tiny fraction, doesn't look to me like the greatest anything in the world except the greatest FUBAR.

Or maybe conservatives enjoy mountains of extra paperwork, rebills and endless telephone calls with their greatest healthcare. Me, I'd love a single payer system. Simple, sane, and wouldn't affect my healthcare delivery one tiny whit. Too bad healthcare finance reform is our national psychosis these days. The current system nickels and dimes me to death.

Off to the infusion center before too long. Y'all know the drill. I'll be back to some semblance of functional sanity on Sunday afternoon, off to Omaha Monday morning.

Because yes, I'm just that way.