Southern lights greet ISS and Atlantis — This is cool.

Michele Bachmann officially leaves her church — Remember what a big deal Your Liberal Media made of Obama's connection to Reverend Wright?

State Rep Who Got A DUI With Stripper In The Car Calls It Quits — Guess which family values party he belonged to.

?otD: Ever been a bad liver? 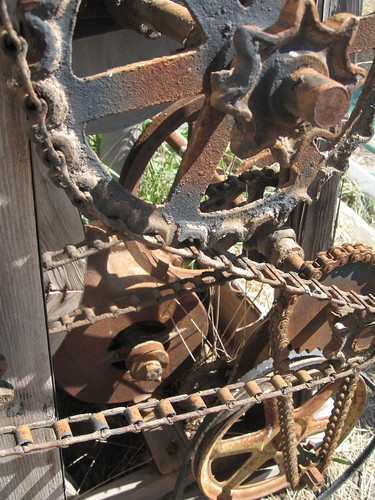 I'm going in this morning to have a right hepatic resectioning. That is to say, my surgical oncologist will be removing segment six of my liver. Thanks to my prior left hepatic resectioning, my liver has a rather atypical morphology. Loosely speaking, they're taking about 25% of the existing tissue.

This resectioning will excise a malignant metastatic tumor about the size of a golf ball. This is of course a continuation of the colon cancer with which I was diagnosed in April of 2008. The procedure tomorrow is my fourth round of major surgery, and accompanies my second round of chemotherapy.

I expect to be in the hospital six to eight days. This is a bit longer than normal for post-operative recovery, but we're dealing with my idiosyncratic lower GI problems in responses to anaesthesia. After last year's surgery, I had to be readmitted to the hospital for constipation, having gone eleven days with no movement.

Let me assure you that being admitted to the hospital for that particular complaint leads to some deeply unpleasant procedures.

So I was on a liquid diet yesterday preparatory to an evening bowel purge. They're not tapping my lower GI in this surgery, they just want me clean and empty. I'll be on IV feeding for some days post-operatively, then I'll be on a liquid diet again until my lower GI is properly functioning. This likely represents close to ten days without actual solid food. I am overjoyed.

Also due to my lower GI responses, we're going on a significantly different pain management regimen this time, with the intention of minimizing my opiate intake. It appears to be the opiates that cause such a nigh catastrophic lower GI shutdown for me. I believe I'll be on intravenous Tylenol among other interesting things. We'll see... the opiates are quite successful at pain management for me, as I respond well to them (other than Oxycontin, which makes me high as a kite and sweat rivers).

I'll be going in to pre-operative prep around 6:30 or 7:00 am this morning, and be out in recovery probably a bit before noon. From there I'll be transferred to ICU for a day. Assuming no complications or other issues, I'll move to a regular ward Wednesday afternoon. Prior experience strongly suggests I'll be looped within an inch of my life the first day or so, with a gradual return to awareness and some species of mental acuity in the days following.

The surgical plan is for open incision in my upper right abdomen and some relocation of my lower right ribs. Having previously experienced rib issues in surgery (my partial left thoracectomy of November, 2009) I anticipate than any nerve damage or rib pain will be the hardest thing to recover from.

My sister will update my blogs and Facebook and Twitter with surgical outcomes or any other important news. I don't expect to be back online for at least a few days, and likely when I re-emerge I won't make a whole lot of sense.

As I've commented before, I find myself oddly cheerful about the surgery. I figure at some point I'll start feeling more overwhelmed, but it's not like I haven't done this before.

So, well, here we go again.

I may be some time.

Lillypond (a/k/a/ Jay's sister) posting for Jay. Surgery went well, no unexpected surprises. He is currently in recovery and expected to move to ICU in the next 2-3 hours.

Lillypond posting for Jay, update from Glass Wing "The surgeon was pleased with how it went and was very optimistic about the out come. I'm sure Jay will deliver all the gory details as soon as he can. Apparently they kept a piece of liver for him."

Lillypond, posting for Jay, "I am alive and well and befuddled"
Collapse