Clinging to the rear view mirror — Roger Ebert on Marshall McLuhan and the generation gaps in media technology. Fascinating.

An open letter to Google — From a very angry and ill-used consumer. (Thanks to .)

New Tests for Newborns, And Dilemmas for Parents — The ethics of medical testing are fascinating and frustrating to me. I'm someone who would have been spared an enormous amount of grief if one of two two tests had been routinely performed on 40-year-olds, yet neither is or likely ever will be due to a combination of concerns over expense and over false positives. A real positive, for me, would have saved me at least three of my four major surgeries, which seems to me to be a small price to pay both systemically and personally.

A Revenge Plot So Intricate, the Prosecutors Were Pawns

Experts: Drone Strike Has the 'Hallmark of al-Qaeda' — Snerk.

The Purpose Driven Lie — Slacktivist Fred Clark on conservative contempt for the poor, and the lies conservatives and Christianists tell themselves to justify that contempt. (Specifically, the bizarre notion that the poor do not pay taxes.) He has a followup here.

The Help-Wanted Sign Comes With a Frustrating Asterisk — Excluding the unemployed from applicant pools is both morally disgusting and counterproductive.

Glenn Beck compares Norwegian victims to 'Hitler Youth' — Are you proud of your conservative movement? This is one of your leading voices, after all.

O’Reilly’s Muslim-Hatred and Christian Terrorists — The Norway massacre is uncomfortably close to the rhetoric and stated beliefs of the American Right. Suck on it, boys, you've been knowingly stirring this pot for years.

Conservative Media: Norway Shooter Is Muslim-ish — Erickson writes that while he was wrong, he was nonetheless justified in his assumption because Christians, unlike Muslims, do not commit politically motivated violence. I am sure that would come as a great surprise to a number of abortion clinics, their doctors and staff.

Graphic shows how Bush created deficit, not Obama — The Tea Party in particular seems convince that the deficit, along with the wars in Afghanistan and Iraq, began with Obama. Facts never have been able to interfere with a good, self-righteous conservative narrative, but this graphic is worth reviewing nonetheless.

Bloomberg reports that Boehner and Republicans voted for all the Debt they now Blame on Obama — This is surprise to whom? Besides FOX News viewers, Tea Partiers and other wilfully ignorant low information voters, I mean? (Via Tim Keating.) 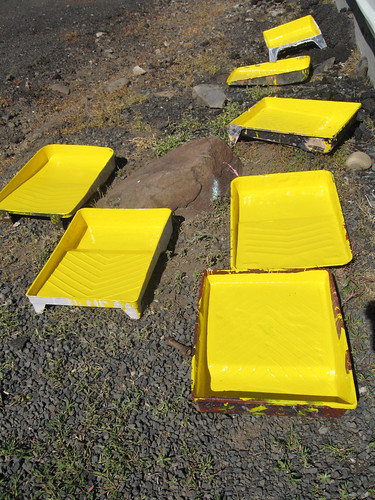 Having my railroad tracks removed today. No more staples for me!

And may I say preemptively, ouch ouch ouch.