What If Male Superheroes Posed Like Wonder Woman On The David Finch Justice League Cover? — Beverage warning on this one. (Snurched from @lilithsaintcrow.)

A Wall to Remember an Era’s First Exiles — Japanese Americans on Bainbridge Island.

Third-party challenge in 2012? Not likely, experts say — In our system, third party votes are throwaways. In 2000, a vote for Nader was effectively a vote for Bush, precisely the opposite of what the vast majority of Nader voters intended.

The tea party just cost you $322 — History is not going to be kind to the politics of our era.

The Madman Theory — Nixon was a liberal?

The Defeat of Flood Geology — Unfortunately, you can't defeat wilful ignorance. If it was possible to overcome that from the outside, the conservative movement would be a handful of cranks meeting in Denny's every Saturday morning.

Texas Rally Renews Debate Over the Boundaries of Perry’s Faith — This would be the same Rick Perry who when asked in 2002 how his faith informed his politics, he replied, "I don't think it does, particularly." The cynical opportunism of religious conservatives in politics isn't usually quite so blatant. Note that Your Liberal Media didn't mention this little fact in covering his commitment to religion in this election cycle. 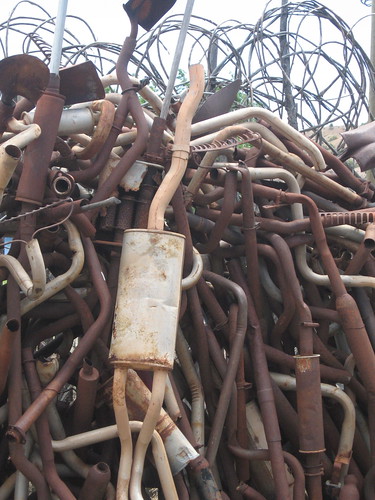 My writer's mind rarely goes on strike. Outside of medical issues, I haven't been blocked for more than a few days in a row since the late 1990s, when was an infant and required an overwhelming level of attention and care. Generally, on those infrequent occasions when I don't feel like I can work on a given project, I simply work on another project until the feeling passes.

So yesterday was unusual. I'd planned for several days to start working on Sunspin again. Time was set aside, with an absence of social or personal responsibilities. But when I got up in the morning, my backbrain went into full on writing avoidance mode. Which is such a rare condition for me that it took me a while to recognize what the heck was going on.

One thing I have learned over the years is not to argue with my subconscious about these things. There's almost always a reason, even if I can't see it at the time. I'm pretty sure yesterday's reason was something akin to mental exhaustion. I'd been back at work for four days for the first time since the surgery, my body is still far from well, and I needed to rest, my ambitions and schedule notwithstanding. I realized this in the late morning when I kept falling asleep while reading N.K. Jemisin's The Hundred Thousand Kingdoms. I'm enjoying the book a lot, she's not putting me to sleep with her prose, that was just my body going 'quit now'.

If I can't even read, I sure as heck can't write.

Not sure how today is going to go. One of my dreams last night was about an editorial conference with editorial assistant, in which we used random volunteers to block out various scenes in a fantasy novel I'd written about banking and trade flows. (In real life I leave those themes to Daniel Abraham, who does them startlingly well, but this was just a dream.) I figure if my dreaming mind is conjuring editorial meetings, that's a hint from my backbrain.

I suppose the point is, don't force the process. Push it, yes. Force it, no.

Please ignore this interruption of your reading day.