Próba obrzydliwości — A rather negative Polish review of the translated edition of Trial of Flowers, from a reviewer who also disliked Mainspring.

It Must Follow, as the Night the Day — Madeleine Robins on writers who don't read. Huh?

Uh oh! Netflix doesn't own the @Qwikster Twitter account — Glad to see they're on top of Marketing 101.

Capitalism, Animals, and the Ownership of Icons — This may be perfectly well within the law, but it's also nuts.

Is the World Running Out of Oil? — Poo pooing the Peak Oil hypothesis. Again.

Harvesting 'limitless' hydrogen from self-powered cells — US researchers say they have demonstrated how cells fuelled by bacteria can be "self-powered" and produce a limitless supply of hydrogen.

Circumbinary Orbits and Stellar Radii — "But I was going into Tosche Station to pick up some power converters!"

Fighting back against creationism — Hooray for scientists in the UK for having the temerity to fight back against the religious charlatanism of evolution denial.

'Don't ask, don't tell' formally ends — Openly gay people will now be able to serve in the US military after repeal of controversial 18-year-old DADT law. One manifest conservative injustice finally ends, at least. (Yes, I know DADT was a Clinton-era "compromise", but but it was a concession to rank GOP bigotry.) Watch now for all the alarmist rhetoric from the Right to completely fail to come true. As always.

Study Links Medical Costs and Personal Bankruptcy — Harvard researchers say 62% of all personal bankruptcies in the U.S. in 2007 were caused by health problems—and 78% of those filers had insurance. Unpossible! Everyone knows Rush said HCR was a socialist plot! Like I've said, in general, the people who oppose HCR are people who've never had to deal with the real consequences of serious illness. The conservative failure of empathy and imagination is firmly in play, along with some good old fashioned Calvinist/Christianist vindictiveness. (Thanks to .)

Through The Looking Glass: Bachmann’s Long History Of Strange Statements — The national media is now starting to figure something out: Michele Bachmann says a lot of things that aren’t just kind of crazy, but manifestly false. No wonder the GOP base has been so enthralled with Bachmann. She fits right in with FOX News' twisted version of America.

Boehner’s ‘Tea Party Challenger’ Really a Randall Terry Plant? — Golly. Imagine that. The Tea Party being used for conservative political ends. No one could have possibly foreseen this.

?otD: I still got nothing. 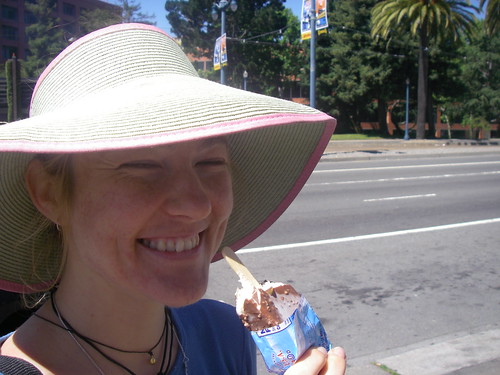 Here’s the two most cogent things I can say about the last night's continued lower GI distress:

First, there is nothing about this problem consistent with personal dignity, even when one lives utterly alone.

Second, as of the writing of this blog post, things are quiescent this morning for the first time since midnight this past Thursday night/Friday morning.

The worst fear, the one that has me starkly terrified, is that this is the new normal, and I'll have to go through this experience every other week through the next six chemotherapy cycles.

Yesterday, I posted an impassioned plea for aspiring writers to ignore writing advice. [ jlake.com | LiveJournal ] Therefore, being the logically consistent fellow that I am, today I am going to post some more advice for you to ignore.

What I really meant, of course, was that aspiring writers should learn to filter.

And that is a damned hard trick to pull. Right on the level with pulling yourself up in the air by grasping the scruff of your own neck.

Take me, for an example. When I first started trying to write professionally, back around 1990, I was convinced I was hot shit. I figured on being the next genius phenom bestseller as soon as I was discovered. And no one had anything to tell me that I needed to hear.

I exaggerate, but only a little. Obviously, this was before I reached the stage I described yesterday of taking everyone else's advice too seriously.

While not all writers go through it, this drastic overconfidence is a necessary stage for many of us. (The obverse of deep self-denial and self-deprecation that some people follow is often essentially the same phenomenon filtered through different personalities and life experiences.) It requires a staggering amount of ego to assume anyone wants to read what you have to say, let alone pay money for the privilege. That's true even as a well-established working professional author, as I am today. It's far more true of an aspiring writer in their earliest stages.

That ego, that drastic overconfidence, is the match that can set the fire. Because honestly, who would go through all this, the years of unrewarded effort, the endless criticism, the "when are you going to get a real job/do something important" comments from friends and family, just for the opportunity to run around pitching agents and editors in hopes of being that one in a thousand manuscripts that actually makes it onto a bookstore shelf.

But that same burning need, expressed as drastic overconfidence, for many years deafened me to good advice I did need to hear. It kept me from seeing flaws in my craft, in my art, in my professionalism. The same match that lit my fire blinded me to the course I had to follow.

(Parenthetically speaking, I'm awfully glad blogs weren't the done thing around 1994 or so, when I was suspicious and resentful that the only people who got published were the well-connected. It took me years to understand that the reason authors and editors all know each other is because they work together, not the other way around. Thankfully, all the dumb, self-defending, angry rationalizations I made to my workshop and my writer friends back then about why I wasn't getting published are not now memorialized forever in the Internet wayback machine.)

The best thing I can say now is slow down and think deeply, especially about the events and comments that annoy you or make you defensive about your writing, your process, your career. And try to do some metathinking about what you're filtering out, perhaps by recognizing moments in the past when the scales fell from your eyes and you were able to identify a blind spot.

And still I write.