Two Writers In Dialogue: A Conservative Evangelical And Gay Liberal Can Be Friends? Part 1

Two Writers In Dialogue: A Conservative Evangelical And Gay Liberal Can Be Friends? Part 2

Four years into the ebook revolution: things we know and things we don’t know

That’s it, I’m done with the﻿ internet for today. I think I’ll go outside. — Hilariously random YouTube video, not utterly worksafe or brainsafe for several reasons. (Thanks to .)

Invisible Ink Made Out of Engineered Bacteria

Fire in the Sky and on the Ground — The aurora australis, photographed from the ISS, and some Australian wildfires.

One third Of Sun-Like Stars Have Earth-Like Planets In Habitable Zone — Special creation my ass.

The Fraying of a Nation’s Decency — The things the article is talking about are fundamental outcomes of the application of conservative principles.

Obama Rips Perry, GOP Debate Audience: Not Who We Are — You’re damned skippy that’s not who we are. “Let him die” isn’t an American sentiment. It never should be.

Correcting the Abysmal ‘New York Times’ Coverage of Occupy Wall Street — More on this from Dangerous Minds. (Thanks to .)

Palin ‘on the Verge’ of Decision About Presidential Run — The circus is thinking about whether to come to town. That’s just what the GOP field needs — the kind of gravitas Palin can bring.

Romney and the “Apology Tour” — Conservative commentator Daniel Larison on Romney, foreign policy, and another of the stream of knowing, self-serving lies put forth by the GOP to rile their base.

?otD: Do you always cut your apples? 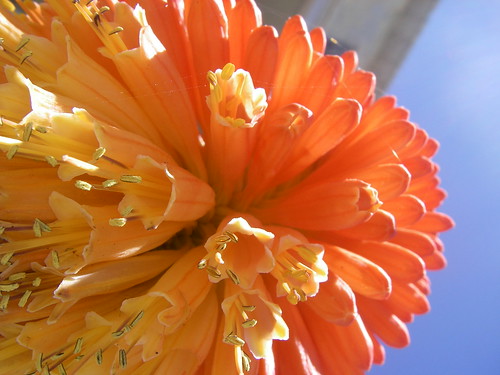 Home and quiet, still laying low from the immune system issues. Life goes on, and oddly for me, I don’t have much to say today.

So instead I’ll ask you. What’s on your mind? Tell me something about your day, your writing, your life. Phrase you answer in the form of a question if you wish and I’ll do my best to play Dear Abby.