Interview with Jay Lake — Since the vampire wasn’t available, writer and blogger Anthony Cardno talks to me instead.

The Encyclodpedia of Science Fiction beta is live online — Weird but cool to be reading about myself there.

How to Finish What You Start: A Five-Step Plan for Writers — For them what needs it. My mind just doesn’t work this way. (Via @Ruth_Nestvold.)

How to Spot Circulating Tumor Cells — Cancer cells that have broken away from the main tumor can spread the disease. Now scientists are developing better ways to find them. My problem, in a nutshell.

Ancient Lake in Antarctic May Reveal Clues About Earth’s Future

‘Last Chance’ skywritten messages over NYC not warning but an art project — People are idiots. What terrorist organization would announce itself by skywriting?

#OccupyWallStreet is a lesson on listening

Occupied Wall Street, Seen From Abroad — In the past month, it has been odd to read Twitter and blog posts from the Middle East taking the Wall Street protests far more seriously than anyone here has.

This Is Why We Can’t Have Nice Things — Ta-Nehisi Coates on the sterling ethics of conservative journalism. In this case, a disruption of the Occupy Washington demonstration.

Panic of the Plutocrats — I love the word “plutocracy”. It should mean “rule by cartoon dogs”.

David Barton is more influential than Jim Wallis — Slacktivist Fred Clark on the Religious Right. Yes, they’re real. Yes, they’re out there. And yes, they want to run your life. The true sin of the Republican Party is giving these people so much political and social power in their trolling for votes.

Liberal bloggers did not stage the Values Voter Summit — Nope, that would be Christianism on parade, proudly showing its worst side. Not that it has a best side.

Elizabeth Warren: Refuting Straw Liberals — What Warren has done is to make a proper case for liberalism, which does not happen often enough (Via David Goldman.)

The Myth of Voter Fraud — The New York Times on the GOP’s wholesale efforts at voter suppression. When you can’t win on ideas, block the votes. It worked in 2000 with the Brooks Brothers Riot and Bush v. Gore. Now they’re taking the act pro, nationwide. Nice to see Your Liberal Media acknowledging this blatant tactic instead of nodding wisely along to the latest Frank Luntz talking point as usual.

Glenn Beck Warns of the Coming of the ‘Violent Left’ — Projection much, Beckster? Someone needs to up his meds and spend some time in his quiet corner. This is the same conservative mindset that believes that that secular Western liberals are conspiring for the implementation of Shariate law. Guys, when you say things this blatantly crazy, it tars everything else you say as crazy, even when you are actually making sense. Sometimes I think the whole body of right wing conservative rhetoric with respect to moderates and liberals boils down to projection.

?otD: Is that all you get for your money? 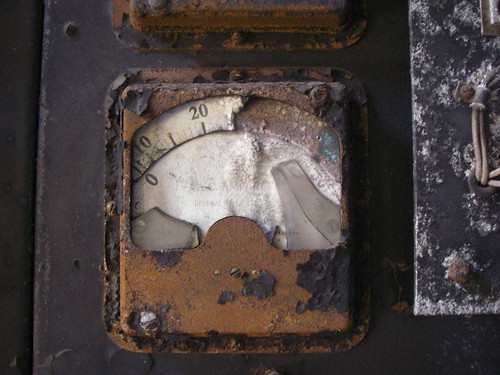 Chemo fog is beginning to slow down my brain, but I aten’t dead yet. Still reading, still writing.

On the reading front, I am currently consuming The Sky Road, the fourth book of Ken MacLeod’s The Fall Revolution cycle. Because I’m an idiot, I’ll be reading The Star Fraction (the first book) last. All the same, this is a cycle, not a tightly-coupled series, so that’s okay. I am loving these books. As I said on Twitter and Facebook yesterday, I find them to be “grim Scottish socialist SF, Riddley Walker meets The Moon is a Harsh Mistress, with bells on.” That is high praise. It’s also interesting stuff to read just after gulping down Iain M. Banks’ Culture novels all in a row. Plus the new Pratchett will be in my hands shortly.

In chemo terms, I’m not reading as sharply as normal, nor quite at my usual pace, but I’m still taking in the story. For now, I’m pleased.

Incidentally I have also conditionally promised to do a foreword for a nonfiction book and a blurb for a single-title novella, if brainspace holds up, but that’s practically a segue into writing.

I’ve got notes from various sources on the second draft Calamity of So Long a Life, the first volume of Sunspin. Amusingly, and pleasing to my heart, my Dad has been a very engaged first reader. I’m awaiting comments from my agent before I see how much a can worms I need to open here, and whether I can commit to whatever deadlines that implies. I do expect to hear from her this week on the book.

In the mean time, I’m slowly working through the outline of the proposed joint novel project with urban fantasy author J.A. Pitts, a/k/a . This is the book I’ve occasionally mentioned in jest about a werewolf with achondroplastic dwarfism. We’ve decided to actually write the damned thing, and see how it does in the market.

The series title is Little Dog, because that’s the protag’s (very insulting) pack name, and we’re working with Son of a Bitch as the the title for this book. It’s probably going to border on dark comedy, but we’ve got some real neat concepts coming to boil underneath, drawing pretty heavily on my medical experiences for both inspiration and verisimilitude. John’s skills as a character-driven writer are far sharper than my own, so while I’m doing the tippy-type drafting of the outline, we’re having frequent story conferences by email, SMS and voice wherein he’s showing me some pretty deep things about the narrative and characters that I would have been a long time coming to on my own.

The reality is the most we’ll get done this year is the outline. Chemo will be checking me out from writing soon, and I won’t be in a position to draft it. Such writer cookies as I still have need to be prioritized for Sunspin. But at a projected length of 90-90,500 words, it’s a project I can easily wedge into my spare time next spring as I begin the process of busting out the second and third volumes of Sunspin. Or if we decide John is going to write the first draft, it becomes a revision process for me, which is even easier to fit into my schedule.

So I guess I’ve sprouted another novel. Because there’s never such a thing as too much to do, right?

In the mean time, I read, write and wait for the chemo fog to close in so tight I have to shut down the control tower and be reduced to watching Netflix Streaming.

Inspired by Anthony Cardno’s interview with me, I think it’s time for another reader interview. Ask me questions in comments about my writing, your writing, life, death, cancer, parenting, advice to the lovelorn, whatever. Instead of answering them in-line, in a few days I’ll pull them together in an interview format and post it here.

So fire away. What are you itching to hear from me on?