on psychotic persistence and creative success

Avro Vulcan over the wreck of the B-24 “Lady Be Good”, Libya, date unknown — If you can't write a haunting short story based on this image, you're not really trying.

The Silver Lining of More Cancer Deaths — Well, yes, if you want to put it that way...

When Everyday Foods Are Hard to Digest — GI Specialists Suspect Specific Carbohydrates May Cause Painful Symptoms of Irritable Bowel Syndrome. I was diagnosed with IBS back in 2002, which in retrospect was probably a precursor to my colon cancer.

Autistic Kids May Have More Cells in Some Brain Areas — Most of these neurons develop before birth, which would go against the theory that certain vaccines or other environmental influences encountered after birth may cause autism. Except that's not a theory, it's crank hysteria. Calling the thoroughly discredited vaccine-autism link a theory is like calling Creationism a theory. Or the Tooth Fairy. It's an intellectually fatuous attempt to make your reporting appear balanced. (Thanks to David Goldman.)

24 Hours at Fukushima — A blow-by-blow account of the worst nuclear accident since Chernobyl. (Via .)

The Story of Broke: Rebuilding the American Dream — Must-watch video for those who will never watch it, because, you know, liberals are evil.

Understanding the nature of hypocrisy — A little primer for my friends on the Right. And my own thoughts on the subject, from a year or so ago: [ jlake.com | LiveJournal ]

?otD: Are your feets too big? 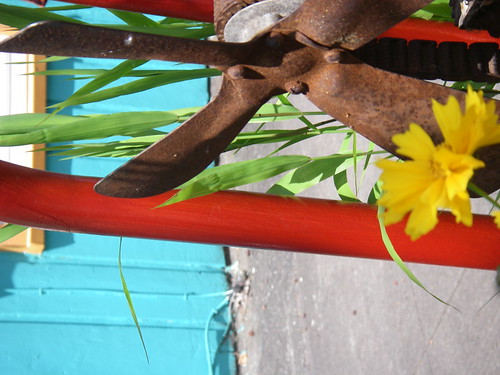 Extreme diarrhea is an expected side effect of the FOLFIRI chemo cocktail I'm on, but up til now I have not been afflicted with it. I can tell you that I am heartily sick of this. I'll be talking to my oncologist about this Friday — I can't imagine living with this for the next six to eight weeks. I'd like to not be living with it now.