A reader reacts to Endurance — They liked it. Interestingly, they read and enjoyed this book without having previously read Green. That pleases me.

The Tweets of War: What’s Past Is Postable — Re-enacting historical events on Twitter with realtime WWII. (Via my Dad.)

Fluorescent Spray Could Help Surgeons Identify Cancer Quickly — Having been the recepient of an erroneous surgical procedure which also missed an existing tumor, this might have saved me immense trouble. Though I wonder how much good it does for tumors embedded within healthy tissue, as opposed to on the surface of an organ.

Reverse Mentoring Cracks Workplace — Top Managers Get Advice on Social Media, Workplace Issues From Young Workers. I don't normally bother to link to the Wall Street Journal, which is basically FOX News for the 1%, with all the same lies and distortions of reality, but this is interesting and nonpolitical.

Flaming Napalmed Knickers — Language Log (again) on the completely and objectively false conservative meme that Obama uses "I" more often than other presidents, and is therefore a narcissist. I especially like this comment, which could apply to virtually all conservative allegations about Obama: Frankly, I'm disappointed in these people. Can't they invent new fabrications instead of tediously repeating old ones?

When Did the GOP Lose Touch With Reality? — Conservative David Frum: I can’t shrug off this flight from reality and responsibility as somebody else’s problem. I belonged to this movement; I helped to make the mess. Something very, very few conservatives are willing to say. Good for him for at least partially owning up to the hideous monstrosity the GOP has become.

The Price of Intolerance — It’s early yet for a full accounting of the economic damage Alabama has done to itself with its radical new immigration law. And it couldn't happen to a nicer bunch of small-minded conservative bigots. But I repeat myself. Reality, meet ideology. More on this in other Southeastern states pushing little brown people out in the name of pursuing immigration 'reform'.

Secret Bill To Be Voted On Today Would Allow The Military To Sweep Up US Citizens At Home Or Abroad — This is beyond disgusting. Where are those self-proclaimed Constitution-loving conservatives now? (Via .)

?otd: Would you have been married a long time ago? 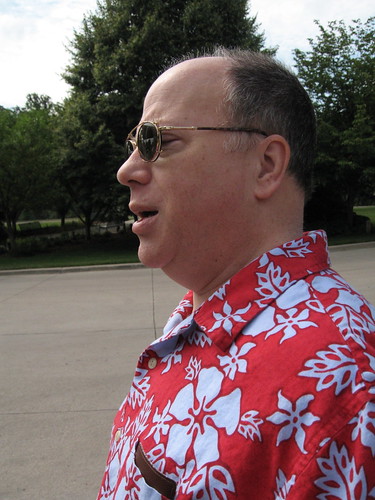 I am pleased to say that Sunspin novelette, "A Long Walk Home", has been accepted by the inestimable Gardner Dozois for reprint in Year's Best Science Fiction 29. For those of you wondering where this piece fits with the novels-in-progress, it's deep backstory, about the Mistake. So while it doesn't directly inflect the plot, "A Long Walk Home" definitely carries some of the world-building and future history.

I'm particularly pleased about this because it means Sunspin continues to receive favorable attention in the field. That hopefully will help drive the future reach and success of the novels.

If you'd like to read it now, the original appearance of the novelette at Subterranean Online is here. I also note with some pride and optimism that Subterranean Online will soon be running a Sunspin novella, "The Weight of History, the Lightness of the Future", which is in a sense chapter zero of the novels, and takes place immediately prior to the opening of the story in book one, Calamity of So Long a Life.

Further, I will make the observation that this novelette is probably my best candidate for Hugo or Nebula award consideration in the forthcoming award year. So if you're an eligible voter, please consider having a look at the above link.

See also my Facebook thread of yesterday for a number of comments on the sale.

I was emailing with someone yesterday and mentioned that it was eleven years from the time I workshopped my first story (summer, 1990) to the time I made my first sale (spring, 2001). (See my Facebook thread on this for a ton of comments from various folks.) In that time, I wrote one or two or sometimes three stories a month, sent out hundreds of submissions, and workshopped twice a month for most of the decade. That's the value of perseverance, right there.

It still amuses me that now, ten years after that first sale and twenty-one years after I got serious about trying to be an author, some people still seem to think I was some sort of overnight success. That's a long damned night. I am who I am today in my writing life and in the field because of years of toiling alone in complete obscurity, then slowly engaging and emerging into the company of writers as I earned my place with my efforts.

Do I have talent? In all honesty, I rather think I do. But talent wouldn't have gotten me anywhere without all those years of perseverance.

Do I have an easy, extroverted personality that helps me fit in and get along with damned near everybody who bothers to try to get along with me? Well, yes, but that's an artefact of my middle age and has nothing to do with the millions of words of first draft I've written. I was for many years young, socially awkward and unpublished.

Do I have good connections in the field? Yes, now after twenty-one years of effort, countless hours at conventions and workshops, and many publications in most of our major and independent markets. I didn't get published because I know people. I know people because I got published. A lot of times over the years.

Everything I've earned, my publications, my public persona in the field, my network of friends and associates: it all comes down to perseverance. Writing. Constantly. Last year, with six months of chemotherapy and a round of liver surgery slowing me down, not to mention a full-time job I never took off from during my illness and a teen-aged daughter in the house, I still wrote a quarter million words of first draft, and roughly that much again in blogging. Which wouldn't be a bad total for a full-time writer working with no major distractions. This year's numbers will be fairly similar, under fairly similar circumstances. That's what keeps earning me my place at the table. Not talent, or being fun at parties and a dab hand with a microphone, or knowing a bunch of writers and editors. Writing.

If you want to see your work published, be on panels, emcee the Hugos, get to know your writing heroes, all the fun stuff that goes with being a working writer, then, well, write. And write more. I've been doing it for two decades, and am still just as serious and hard-working as I was back at the beginning. More serious and hard-working, frankly. 1990 me would have been appalled at the prospect of writing an entire 250,000 words in year. 2011 me is appalled at writing only 250,000 words in a year.

Write more. Keep writing. Everything else flows from that.