From Jack Kerouac to Ayn Rand: Iconic Writers on Symbolism, 1963 — Including a squib from Ray Bradbury. (Snurched from Curiosity Counts.)

George Takei on Star Trek vs Star Wars — Hahahahahahah. (Via .)

How Doctors Die — It’s Not Like the Rest of Us, But It Should Be. This piece really made me think. (Via David Goldman.)

Eye Ball — A globe studded with cameras captures a panorama if you throw it in the air. :: wants ::

Photo of a Nuclear Explosion Less than 1 Millisecond After Detonation — Weird, haunting and cool in an eerie way. (Via @dduane.)

The search for the Higgs Boson: How does the Large Hadron Collider work?

Polar Bears Are Turning To Cannibalism As Arctic Ice Disappears — I'm sure Rush Limbaugh has an explanation of how this is another liberal plot. (Via .)

Gun accidentally fired at Atlanta airport checkpoint — Thankfully the gun owner's Second Amendment rights to his defense of essential liberties were being protected at the time. We all know that's the main reason for people to carry guns.

News Networks Regularly Promote Anti-Gay Family Research Council On Air — Because you know, that liberal bias and all.

When Cooter took on Newt — "Dukes of Hazzard" star Ben Jones tells Salon what it was like to run for Congress against "a great demagogue". (Via .)

The Disaster of a Gingrich Nomination — Conservative commentator Daniel Larison on everyone's favorite post-Cain GOP frontrunner. If the goal is to make sure that the general election is decided by popular disgust with the Republican candidate, he is the ideal Republican nominee. The problem, of course, with rooting for Newt is that he just might win. Remember, they used to laugh at Reagan. (I still do, but millions of people back in 1980 went insane and voted for the dangerous, senile old fool anyway.) 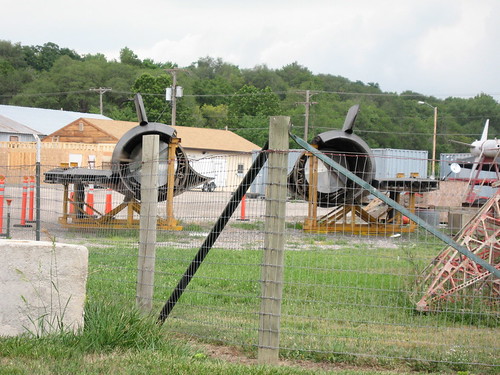 I've often used the metaphor of a car on ice when talking about chemo side effects. That is to say, much like driving on frozen roads, every nudge creates a slide in the other direction, which requires another nudge, which can create the equivalent of a fishtail and a skid, with gaping ditches threatening on each side, and darker ice ahead.

Well, yesterday I pretty much wound up in the ditch, and for a very stupid reason.

These last few chemo cycles my lower GI disruption has been very intense, especially in the second week. This is an expected side effect of the FOLFIRI, specifically the irinotecan anchor drug. We got that under control with diphenoxylate/atropine, also known as Lomotil. But I have to take a hell of a lot of Lomotil, the max dose (six tabs a day at the strength prescribed to me) for five to eight days straight, before things settle down. This for a drug on the controlled substance list that is prescribed to me in 30-tablet increments with no refills on the scrip.

So, well, do the math. Six tablets a day for five to eight days is 30 to 48 tablets. There are not 48 tablets in a 30-tablet prescription bottle. Due to a failure of planning on my part, I ran short over the weekend, when I could not get a refill because neither my pharmacy nor my oncology clinic is open on Sunday.

That meant I had to cut back the dosage, hoping for some effect. That in turn was enough for Lomotil's generally successful management of my epic lower GI disruption to slip. As a result, Monday was an absolutely ghastly day for lower GI function. I'll spare you most of the details, but trust me on this.

I was desperately on the phone to both the clinic and the pharmacy first thing in the morning yesterday. The clinic responded quickly but with the wrong scrip. Errors ensued. GI madness prevailed this whole time. Pills were finally secured after urgent error management was undertaken. The passive voice was used. Meanwhile, well, you know the rest.

Monday night was hell. I haven't slept more than an hour, which is very bad for me on chemo. As of about 2:30 this morning, my lower GI was back more or less in balance, having had at least thirty trips to the small room between noon Monday and the middle of the night Tuesday morning. I had to surrender my dignity once more and diaper up, because the onsets were so sudden and extreme. Everything hurts when you have to go that much, especially so violently.

It's a rough business. And this GI disruption is so intense that it could well cause me to have postpone a chemo session, as it has once before. This is the last one. I'm desperate to have done with the whole business. Pushing the last one back because I couldn't count ahead on my pills this past Friday would be absolutely horrifying. Pushing it back because I can't be prescribed enough pills for my needs due to insurance rules is just stupid.

Like a car on ice, I skid toward my destination. I'm also petty enough to look forward to a point when passing gas isn't a high-risk activity.

Probably the most significant gift I received at the family Christmas this past weekend was a quilt of my book covers. My (step)mother, my dad, my uncle and my sister designed and produced it, with the sewing done by mom. It's funny and flattering and loving and magnificent, all at once. And since a bunch of you reading here are crafty folks, I'm offering preliminary photos of this wonderful thing: 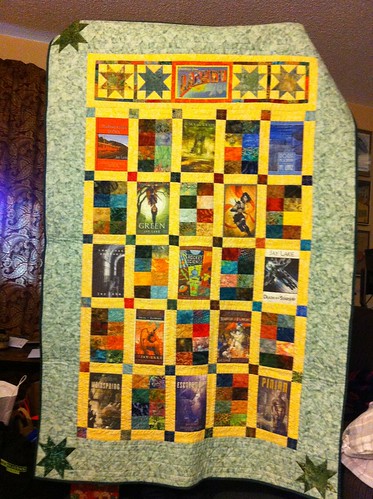 The front of the quilt, with thirteen of my book covers — better photos to come 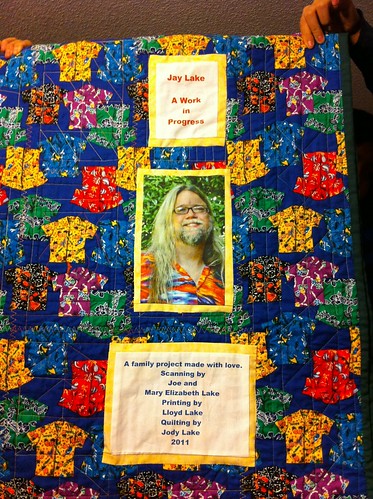 The back of the quilt, signed (so to speak) by the perpetrators

I wanted to hang it on the wall for display, but my gifters insist it's for me to use as a quilt is meant to be used. So I shall.

My family is so awesome.