Telegraphic language — Complaints from another era about the influence of media on literature. Always amusing to read this stuff, sort of like reading about Socrates complaining about kids today. His day, twenty-five centuries ago.

Raiding the Lost Ark — A “filmumentary” offering an in-depth look at the making of the 1981 collaboration between Spielberg and Lucas through behind-the-scenes footage, rare interviews with cast and crew, reconstructed deleted scenes and subtitled facts.

O Captain! my Captain! our fearful trip is done — Roger Ebert on the mortality of friends.

Obesity Linked to Changes In The Brain

Presidential campaign needs to get real on salvaging middle class — With the coming U.S. presidential election, 2012 offers voters, business leaders and politicians an opportunity for a joint debate over the fundamentals of capitalism in America. Not from the GOP, it's not. The Republican party is all about protecting the 1%.

Noting "Nastier" Attacks, Gingrich Will Make Adjustments — Mr. GOPAC Memo himself, the primary inventor of the modern no-holds barred attack politics that have significantly empowered unthinking conservative radicalism and did more to wreck our process of governance than any other modern human, is now concerned about electoral nastiness. Fuck you, Newt, and born-again Catholic horse you rode in on to fool the rubes.

2011 in Review — Stonekettle Station reviews many of the (as always) completely wrong hysterical conservative predictions for 2011. (Did you notice the mass exodus from the military when DADT was repealed? Because I didn't either. But there's no accountability for the bigoted asshole Republicans who shouted that from the rooftops for months beforehand.) Because, Your Liberal Media certainly never will hold Republicans accountable for the alarmist shit they spew. High snark factor, btw. (Via Steve Buchheit.)

?otd: Didja stay up til midnight? 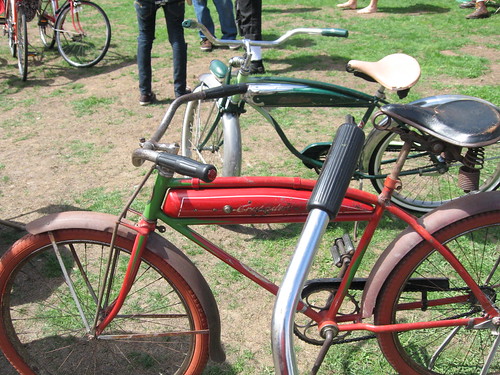 Laid fairly low yesterday during the day, watching Star Trek TOS on Netflix Streaming and browsing through Web comic archives. Brain isn't quite back to reading books yet. However, I did get crazy and go out last night with and Mother of the Child to a low-key, family-friendly New Years Eve party among 's school community. Ie, lots of friends and acquaintances of hers running around, lots of parents of current and former students. So I knew almost everybody, at least casually. Likewise, thanks both to my general open-ness on the topic as well as the death from cancer of one of the parents last spring, everybody was pretty aware of my issues.

I actually talked to people. Told jokes and stories. Listened to other people's jokes and stories. Swilled grapefruit juice and ate terrible food from the potluck table. ("Tasty, but not good for me" terrible, not "Oh my god what is this slop" terrible.) Generally interacted with 12 or 15 adults for about two hours, as if I was an adult myself and not some medical shut-in. By 8:30 I had a headache and could barely keep sitting up straight, so Mother of the Child drove me home while our daughter stayed and partied with friends, to catch a ride later.

I crawled into bed around 9, fortified by Tylenol and Lorazepam, (as well as my lower GI meds, as yesterday the lower GI horrors decided to return to my life). I felt physically lousy, had definitely pushed my envelope being at the party, but was still very glad I went.

My subconscious decided to reward me with a dream about being at an SF/F convention, probably Worldcon or WFC though the dream didn't specify, where I was being drummed out of the club, so to speak. I got detained by security, then thrown in one of those joke lock-ups except without being allowed to bail myself out, then (whom I will be seeing shortly IRL at Confusion) came and had a talk with me about how my presence wasn't required any more, but if I didn't know the reasons why, he wasn't going to bother to tell me now that it was already too late to fix things.

(This actually happened to me in my mid-20s, when a relatively long-standing friendship with a former college roommate ended abruptly with the rather grade-school statement, "If you don't know what you did, I'm sure as hell not going to tell you." Our mutual friends refused to say anything, claiming with horror they didn't want to get in the middle of it. Middle of what, no one would tell me. To this day, two decades later, I have no idea what happened, or what my former friend imagined had happened. Nor do I really care at this point, it just remains a baffling and saddening episode in my past.)

So I woke up thinking, "anxiety much?" Apparently I partied too hard. At least my headache is gone.

If one believes in signs and portents (I do not, except for those signs erected by the Highway Department), this dream would not be encouraging for the New Year. I don't have any ready-made interpretations for it, but feel free to take a whack at it. And at any rate, I made it out and saw people, like a real grown-up.