Advice on Writing from Modernity’s Greatest Writers — I like (but do not agree with) Mark Twain's: "Write without pay until somebody offers pay; if nobody offers within three years, sawing wood is what you were intended for." (Snurched from Curiosity Counts.)

Defining Words, Without the Arbiters — Unmediated lexicography. (Thanks to Dad.)

A Nigerian criticizes the 'First World problems' meme — As I have as well. (Via .)

States say it's time to rethink medical marijuana — I haven't bothered with recreational drugs in over a quarter century, but I still strongly favor legalization. Prohibition has been a disaster for everyone except law enforcement budgets and criminal profits.

12 Hangover Cures From Famous Heavy Drinkers — And speaking of drinking… Back when I occasionally drank enough to worry about hangovers, my cure was some vitamin C or orange juice, two aspirin or Advil, a Pepcid AC and a huge glass of water before going to sleep. Seemed to work pretty well for me. How about you?

International Linear Collider race starts in physics — Ah, big science. Too bad the US abandoned our leadership role in this stuff with the SSCL cancellation.

Will China Outsmart the U.S.? — The value of research and intellectual property. You know, that science stuff that the GOP voting base hates.

Manhunt in Mount Rainier park after US ranger shot dead — Another fine citizen exercising his Second Amendment rights to his defense of essential liberties. Aren't you proud of your NRA for helping make this kind of patriotism so much easier?

?otd: Back to work today? 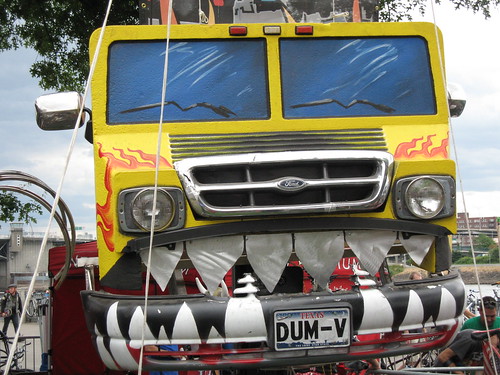 Yesterday I actually drove myself to the cinema, and watched Sherlock Holmes: A Game of Shadows [ imdb ]. For me, the joy of these movies is watching Robert Downey, Jr. chew rugs and whatnot. Their relationship to canonical Holmesiana seems to stop at the character names insofar as I can tell, but not being a Holmes purist, this does not offend.

In this film we learn various lessons, including the inadvisability of picking a fight with people who have a munitions plant, and the inadvisability of letting Professor Moriarty provide your tea. Minor spoiler alert. I'm not certain Irene Adler is actually dead, and I wonder if the French police of the 1890s would not have been capable of distinguishing death by gunshot from death by bomb blast … little niggles like that kept popping up throughout the movie, but I didn't care. It was too much fun watching Holmes ruin Watson's honeymoon, then generally misbehave across Europe. Plus Stephen Fry was hilariously fun as Mycroft, especially in the at-home scene between him and the new Mrs. Watson.

The whole thing was a slam-bang fest of nigh epic proportions, with loads of period piece fun and games for the Victoriana and steampunk fans among us. Much as with Mission Impossible: Ghost Protocol [ imdb ], the plot doesn't merit much if any intelligent interrogation. It's simply meant to be watched and enjoyed.

A thing I hear reasonably often from aspiring writers, and occasionally from established writers, goes somewhat like this: "I was working on this novel, when I had a better idea that caught my attention, so I quit after 40,000 words." Often this is followed by: "I have seven unfinished novels." Or however many. And optionally by: "I don't understand why I can never get anything to market."

I have to say people, finish what you start. There's always a shinier idea somewhere ready to come along and grab you by the shoulder. That's the nature of our imaginations, and it's a normal part of writing avoidance.

Look at me, now, with a 600,000 word project on my desk of which I've written 200,000 words only to be interrupted by chemotherapy. How could I possibly manage such a project if every neat idea I had in the mean time interrupted me?

I've written through parenting crisis, emotional disasters, mental stress and distress including anxiety and depression, busy times at work, illness, you name it. In the eleven years since I became a pro, chemotherapy and surgery are the only things that have been able to stop me cold, and believe me, if I could find a way around that, I would. There are no excuses except the ones you make up for yourself. Even with chemotherapy and surgery these past two years, I've managed about 250,000 words of first draft each year.

If you want to be an author, finish the project. Then write the next project. Being a pro is that simple, and it's that hard.

What is it that stops you from writing?