Why Men Need To Cheat — Interestingly, this entire article on men and sex is really making a strong case for polyamory without ever using the word or explaining the concept. Ah, the magic power of embedded assumptions.

Rare Gorilla Encounter — American wildlife photographer sits in awe and disbelief as a troop of wild Ugandan mountain gorillas coddle and groom him.

If them neutrinos are faster than light, physicists have a lot of work to do

Why can’t we use lasers as ray guns? — Mmm, laser-cooked bacon.

This Girl Snuck Into a Russian Military Rocket Factory — Some bad ass photos here. (Via .)

Report: Federal workers 'pressured' to approve citizenship papers — Anecdotally speaking, everyone I've ever known to go through the citizenship process (including , as a 1-2 year old) has had pretty much the opposite experience: endless and seemingly pointless delays and weird make-work bureaucratic impediments.

Frothing at Santorum — Bill Shunn rants, very much along my line of thinking.

Bain, Barack and Jobs — Mr. Romney and those like him didn’t destroy jobs, but they did enrich themselves while helping to destroy the American middle class. And that reality is, of course, what all the blather and misdirection about job-creating businessmen and job-destroying Democrats is meant to obscure.

Self-Styled Conservatives Run the GOP, Except When They Don’t — Conservative commentator Daniel Larison with a fascinating discussion of the GOP nominating process from a far right point of view. I always find him interesting, though sometimes he's way off base, like his recurring contention that Bush was not a conservative. So far as I can tell, that's the "No true Scotsman" fallacy in action, as Bush was a self-identified conservative elected by conservatives who governed from conservative principles in the most disastrous presidential administration in modern history. He sure as heck was no liberal, progressive or moderate. To claim now he wasn't a conservative is a cowardly effort to wriggle out of responsibility for horrendous failures of conservatism under Bush. 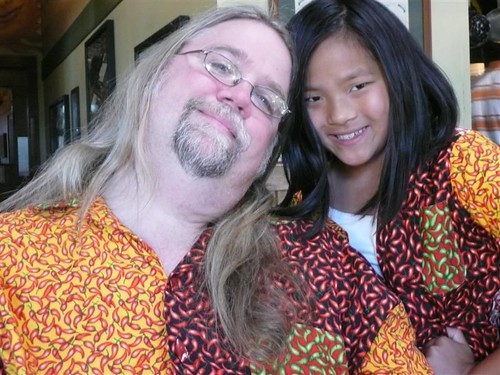 Once more with thanks to the generous folks who are sponsoring me to Epic ConFusion, here is my schedule.

I will otherwise be in the bar, the dealer's room or at parties. Find me and visit a while. Unfortunately, due to my needing to be at the airport midday Sunday, I won't be able to make any Sunday programming. See some, all or none of you there.

I've been watching too much Mission Impossible. In fact, and I watched MI III [ imdb ] yesterday evening, which quite clearly influenced my dreaming.

In my sleep, I was part of a strike team also composed of (a fellow Portland writer) and (of Schlock Mercenary fame). Our assignment was to kidnap a teacher (played by a dream person rather than someone from real life) from an American boarding school in Japan and bring him back to the United States. The three of us flew across the Pacific, and executed our assignment, also snatching his girlfriend and their three little kids. We wound up in a hotel near Narita airport waiting for our flight home, where bailed on the operation, and more or less went on strike.

It finally occurred to me that we hadn't grabbed our target's passport when we snatched him, and I began to wonder how we were going to get him through Japanese immigration on the way out, or US customs and immigration on the way in. Then I realized I had no way to get him onto the plane without him speaking up and asking for help from the airline reps. So I went and took a shower with all my clothes on (no, I still don't know why), until the kids came and pestered me to get out of the bathroom so they could wash up.

Apparently, I'm not even capable of being an international superspy even in my dreams. As for those two rats on my team, gentlemen, I have to say I'm disappointed in your lack of commitment to my imaginary mission.