A reader reacts to the anthology Is Anybody Out There? — Including favorable mention of my Sunspin short story, "Permanent Fatal Errors".

Do you outline or are you a “pantser”? — The Shimmer blog's group interview of five authors continues.

An interface for navigating iPad ebooks that mimics the fluid, intuitive navigation of thumbing through the pages of a paper book.

A star that exploded but didn't die: the Great Eruption of Eta Carinae

What Happened At Heartland? — Further reporting on the cynical intellectual fraud that is climate change denialism. Nobel Intent with more on this, especially the money trail.

Drumming up a phony war on religion — When you don't have any ideas, run on social manipulation. It's the GOP way.A

?otd: How many people named Tabor can there be in American history? 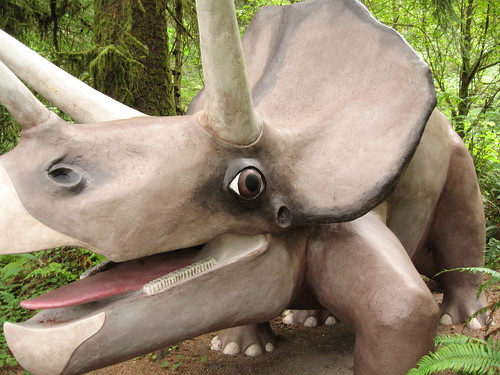 My CEAs came back at 0.7. This low-normal. For comparison, I was up around 8.0 when my previous metastatic tumor was first detected, spiking at about 10.8 prior to chemotherapy and resection — see the chart below. 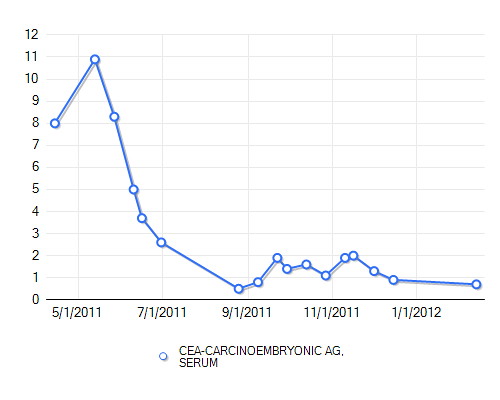 Had my CEA levels been high on this test, combined with the CT scan result, that would have been fairly conclusive evidence this is a tumor. However, the converse is not necessarily true. This doesn't mean the current mass in question is not a tumor, as my primary cancer presentation as well as my first metastasis both occurred without any spike in CEA levels. The next step is to check metabolic activity with a PET scan. If the mass is a steatosis, it won't light up the PET. If it's scar tissue from the last surgery, it will light up the PET but not as much as a tumor would.

So, an ambiguous but encouraging result. Now waiting to find out when I get a PET scan, or if my oncologist has some other advice.

ETA: My apologies, the mirror photo was unintentionally revealing, so to speak, which I didn't notice due the dimness of the image. I have corrected it.

The Day Jobbery went well yesterday. I also got some writing time squeezed in. Along the way, pointed out to me that while I'd just written a short story entitled "The Woman Who Shattered the Moon", he had recently written a short story entitled "The Woman Who Broke the Moon." We exchanged manuscripts, and I believe have agreed our stories actually have nothing in common except for the core plot element of the moon being missing. His is a lovely, refined piece of street level magic realism; mine is a shambling character study in a steampunk world of mad science and political vengeance.

This morning I woke up even earlier than planned, further evidence that my body is getting back on to its normal sleep schedule. Unfortunately, to reach the workout room in this hotel you have to go through the pool enclosure, and the pool doors don't unlock until 5 am. So I layered up with four shirts, a sweater and my trench coat, along with hat and gloves, and went walking on the downtown Denver mall in 26 degree weather. Breezy and very dry. Plus I hadn't brought sweats, so my legs were bare beneath my coat, which made me look like a very cold-resistant flasher on the move. 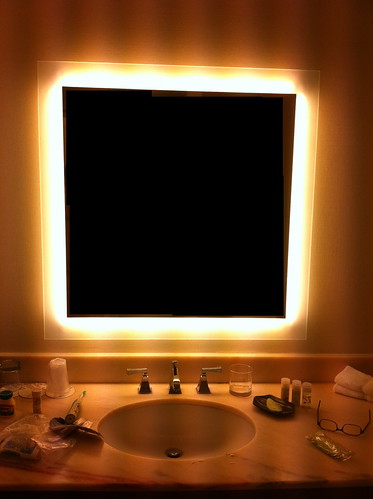 When I stand in front of it to brush my teeth, shave, whatnot, that square light reflects in my eyes in a very peculiar way. Basically there are two gleaming bright squares exactly bracketing my pupils. It makes me look like a slightly demented cyborg. I tried to capture the look, with partial success: 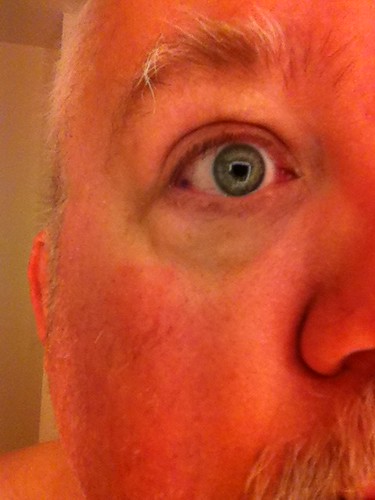 More Day Jobbery today, followed by tonight's open dinner at the Mellow Mushroom [ jlake.com | LiveJournal ]. I think there will be at least four of us there, so come on by if you're in the area. I'll also try to squeeze in some time on gearing up with final last-first reader feedback on Calamity of So Long a Life, Sunspin volume one, which effort will extend over the weekend and likely into next week. And off to Portland again first thing tomorrow morning, with hopefully more writing time on the plane.

I am pretty distressed about the cancer news. I feel like I'm on a roll with my writing, and my personal/social life is pulling together nicely. I just hate, hate, hate the thought of it all screeching to halt for another freaking year. Won't know any more before next week, so I'm just plowing ahead with all the things on my plate, head down and moving fast.

Death is on my heels once more, as he has been these last four years.