A reader reacts to the anthology Cthulhu's Reign — Not so much with the love for my story.

A reader reacts to the anthology Westward Weird — In which I have a story.

on themes in fiction — [A]ny verb that might occur to you while running out of supplies on the arctic tundra is a good verb to make a theme out of.

I am interviewed about the Writers of the Future Contest

The Subterrene War — An interesting approach to a book trailer. (Via Jeremiah Tolbert.)

King Street Station gets more rehab — A slide show of Seattle's railroad station. (Thanks to .)

Some Planets Are Alien Invaders

Are gluten-free products a waste for those without celiac disease?

Va. vote on abortion ultrasound bill pushed back a day — I suppose it's too much to hope that Virginia's GOP loons are actually embarrassed by their own extremism.

71% of Americans think Iran already has the Bomb (Also we used to have pet triceratops) — Welcome to FOX News America, where facts are irrelevant in the face of GOP talking points.

Sarah Palin: Media ‘wee-weed up’ about Rick Santorum — Sarah Palin came to the defense of Rick Santorum for his “Satan” comments as she condemned “lame-stream media characters” for getting “all wee-weed up about” the candidate’s past remarks. Right, poor Senator Frothy Mix. Yoyr Liberal Media has never gone after any Democratic politician for anything they've said in the past. Also, "wee-weed up'? Is Santorum running for kindergarten class president?

“A Funny Thing Happened on the Way to Santorum” — The evolving politics of an absolutist bigot.

Santorum: “You’re Not A Christian” — This guy really is a fruit loop, even by GOP standards. And that's a bar set so low I think it's buried in the ground.

?otd: Did she take you half the way there? 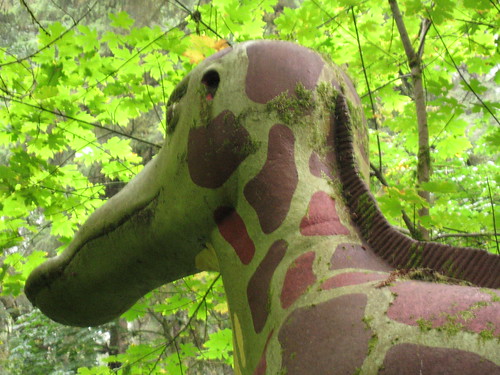 Yesterday I was having an email conversation with about structure, goal setting and accomplishment in one's daily life. It occurred to me, literally for the first time, that writing is what provides me with this framework.

And such a framework it is.

As it happens, I believe that everybody benefits from having purpose in their lives. Many of us get this through work, or if we have them, raising children. But I think we also need some purpose that simply rises from within ourselves. Essentially, that's what hobbies are. Mother of the Child gardens extensively, and produces visual and fabric art on an ongoing basis. My dad researches genealogy and family history. People do everything from build hot rods to volunteer at soup kitchens.

In all those cases, we're doing something for its own reward. And writing can very much be that way. I certainly get my cookies from finishing a story, or making a sale, or getting a positive reader reaction. That's not fundamentally why I write, but it's certainly part of that structure/goal/accomplishment cycle.

Over the past decade, I've managed to rewire almost my entire personal life around my writing. It's even infiltrated my parenting and my Day Jobbery to a degree. What I see now, in this discussion with , is that writing has become a key component of my life satisfaction, my happiness, and even my day to day mental and emotional health.

It's kind of a nice thing to open my eyes and notice.

I am off to see both my oncologists this morning. That would be my medical oncologist, who is the primary doctor on my cancer case, and the surgical oncologist who has now operated on my liver twice. This was supposed to be follow-up from last year's treatment, with both doctors, but now it's turned into a discussion of the meaning of and go-forward plan for last week's CT scan showing a new lesion in my liver. L— is taking me so I don't have to drive in my current nerve-wracked state, plus they can listen to the doctors in case I'm too busy freaking out to pay full attention.

As I said before, there's several things this lesion could be — steatosis and abnormal liver healing from the prior surgery are the two I'm aware of. Surely that will be a significant topic of discussion at both consults today.

But given my history, the likelihood that this is a new cancer is quite high. And I know what I want done. I want the damned thing out of my body right now, I want to KILL IT WITH FIRE!!! DIE!!! DIE!!! DIE!!!.

Not that I'm upset about this or anything.

I'm virtually certain I won't get what I want. As one of my various cancer surgeons explained to me at some point in the past, "Surgery is inherently high risk. We don't like to operate until the risk of not doing surgery is higher than the risk of going ahead with the procedure."

Given that we cannot yet demonstrate with a high degree of confidence that this new lesion is a tumor, that risk equation isn't shifted in favor of resection so far as I know. I'll find out more today. Plus I'm not sure how many times the liver can be resected. If this does have to be taken out, either now or in June, it will be my third liver resection in three years. I'll also ask about radiofrequency ablation, to see if that's an option for me. (And my thanks to both for originally explaining that procedure to me, and just lately reminding me of it when my post-chemo brain couldn't summon the details.)

I'm tired of being sick, I'm tired of being afraid, but I'm not tired of living, even living with cancer. Everything is in doubt right now. Those questions rise like dragons from the dark caves of my mind and skim low and menacing over the horizons of hope.