The last installment of Shimmer blog's series of Five Authors + Five Questions — This one on advice for newer writers.

SFWA is redirecting Amazon.com links — As usual, Amazon is abusing their market power to the detriment of authors. This is why I started boycotting them two years ago. If you love books and writing, consider doing the same.

Wayfarers: Quest for the Cure — Walking through Scotland in quest fantasy drag to raise money for cancer. (Thanks to Jason Block.)

How To Build A Speech Jamming Gun — Japanese researchers build a gun capable of stopping speakers in mid-sentence.

Oldest Arctic Sea Ice is Disappearing — A new study by NASA scientist Joey Comiso has found that the oldest and thickest Arctic sea ice is disappearing at a faster rate than the younger and thinner ice at the edges of the ice cap. The rapid disappearance of older ice makes the Arctic Ocean's sea ice cap more vulnerable to further decline. Nope. No climate change going on here. Nothing to see, move along citizen. Who are you going to believe, Rush Limbaugh or the hard data?

How do the Times and the Journal Report a Drop in Wall Street Bonuses? — We consume the media we consume in large part because it confirms our preexisting biases, even if we’re sure such biases don’t exist.

In Veritas Vino — Ta-Nehisi Coates on the latest bit of conservative racism. [T]his embrace of cruelty is arguably the dominant feature of the present conservative movement.

My family’s involvement with a criminal conspiracy — Slacktivist Fred Clark with a painful personal story about the rampant cleric sexual abuse in the Catholic church.

The growing intolerance of Mormon intolerance — Does it make you an anti-Mormon bigot if you're anti Mormon bigotry? Is it really a bad thing to be intolerant of intolerance? And in any case, the Mormon church is happy to enter the political realm, but it's somehow not right to treat them as we would any other player in politics. Why?

Romney Has Big Night; So Does Obama

?otd: Did you know Mark Bourne? 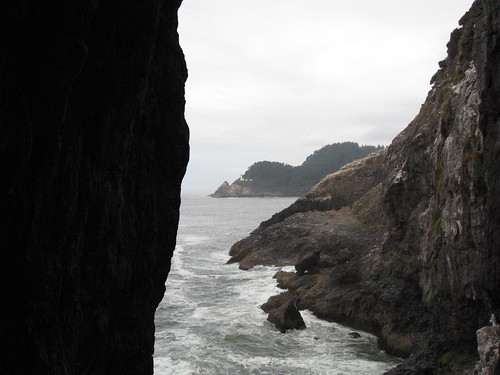 While I was in Colorado last weekend, we stopped in Salida for lunch. After a misfire at a noisy, crowded restaurant, we wound up at Moonlight Pizza, which has some of the best pizza I've ever eaten.

They're a microbrewery and pizza joint scenic downtown Salida, inside what looks to me like an old gas station. There's a selection of craft brewed beers, and interestingly, craft brewed sodas as well. I had a truly bitching limeade from the tap, something I'd never encountered. Some of my tablemates enjoyed the beers.

And the food… We ordered a capicola, prosciutto and mushroom calzone, along with their T-Guns pizza — red sauce, spinach, pepperoni, tomatoes, cream cheese and jalapenos. Wow to both of those. Just wow. The crust was rich, flavorful and tender. The red sauce was slightly sweet with a very nice seasoning that you could taste even through all the other ingredients. And the topping combinations on both dishes were just amazing. I'm kind of a nut for savory food, and this really hit the spot. Truly amazing pizza.

Moonlight Pizza is highly recommended if you're ever in that part of Colorado. 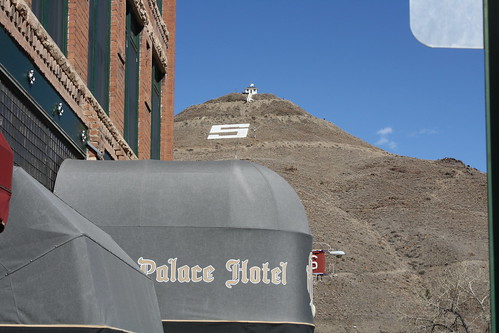 The view from downtown Salida 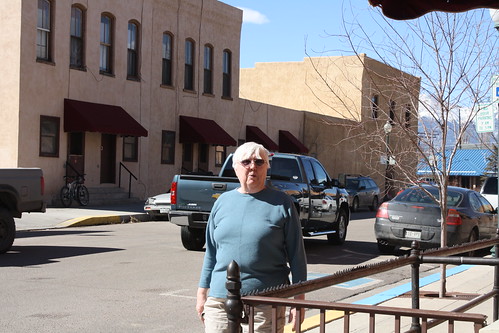 (a/k/a my mom) walking the streets 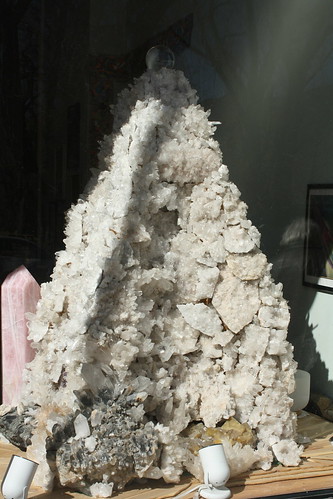 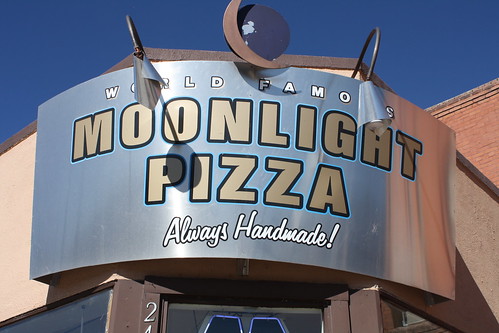 Moonlight Pizza its own self 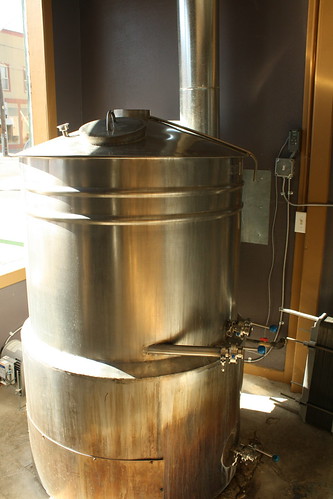 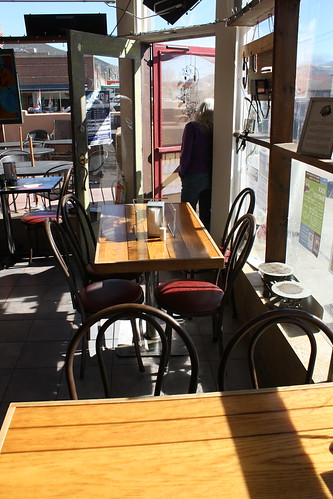 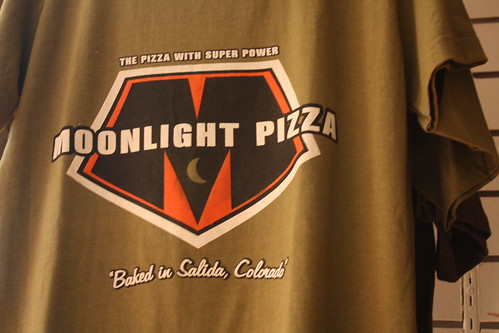 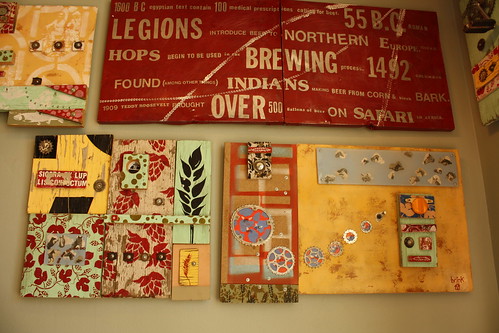 Art on the walls 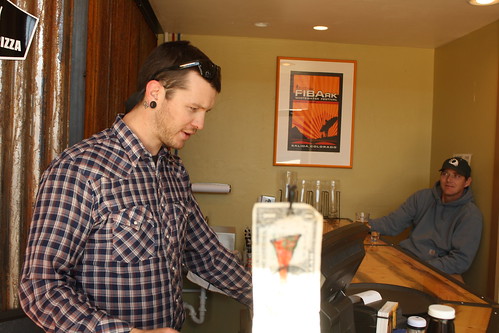 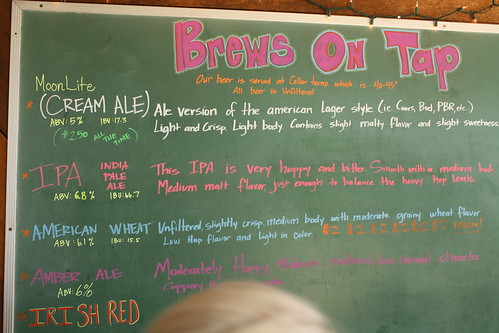 Part of the beer menu 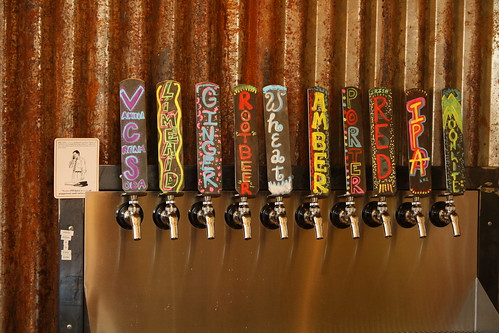 The taps their own selves 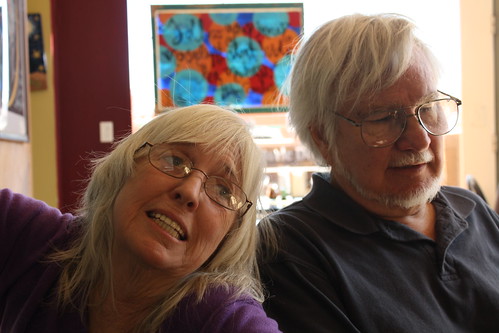 My aunt and her sweetie 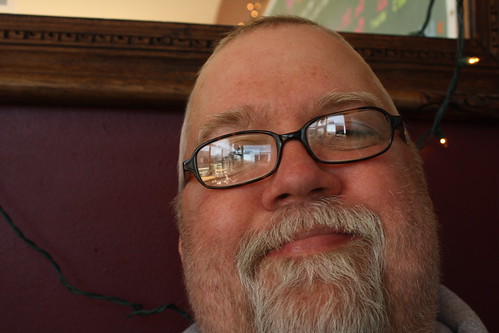 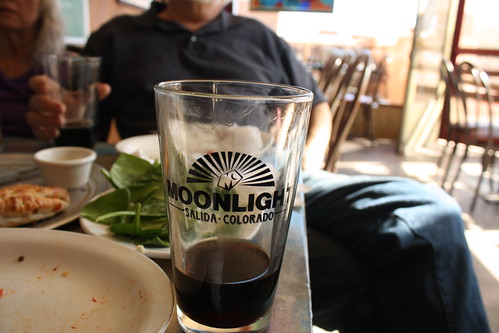 The remains of our table

Mark Bourne's funeral is this morning. and I will be heading over to West Seattle soon from where we're staying chez . I'll be delivering the eulogy. Which is one of the most difficult things I have ever written. I'm fairly certain I won't get through it without my own tears. This is for Mark, and for Elizabeth. They deserve my very best.

This afternoon I'll head out to the Rainforest. Connectivity can be intermittent there, so blogging may be disrupted over the weekend. See some, all or none of you today or tonight.