My story "Lehr, Rex" is reprinted at Apex Magazine — You can score the whole March issue at most ebook stores.

A review of The Modern Fae's Guide to Surviving Humanity — Including a short story from and me.

Question of the Day: Does a Lack of Exposure to the Arts Lead to Disaster?

Internists echo call for colon cancer screening — Most adults should get regularly screened for colon cancer between age 50 and 75, according to internal medicine doctors. Um, yes. Trust me, the alternative is beyond horrible.

Gas-filled aspirin is a potent anti-cancer drug — Really? (Thanks to David Shanahan.)

Quadrotor robots are a hit with James Bond theme song — (Thanks, I think, to David Goldman.)

For iRobot, the Future Is Getting Closer — (Via my Dad.)

Robotic Networks Among the Stars — Not six degrees of Kevin Bacondroid.

In today's warp-speed world, online missteps spread faster than ever

Have You No Shame, Rush? — Um, no. Not in the slightest. Do we have to ask this question at this point?

Not much excitement with GOP voters

Romney As the Nominee: Still Inevitable and Definitely Dreadful — What I don't understand, based on simple logic, is why so many people seem to think it will take another Republican president to get us out of the dreadful economic pit we fell into under the last Republican president. Contrast the state of the budget, the economy and employment at Bush's inauguration to their state after eight years of Republican misrule. If people could just remember, there wouldn't be another GOP president in our lifetimes.

There is no proper Left in American politics — A British perspective on the blatantly obvious. Which is why the Republican charges of Obama's "socialism" are so bizarre.

Obama slams GOP for casual war talk re Iran, stresses costs — Ask any conservative: it's un-American not to get down your shooting' iron.

?otd: Have you ever thrown your hand? 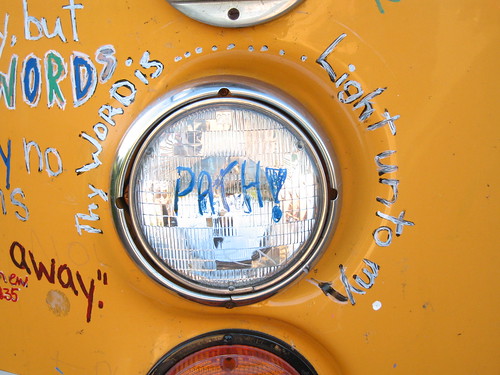 I spent some more time yesterday working on the book proposal for Going to Extremes. I had to write the initial draft of the summary, make some other edits, do some cancer statistics research, and begin dropping text into the first chapter for the proposal's sample chapter.

In a sense, much of this book is already written. My blogging trail on this topic is a deep reservoir of experience, emotion and first hand information I am already drawing on. Now I am finding the echoes of old pain and loss, past and current fears, everything.

Which of course is a large part of what this book is talking about. I'm in some danger of spiraling down my own navel on this one, I'm afraid, but I'm confident I'll stay on track.

Still, it's a pretty big challenge. And tackling the topic of death so soon after Mark Bourne's funeral seems odd. Like it or not, this is my life.

Ever since coming back from Rainforest Writers Village, I've been experiencing intermittent mild joint pain and excessive (but not overwhelming) fatigue. That's part of why I fell off the wagon on walking in the morning, though I have stuck to the stationary bike in keeping my basic body movement up. I've just needed to sleep a lot more than ought to be normal for me right now.

I thought this was me having overdone it over the weekend, but yesterday on the group mailing list it came out that a bunch of folks who were there had developed a full range of symptoms up to and including full on flu. As I had a flu shot last fall, it's quite possible I also got the flu but have been fighting it relatively easily. At any rate, it's good to have some explanation for my mild symptoms since returning.

Last night I had a classic anxiety dream. This was so mundane I hesitate to report the thing here, except that I find it amusing. I was living in the back room of a hip warehouse office in the imaginary downtown of some imaginary city that was a subconscious stand-in for Portland. Dad came by to see me, and I wanted to go back to his place to have lunch with him and Mom. I kept worrying about where all my cars were. I couldn't quite remember how many I had and where they were all parked. So instead we walked to the elevated train, except as we were mounting the steps to the station, I suddenly realized I was naked and they wouldn't let me onto the train that way. Dad handed me a towel, but it wasn't enough.

Exciting being me, ain't it?