Andrew Jackson’s Big Block of Cheese — This is hilarious.

Moving Target: Why a Cancer 'Cure' Is So Elusive

20-minute workout can alter your DNA for the better, study says — Epigenetics on the hoof.

Velociraptor's last meal revealed — The fossil is from Mongolia. (Via my brother.)

Researchers trap antihydrogen for insight into our matter-dominated universe

Scientists say they're closing in on elusive Higgs boson

What We Learned About Nuclear Safety from Fukushima

Contraception ignorance: Stupid or evil? — But Jesus told them!

On Birth Control and the Patriarchy — Never before in my adult life has an election cycle so obviously centered around women's rights and how the conservatives would like to roll back the clock on that issue. I can make my own choices about my family life and my health. I don't need Rick Santorum, Mitt Romney, Newt Gingrich, or Ron Paul to help me. (Snurched from Steve Buchheit.)

Why Does Santorum Stay In?

Even In France, Romneyland Locks Down Those Who Knew Him — …a fatal car crash that darkened his time there. Sort of like how we never talk about the fact that former First Lady Laura Bush killed someone in her youth. Can you imagine if that had been true of Bill or Hillary? We'd never hear the end of it from Your Liberal Media. 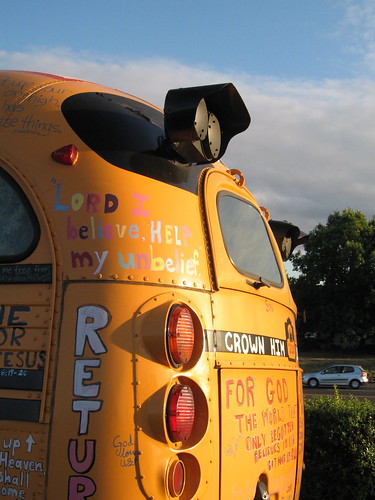 Still giggling over last night's dream. I didn't actually dream of writer Ted Kosmatka his own self. Rather, I dreamt of being trapped inside a highly secured game design facility (surface-to-air missiles for a developer of MMORPGs, really?) with my boss from the Day Jobbe, while a musical score accompanying my dream occasional erupted into the Ted Kosmatka theme song.

I don't remember the words exactly, but it sounded a lot like a 1950s advertising jingle, with the small studio orchestra and the six or eight voice chorus. And the end of every couple of lines, his name was used as a refrain, in multipart harmony, "Ted Kosm-a-a-atk-a-a-a". Even inside the dream, I found this to be pretty darned weird. I woke up laughing.

Seriously, I am giggling as I write this blog entry.

I was at Rainforest Writers Village with Ted last week, so that explains why he was on my mind. And Ted, my apologies for abusing you like this, but it's all true.

Today is my first of three (or possibly four) guest teaching appearances in 's eighth grade classroom. The theme of my multiple dates there is creative writing in a commercial career. I'll be talking a bit about my own career as an example, walking them through the building blocks the writing and submission process as practiced by professional writers (or at least by me), and taking them through a writing assignment for flash fiction which I'll then use their stories to edit a sample anthology.

It ought to be fun. I love doing this, especially for kids. And it's especially neat to be doing this for my own daughter's class. (Also, if you're in Portland or elsewhere in the Pacific Northwest and want me to do this for your child's classroom, let me know. We may be able to work something out.)