A nice review of Westward Weird — With favorable mention of my story, "The Temptation of Eustace Prudence McAllen".

The Collusion Case Against Publishers — John Scalzi is wise.

The QWERTY effect — Language Log on the supposed positive valence of rightside letters.

“The Women of the Future” according to 1902 French Trading Cards

A Dutch Angel’s Cellphone Number Is in Demand — Cryin' statues and spittin' images. (Thanks to David Goldman.)

It’s Not Junk if I Made It — Recreating Snack Cakes, Cookies and Chips at Home. (Via my Dad.)

DIY Kit Overclocks Your Brain With Direct Current — Transcranial Direct Stimulation works, and you can try it at home. What could possibly go wrong?

Why Aren’t There More Female Patent-Holders? — I will note anecdotally that I am an inventor of a commercialized patent, and I do not have an engineering or technical degree.

Feathers Worth a 2nd Look Found on a Tiny Dinosaur

James Cameron winning 'race to inner space' in a 'clown car' — I love this headline.

Entire nation of Kiribati to be relocated over rising sea level threat — The low-lying Pacific nation of Kiribati is negotiating to buy land in Fiji so it can relocate islanders under threat from rising sea levels. It's amazing the lengths liberals will go to in order to perpetuate their climate change scams. Luckily the Right has Rush Limbaugh and other ideologically correct voices to shield them from those pesky facts.

Pat Robertson Says Marijuana Use Should be Legal — Also, this just in: Monkeys have flown out of my ass. Wait, what?

Bullying, Cont. — Ta-Nehisi Coates with some cites on ant-gay bullying as sponsored by conservative parents and political leaders. The embrace of organized hatred and institutionalized bigotry is yet another of the myriad reasons I will never, ever be a Republican.

Rush Limbaugh's blind spot — It also may be why Limbaugh can't shake his paranoid hallucinations of trampy, castrating women. He doesn't have a clue what a real one is.

Women in Texas Losing Options for Health Care in Abortion Fight — Thank you, conservative America. Your misogyny couldn't be any more plain. (Via .)

The GOP is the place to be — Sometimes a picture really is worth a thousand words. Heh.

?otd: Will you hand me down my walking shoes? 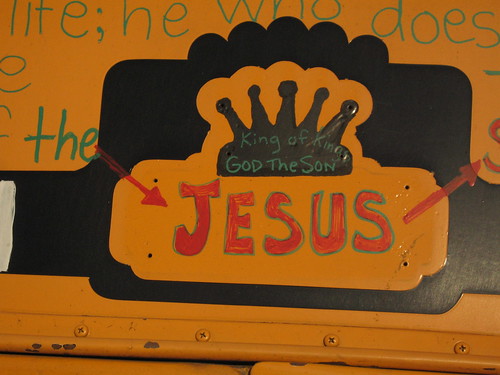 Chapter one of my sample chapters is in rough draft. This thing is raw, in several senses of the term. And it's a real challenge to write in a nonfiction voice. I'm basically treating this like a giant blog entry. Almost conversational. This as opposed to my usual rather stylized fiction voice. Which in turn produces the odd sensation that I'm not really writing, not really working.

Interesting problem to have.

You'd be hard pressed to tell that yesterday wasn't a vacation day. I did manage a full shift at the Day Jobbe, but I also taught at 's eighth grade class, put in 90 minutes on Going to Extremes, and squeezed in an entertaining if unsuccessful aurora hunt last night with and .

So about that day...

Yesterday on my lunch hour, I went to 's class yesterday and talked about creative writing for publication. That makes me sound so organized, doesn't it?

Going in, I did have a stack of my books for show-and-tell, and an outline of what I was going to speak to. The first round of questions largely derailed the outline, but that was fine. They were smart kids asking smart questions. And me, I'm pretty quick on my feet. I still managed to cover everything I had originally planned to. It was joy to talk to them. Ghu, I love Waldorf education.

I've left the kids with a homework assignment. We developed a character in a setting with a problem as a writing prompt, and they're to give me flash fiction stories next week based on that. Third session with them, I'll walk through the stories as if I were editing an anthology, talk about what I see, how I'd select them and order the table of contents, and so on.

Smart kids make me feel smart. And I managed not to embarrass my daughter, at least insofar as she's been willing to confide in me about the experience. I think it was maybe a little strange to be receiving homework from her dad, though.

Then yesterday evening we got a wild hair to head out to the Columbia Gorge and look for the aurora borealis. The sky had been pretty clear throughout the daylight hours, and this had been the warmest day of the year so far. In other words, we weren't going to be wet and miserable. I was already tired by the time it got dark, but what the heck. I'm trying to have fun here, people.

We knew the odds of seeing the aurora were pretty low at this latitude, but we thought the trip would be fun in its own right. So and I hied ourselves in the Genre car to pick up and we drove out to the Columbia Gorge. Once we got off I-84 onto the old scenic highway, we dropped the top and cranked the tunes, and enjoyed the drive up to the Portland Women's Forum park and Vista House. Those are both on top of the southern flank of the Gorge, with good views of the northern sky.

First, we had to stop and look at the dragon. 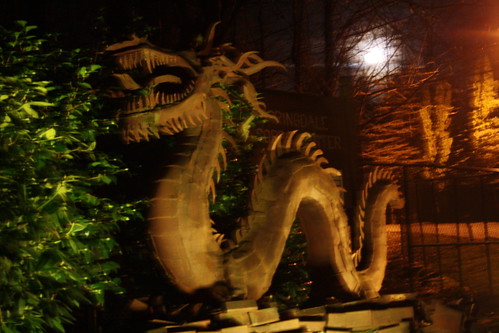 That's the (nearly) full moon in the trees behind.

When we got up to the Women's Forum park, we realized the northern horizon was occluded by clouds. We pooted around a while to see if they were moving on, and enjoyed the full moon some more. 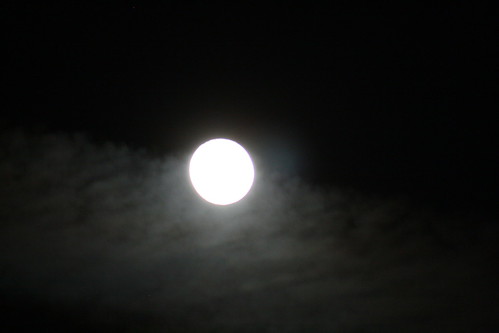 Oddly, the mountain was hiding. (It does that sometimes.) We did meet a fellow in the parking lot when we arrived who said he'd seen a few colored flashes in the north, but we never managed that. The light from the moon was amazing, and the Gorge at night is incredible to look at. Unfortunately, our camera isn't good at night time photography. did get a neat shot of I-84 running through the Gorge. 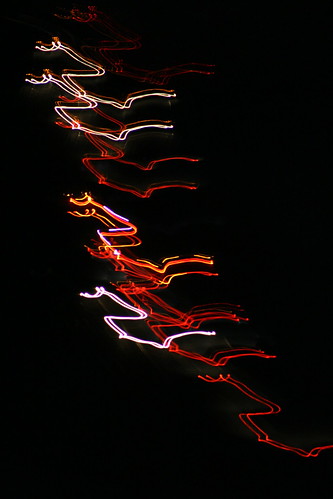 After a while we headed down to Vista House, but the wind was sharper and colder there, and the northern horizon no less occluded, so we punted and headed home.

Though I stayed up too late, it was a lot of fun. Maybe some other time for the aurorae.