Interrogating the Text #4: Jay Lake takes a “Long Walk Home” — A reader analyzes my novelette in some detail.

Penguin is hosting a Twitter chat with author Deborah Harkness on April 4th — I rather liked her book A Discovery of Witches.

But I Worked So Hard! — on the indirect connection between hard work and achievement.

What’s The Best Time of Day to be Creative?

Slipping on a Few Antitrust Banana Peels — Scrivener's Error with some deep legal napery on the DOJ's ebook price fixing investigation. Worth a patient read if you're interested in the legal/business nuts and bolts of the issue.

An Indo-European language tree — Interesting diagram. (Via my brother.)

“How to Make Friends by Telephone” ca. 1940s — (Snurched from Curiosity Counts.)

Digital Devices for Luddites — (Via my Dad.)

Mars: Boldly Going Where Lots Of Science Fiction Has Gone Before

How Do You Tell Time On Mars? — Synchronizing rovers on Mars with their drivers on Earth is a bit of a challenge.

Why open science failed after the gulf oil spill — Yes, clearly what we need is less regulation.

The Trees Are All Right — Republicans and nature.

How the Ghost of Jerry Falwell Conquered the Republican Party — Before Falwell, if liberals wanted to increase the minimum wage by one dollar and conservatives did not want to increase it at all, they could compromise and raise the minimum wage by fifty cents. Before Falwell, the American public’s ambivalence about abortion could find expression in the Hyde Amendment, which does not prohibit abortion but denies federal funds for the procedure. After Falwell, such compromises were seen not as part of the art of governance, but as a betrayal of first principles. After Falwell, conservatives could not entertain differences of opinion on many issues without being accused of political heresy. I've long said religion and politics mix poorly because politics requires compromise, while religion, especially the narrow minded literalism of American evangelicalism, rejects compromise as literally sinful. (Via Slacktivist.)

Rush Limbaugh vs. Bill Maher: Which one's words were worse? — Right. Because Maher has such a vast audience, and such a profound influence over a major political party. Unlike Rush, who's a B-list comedian with a C-list cable tv show and little political or cultural influence. No, wait. Did I get that backwards? God, how conservatives do love false equivalency. It lets them hide the venal horror of their beliefs from themselves.

No Game: Playstation Buying Lieutenant Gov Indicted For Ethics Violations — This is why we're supposed to vote Republican, right? Because godless liberals have no morals. At least, that's what's been shouted in my ear all my life. Glad to see the GOP is holding up their sterling ethical tradition.

'A Hug That the Media Won't Show' — Ta-Nehisi Coates on the latest episode of manufactured outrage from our friends on the Right. "Radical and bizarre" is a political movement which can't face up to evolution; is campaigning for president while standing in front of a flag of treason; is "Kenyan anti-colonial behavior" and "a secular atheist country, potentially one dominated by radical Islamists," Asserting that white supremacy haunts our legal institutions is mainstream for anyone with a serious knowledge of our history.

?otd: How does the light get in? 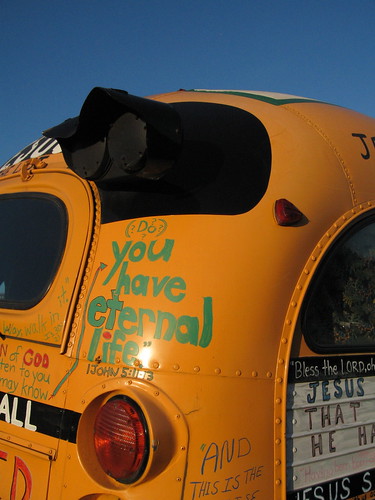 This morning I walked ninety minutes. That's the longest walk I've taken since before I got sick again in the spring of last year. I think I'm about ready to start hiking, hooray!

Today I am having a momo [ jlake.com | LiveJournal ] party for my family and a few friends. Much cookery and conversation will abound.

Tomorrow , and me are going downstate to Springfield to hear my friend Dave Raines preach. Yes, this atheist is going to church.

Somewhere in all this there will probably be more work on Going to Extremes, and a few other bits of WRPA maybe — I owe a blurb and an interview, among other things — but pretty much I am Having a Weekend. Like a normal person.