All about the milestones — Urban fantasy author J.A. Pitts with a contest to pick music for his lead character, Sarah Beauhall.

Science Fiction and the Probe

Cheap Solar Power at Night — Umm. Because the rates are lower?

The perils of sleep deprivation

Go to Trial: Crash the Justice System — Interesting view of a part of life that's largely invisible to me personally.

What's the difference between a vow of poverty and bankruptcy? — A Catholic school survivor talks about his experiences within the system.

Centrist Women Tell of Disenchantment With G.O.P. — Substitute "Centrist" with "Sane" and you have the real story.

Santorum: If Campaign's About Math 'We Are In Very, Very Tough Shape' — Ya think so, Senator Frothy Mix?

?otd: With a bit of the mind flip, are you into the time slip? 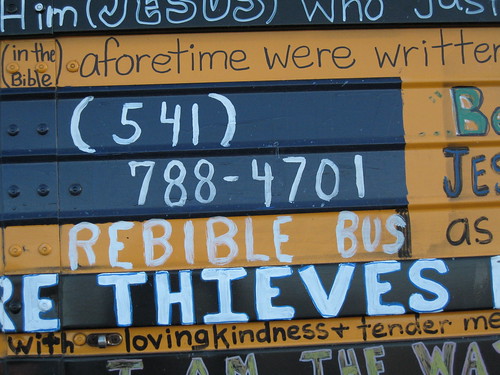 Yesterday, , and I drove down to Springfield, OR to hear preach. Dave is the pastor at the St. Paul Center United Methodist Church there. I've known Dave for a number of years, always liked and admired him, and finally made the time to drive 100 miles to hear him at his pulpit.

It was interesting going back to church. My Granddaddy Lake was ordained in the Disciples of Christ, and I was certainly heavily churched at points in my early youth under his influence. The Protestant order of service is quite familiar to me. Admittedly, the Methodists come out of a different provenance than the Disciples, but the basic patterns are very similar. The group experience, the singing, the shared interests — as always, I can easily see the secular side of what draws people together. (Though I did have to explain to that balloon animals were not an ordinary part of church.) Dave gave a good sermon on the Holy Spirit, the centerpiece of a lovely service.

Quite a few years ago I made the explicitly self-conscious choice to be an atheist, not an agnostic, for reasons that continue to seem eminently sensible to me. At the same time, I would be the last person to deny the role of spirituality and mythos in the human experience. As a result, I sometimes describe myself as a "low church atheist" — meaning I'm not out to deconvert anybody. I have an absolute respect for the right of everyone to worship (or not) as they please. My quarrels with religion have more to do with the way some believers confuse their private spiritual experience with good public policy, and try to insert their magical thinking into law. Most Christians wouldn't accept Jews attempting to legislate against the eating of bacon, why should the rest of us accept Christianists attempting to legislate their personal religious beliefs into law?

It's also the case that I don't want to impose my personal views of the universe on . After all, if I rail at religious conservatives for confining their children in narrow mental boxes, how big a hypocrite would I be to deny my daughter the same choices I decry them for denying theirs? If she feels a spiritual call, I'll do my best to help her seek out whatever voice it is that speaks to her from within. She had a lot of questions for at lunch after the service, where we met up with various members of the Wordos.

I don't yet know what this all meant to my daughter. To me, visiting Dave's church was a little trip into my own past, and a much-needed reminder to me, who so often views religion through a contentious political lens, that there are happy, sane religious people all over the place out there.

Saturday evening I was texting with (urban fantasy author J.A. Pitts) about how much we both liked Saladin Ahmed's Throne of the Crescent Moon [ jlake.com | LiveJournal ]. John observed that the book read like the fourth volume of a series, and compared it to the original Star Wars movie, now known as A New Hope.

This got me on to thinking about mature protagonists, a topic which has already been on my mind somewhat of late. Mature characters come with their own backstories, their own histories. (For that matter, so do infants, but in dramatic narratives, people with fully formed life histories are usually more interesting.)

Among my books, Rocket Science, Mainspring, Escapement, Pinion, Green, Endurance and Kalimpura all center around young protagonists. Death of a Starship and the Flowers books deal with people in middle age. (The Before Michaela Cannon, core protagonist of Sunspin's ensemble cast, is 2,000 years old, so she's a bit of an outlier.) With those younger protagonists, a major aspect of the story being told is their own journey to maturation and discovery of their life path. The older protagonists have a lot of backstory and implied action embedded in their preferences, desires, choices and reactions to the unfolding of the plot.

Certainly that latter effect is what Saladin achieved in Throne of the Crescent Moon. Hence 's reaction. Those characters had been around a long time, had experienced many prior adventures, had lived.

What I'm now chewing on is whether I think it's a bigger challenge to write a youthful protagonist or to write an older protagonist. How does this affect the reading experience? Green and its subsequent volumes would be very different books if she were middle aged at the time of the action. Some of the key underlying themes of Sunspin would be null and void if Cannon weren't literally the oldest human being who had ever lived. And Ahmed's Doctor Adoulla Makhslood wouldn't be anything like he is if he were still living in the bloom of youth.

Food for thought, indeed. What's your take, as either a reader or a writer, on the age of protagonists?