How to Deal with Writers Effectively in One Easy Lesson — (Snurched from here.)

Fundamental Law of High Speed Flying Manoeuvrability Discovered — That opens up the possibility of autonomous micro-air vehicles swooping and diving through cluttered environments like sparrowhawks through a forest. And doing it in the not too distant future. What could possibly go wrong?

Do Statins Make It Tough to Exercise? — Why and how exercise interacts with statins to cause muscle problems remains unknown, in part because it’s more difficult to study molecular responses in people than in animals. (People generally dislike muscle biopsies.)

The Forgotten History of Gay Marriage — In ancient church liturgical documents, he found the existence of an “Office of Same Sex Union” (10th and 11th century Greek) and the “Order for Uniting Two Men” (11th and 12th century Slavonic). That old time religion is good enough for me. (Via .)

Feds to Halt Texas Women's Health Program Funding — I am sorry it has come to this in my former home state. Thanks, conservative America, for holding women everywhere hostage to your personal religious beliefs.

Hey, kids! Anybody here not heard the F-word? — Roger Ebert on the movie Bully and MPAA ratings in general.

Obama compares Republicans to ‘Flat Earth Society’ for stance on green energy — “Why would someone who wants to lead the country ignore the facts?” Um, Mr. President, have you paid any attention to the GOP these past few decades? Evolution? Climate change? Supply side economics? Their entire worldview is based on willful ignorance and ignoring the facts.

The World According to Santorum — The insinuation that making our society more sustainable is favoring the environment over humans is absurd, especially because environmental activists are among those most concerned for our species’ future. Renewable energy, less reliance on fossil fuels—these are causes that should appeal to any thinking person, regardless of their religious beliefs. "Thinking" would be the key word here. The conservatism of the Republican base is reactionary and fear-driven, and proudly anti-intellectual and anti-science. Thinking really doesn't come into the politics of those GOP voters at all. If it did, we'd live in a much better world right now, because we wouldn't have experienced the economic, social and military disaster that was the Bush administration, and we would be responding far more sensibly to everything from economic pressures to climate change. 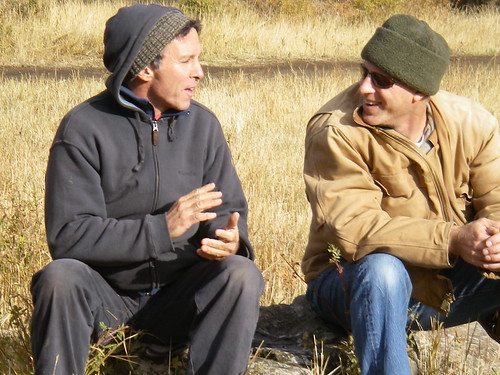 A lot of Dad time was required, and I wore myself out. I did have fun teaching at 's class again, and now have a sheaf of stories to read. We'll be making a print anthology through lulu.com.

It's also not clear to me that I'll get writing time today, though for better reasons. After Day Jobbery I must needs prepare for tomorrow's trip to Texas, and I'm having dinner later with and her brother.