Now Read This: Glamour in Glass by Mary Robinette Kowal — My review of 's new book is up at Portland Monthly.

Unique coat sale from long ago — This photo is very peculiar.

Swimming On The Hot Side — An elite team of nuclear divers are risking their lives to help save a troubled industry. (Snurched from Steve Buchheit.)

Fossil raindrops tell us a fair bit about ancient atmosphere

RFID Enables Study of Chicken Pessimism — That is my favorite headline of this week.

Etch A Sketch Starts Its Own Campaign — (Via my Dad.)

Judge Morality, Not Theology — Good luck with that one.

Broccoli and Bad Faith — Paul Krugman on the Supreme Court conservatives' willful ignorance on healthcare reform. {t}he idea for the mandate originally came not from liberals but from the ultra-conservative Heritage Foundation. (By the way, another pet conservative project — private accounts to replace Social Security — relies on, yes, mandatory contributions from individuals.) Partisan idiocy really is on the march at the highest levels. Scrivener's Error with more on this from a legal perspective, among other interesting things.

Scalia Echoes GOP Buzzwords Against ‘Obamacare’ — Yes, FOX News has a seat on the Supreme Court. I feel so much better knowing this country's judiciary is fair and balanced.

Lights on or off? Earth Hour challenged by Human Achievement Hour — Because conservation is unconservative, and being wise stewards of our world is something Jesus would totally put the hate on. Or something.

Just for living in your American skin — Slacktivist Fred Clark on conservative responses to the Trayvon Martin killing. [Liberals] are upset because a child was gunned down with impunity. That ought to upset conservatives too. I appreciate that the Republican Party ca. 2012 has a knee-jerk opposition to anything that President Barack Obama says, but just because Obama is saddened by the senseless killing of a child shouldn’t have to mean that Republicans should reflexively take the other side.

Obama Administration Oddly Scandal-Free — little over a year ago, Congressman Darrell Issa, who as chairman of the House committee on government oversight is in charge of investigating the Obama administration, called Obama's "one of the most corrupt administrations" in American history. Which is pretty rich, coming from the party of the Nixon, Reagan and Bush administrations. (Via , who is skeptical.)

GOP identity crisis worsened Romney's primary struggle — And it couldn't have happened to a nicer flip-flopper? Remember when the GOP thought Kerry's flip-flopping was the worst thing EVAR? Nah, neither do they.

?otd: Ever been up on Mount Hood? 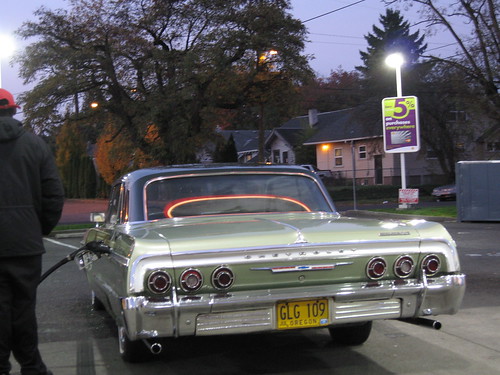 Some minor observations on customer service, including the good, the bad and the ugly.

When I was in Omaha last week, Hertz gave me a Toyota Camry with 3 miles on the odometer. The paper tag in the window had been issued that same day. The car had that funny new car smell in spades. I think maybe I've bought three brand new cars in my life, so that was kind of a neat experience. Not special customer service exactly, in that someone had to be the first to drive it, but it was fun in a trivial but pleasing way.

Flying home Friday on American Airlines, I was changing planes at DFW. When I got the departure gate for the Portland flight I had a friendly and funny conversation with the gate agent. I was just making sure I was at the right gate, because the display board hadn't been updated yet. He asked if I had a boarding pass, and I said yes, mentioning my seat number but not my name. A while later, when I went to board, as I got to the little scanner to have my boarding pass, he recognized me, smiled, and handed me a First Class boarding pass, thanking me for the conversation. The flight was oversold, so American, like most airlines, will bump people to empty seats up front if possible to clear more coach seats. And due to having flown over 1,000,000 miles on American I have lifetime premium status with them, so I'm certainly on the eligibility list for such an upgrade. What was nice about it was that he went to the trouble of figuring out who I was from my seat number.

In the cab on the way to the airport last Monday, at 3:45 am, I got a garrulous driver. As verbose as I am, even I'm not all that conversational at such an hour. But that's okay. Except what he wanted to talk about was essentially FOX News/Rush Limbaugh talking points concering (to put it politely) immigration, taxation and cultural issues. Now I'm political as all heck, and don't mind engaging at length with people of any conviction. (c.f. this post about my extended conversation with an Iraq war vet [ jlake.com | LiveJournal ]) But 3:45 am trapped in the back seat of a cab was not the time or place for it.

This morning I woke up to a notice in my email inbox that GoDaddy.com had billed my PayPal account for some domain names I had planned to let expire. What I've since been told is that their terms of service include an autopay renewal provision. This irritates me profoundly. I never knowingly sign up for autopay renewals, as I prefer to control the transaction. So shame on me for missing it. Nevertheless, this is an underhanded business tactic that tricked me into doing something I would never have chosen to do, and cost me money out of pocket. I won't ever be doing business with GoDaddy.com again, and strongly suggest anybody who is doing so should review their service agreements.

Of late, one of my favorite sites for finding cool, weird and serendipitous material has been Curiosity Counts. However, sometime in the past few weeks they underwent a site redesign. Individual stories are now tiled in boxes of random size that at least on my browser essentially rearrange themselves as you scroll down the page. I find the new presentation very annoying and almost unreadable. As a result, I've stopped using Curiosity Counts for a source for Link Salad. Which is a shame, because they were a nearly daily resource for me for a while. I did make a comment about this on Twitter, which the site curator responded to politely, but that seemed to amount to "we like our new look!" I'm glad they do. It's rare that a redesign of a favorite Web site is so annoying to me that I exit as a reader, but that's what happened here. Not precisely a customer service issue, but something that fatally affects my transactional experience with them.

In March, I had two acceptances, both nonfiction. One was a piece for the SFWA Bulletin, the other was a contribution to a book of writing exercises. That makes five first rights acceptances for the first quarter of 2012, two of which I haven't been able to announce yet, plus one reprint acceptance for audio rights. Not counting a couple of very stale submissions that I should probably withdraw or write off, I only have one other piece out the door right now for consideration. As I'm constantly telling other writers, if you don't submit, you can't be accepted. (In truth this mostly has to do with a combination of low short fiction output the last few years and the fact that much of what I have written has been for requesting markets, and most of that sells on first submittal.)

As of yesterday I am done with Calamity of So Long a Life (Sunspin, volume one), at least until there's an editorial letter on it. The book goes out to market next week along with synopses for the other three volumes. My profound thanks to all my first readers and commentors who've provided substantial aid on the project. I promise, I'll redshirt you all in future volumes of the series arc. Tomorrow or Monday I'll be diving into Their Currents Turn Awry (volume two), but as I've already got about 65,000 words of first draft, that book is well on its way.

Today, and I are off to Silverton with for a book signing and panel discussion Lizzy is having there. I've offered to be a drop-in on the panel, but only if they want me.

Next week, of course, is Norwescon. I'll be at the hotel in Seatac from early Thursday afternoon through early Sunday afternoon. If you want to see me, my schedule is here: [ jlake.com | LiveJournal ]. Or look for me in the bar. I'm always open to being taken to lunch or dinner, too, at least til my dance card fills.

On Sunday, April 15th, The Oregonian is scheduled to run a feature length profile on me in both the print and online editions. Except for my Locus interviews, this will be my most in-depth media exposure to date. I'll be quite curious to see how they present me.

Finally, there's some very neat stuff happening around the whole Going to Extremes project. Watch this space for details, but trust me, it's deeply cool.

I think that's about it for right now. No writing today, taking a brain break. (Or maybe not, but I haven't planned any writing time.)