Rick Kleffle, with a podcast including me reading a bit from the beginning of Calamity of So Long a Life

Why I hate the myth of the suffering artist — It is absurd and insulting to assume artists are assisted by despair or hunger in a way that, say, plumbers are not. (Via @ce_murphy.)

Copying Is Not Theft — Hmmm…

The Bacon Coffin — For when John Scalzi becomes a vampire. (Via my Dad.)

We Can Survive Killer Asteroids — But It Won’t Be Easy — Duck! And cover!

Programmable 'smart sand' can assume any shape — If you don't think this is cool, you are dead to me.

Flying car completes its first test flight, could be on sale by end of the year — 1970 called, they want their future back. Now, where's my jetpack?

Oil Scare Turns FedEx On To Energy Efficiency — Electric vehicles? Come on. Any Republican can tell you that's total Kenyan Muslim socialism. Even when one of American's leading companies is doing the investing.

Gay pride flag raised at a US base in Afghanistan — Go, go, go!

Charlie debunks 2012 nonsense — Why does this even need debunking? As profoundly counterfactual and willfully ignorant as evolution denial and climate change denial are, at least I can see where they're coming from in a cultural and political sense. But 2012 paranoia?

Wisconsin Planned Parenthood attacked with 'explosive device' — Remember kids, according to the Republican party, it's not terrorism if good conservative white people are doing the bombing and the killing.

Six dead in shooting at Oakland university; suspect arrested in Alameda — Thank god for the NRA and the GOP standing up for everyone's right to their defense of essential liberties.

A Return to... You Call This Sanity? — Scrivener's Error is interesting on ebooks and the politics of education. To start with, if you call anything that does not meet your preconceived notion from the hard Right "liberal" — including centrist positions a liberal might well call "conservative" — you're going to get a rather distorted picture. Then, too, exactly how does one judge the political orientation of introductory calculus-based physics? Is it a "liberal-oriented" course if it includes "modern physics"? How about if you offer a non-calculus-based alternative that mentions energy production as an example for study? Is a linguistics course that includes consideration of non-Western languages inherently "liberal", especially if it is not based on Latin and ancient Greek?

Permitted handguns will be allowed in RNC's 'clean zone' — oping to head off violent protesters during the Republican National Convention, Mayor Bob Buckhorn has proposed a litany of items that will be considered security threats during the week-long event. The list runs from air pistols to water pistols and also includes items such as masks, plastic or metal pipe and string more than six inches long. Conspicuously absent from the list of potential weapons: Firearms. Nice to see that conservative America still has its priorities straight. (Via .)

Social issues are not the Republican Party's problem – the gender gap is about healthcare, not sex — A British perspective, with a strong conservative bias.

Republicans are causing a moral crisis in America — It’s hard to point to a single priority of the Republican Party these days that isn’t steeped in moral failing while being dressed up in moral righteousness. [...] It is a very strange thing that the people who lecture most fervently about morality are those who are most willing to fight for policies that are so immoral. This is an emperor-has-no-clothes argument, one I've been making for years in vain given the conservative dominance of the "liberal" media and our political discourse.

Pink Slime Economics — [A] lasting budget deal can only work if both parties can be counted on to be both responsible and honest — and House Republicans have just demonstrated, as clearly as anyone could wish, that they are neither. This is news how?

Pressure grows for Rick Santorum to drop out as Obama surges in polls — Mitt Romney expected to win Tuesday primaries as GOP eager to end contest and shift campaign against the president. Amazingly enough, bugfuck conservative lunacy doesn't poll well with people who haven't already drunk the Kool-Aid. I know this will come as a shock to many Republican voters, but their worldview as expressed by Santorum is neither rational nor popular.

Obama Cautions Against ‘Judicial Activism’ On Health Care — “Ultimately I’m confident the Supreme Court will not take what would be an unprecedented, extraordinary step of overturning a law that was passed by a strong majority of a democratically elected congress,” Obama said at a Rose Garden press conference. “And I just remind conservative commentators that for years, what we’ve heard is the biggest problem on the bench was judicial activism or a lack of judicial restraint. An unelected group of people would somehow overturn a duly constituted and passed law. Well, this is a good example. And I’m pretty confident this court will recognize that and not take that step.” Silly president, assuming the remotest intellectual consistency or good faith from Republicans. It's only judicial activism when conservatives disagree with the outcome. Legislation from the bench is fine when it supports the conservative worldview.

?otd: Do you ever ever ever wanna be young again? 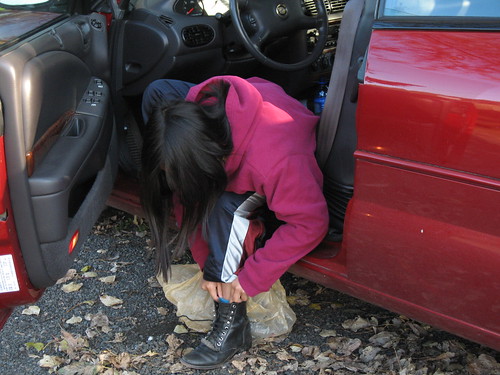 Last week I finished reading Scott Lynch's Red Seas Under Red Skies [ Powells | BN ], the second of his Locke Lamora books. I really admire Scott's writing. He combines an absolutely byzantine flair for plotting with a profound ruthlessness toward his characters which hits all my reader cookies, hard. Especially when wrapped in such lovely language. There were points in this book where I had to look away or even put it down, because I was so dreading what was about to happen next. At this point in my life, with my critic/author brain more or less permanently stuck in the "on" position, it's a fairly rare writer who can grab hold of me so thoroughly.

Action, adventure, conspiracy, magic, antiheroes on the hoof — what more could you want of Locke and Jean? I confess about 4/5ths of the way through the book I started to wonder how he was going to wrap it all up. Well, he did. The ending might have taken up a few more pages without annoying me, but in truth, this is a minor quibble.

Anent Scott's work, one of my favorite reader emails I ever received was regarding my own book, Trial of Flowers [ Powells | BN ]. The reader took me to task for writing such grubby, degrading prose and doing such awful things in that book (guilty as charged, btw), and asked me why I couldn't write something clean and fun like Scott Lynch's The Lies of Locke Lamora [ Powells | BN ]. Considering that in Lies people are drowned in horse piss and stuffed into barrels of ground glass, I can't think how anyone would think it was a cleaner book than Trial.

Prior to that, I finished reading the new edition of The Ethical Slut [ Powells | BN ]. If you're not familiar with the title, that's a lifestyle/self-help/inspirational book aimed toward people engaged in open or polyamorous relationships. I will comment that at least half that book applies to anyone with an active emotional or sex life, regardless of their particular lifestyle arrangements and sexual orientation. I recommend it highly on that basis if you're interested in exploring your boundaries or otherwise doing some hard thinking in those areas.

These past four nights or so I've been sleeping a lot more than normal. "Normal" for that value of normal which is me well away from chemotherapy and more or less in my baseline health. I'm not sure what that's about, as on the whole I've been feeling pretty good this past month or so. I'm just tiring faster in the evening, going to bed earlier, and sleeping longer.

My best guess is that I've got the edge of a minor bug and my body is busy shaking it off. Other than the cancer (ahem) I tend to be pretty healthy, avoiding or quickly shedding most colds that go around and whatnot. I suspect this is my immune system kicking up a fight. So I need to respect that. I never argue with my own need for sleep.

Still, in a weird way, sleep has become kind of triggery for me. On chemotherapy, the most explicit signal of my illness was the amount I slept. In the last month or so of treatment during this most recent cycle, I was sleeping as much as fifteen hours a day. Twelve hours per night, plus multiple daytime naps.

A surprisingly high number of my friends are insomniacs or otherwise have difficulty sleeping. I've had people express envy and even jealousy that I could sleep fifteen hours a day. Trust me, assuming you want to do anything else in your life other than sleep, it sucks, a lot, to spend that much time in bed.

For me, sleep is a barometer of my health. In my normal health, nine nights out of ten, I sleep fine. I go to bed when I want, fall asleep in moments, and wake up when I tell myself to wake up. I can be fully rested and charged up for the day on six hours of sleep. So when that begins to slip away from me, something's up.

And of course I'm worried about this new lesion in my liver. The follow-up CT scan and bloodwork are Monday, April 16th. I'll see my oncologists on Wednesday, April 18th. And then my life will change, losing another year to treatment; or it won't. The sniper is out there in the trees, taking more shots at me.

So at times like this I wonder... Is all this sleep my body fighting the cancer? My body succumbing to the cancer?

Thanks to the recurrent cancer, my life is like a clock running out. These hours of sleep are grains of sand tumbling to the bottom of the glass.