Game of Thrones and Political Cynicism — ZOMG! The streams are crossing! Also, interesting to see a non-genre commentator carefully explaining to a non-genre audience (on a political blog) something that seems obvious as air to this experienced genre reader and one-time student of history.

I am very real — A 1973 letter from Kurt Vonnegut to the chairman of a North Dakota school board who had ordered the burning of his books. This reminds me once again why I can never be a conservative. I have too much respect for other people to think the way conservatives think.

Autism Awareness is Not Enough: Here’s How to Change the World — (Via .)

A Little Device That’s Trying to Read Your Thoughts — Now this is future tech. (Via my Dad.)

Are Cancer Stem Cells Ready for Prime Time? — A flood of new discoveries has refined our definition of cancer stem cells. Now it’s up to human clinical trials to test if they can make a difference in patients.

Planets Around an Ancient Star — Deep time and planetary formation.

Researchers match modern ocean temperature records to those of the 1870s — And guess what they found? Ooh, those pesky facts, biased against the conservative worldview as always.

Prognosis — A physician talks about the possible overturning of the ACA. Even Tea Party supporters expect us to save their daughters' lives, and in that moment of bottomless panic, they don't give a shit whether or not they can clear the asset check when the ambulance docks at our door. As I've said before, people don't really like most conservative policies when applied to them personally. Conservatism these days is all about punishing the evil, undeserving Other while preserving Real America. Except we're all "the Other" when it comes to healthcare, and healthcare is about as personal as it gets. (Via .)

Why you — yes, you — should take Scalia’s place on the court — Slacktivist Fred Clark on Justice Scalia's apparently psychopathic lack of empathy as explicitly expressed in the recent SCOTUS arguments over the ACA. In which, I point out, Scalia is merely reflecting the current conservative ethos.

“One of Us”: Rick Santorum and the Politics of (Very Big) Family — It's stories like this that make it very hard for me not to believe that religious faith far too often renders people both stupid and crazy. (Via .)

The Nation: The Attack On liberal Legitimacy — Yep. This.

Republicans See No Rush to Fill $4.6 Trillion Blank in Tax Plan — U.S. House Republicans just passed a budget that would require eliminating $4.6 trillion in tax breaks over the next decade. They’re in no rush to show which benefits they would cut. Another example of how even Republicans know that people don't like conservative policies when applied to them personally. How are all those middle class Tea Party types going to feel about losing their home mortgage exemption? The GOP sure doesn't want to bring that up during the election cycle.

Why Romney is Lying About the Causes of High Prices at the Pump — In this case, knowingly lying instead of simply being willfully ignorant. It can so hard to tell the difference with GOP figures.

"I concur that climate change is beginning to effect on our natural resources and that now is the time to take action toward climate protection. " — A Mitt Romney statement, in writing, from 2003. Man, that John Kerry sure was a flip-flopper, wasn't he?

?otd: Your sanity and wits, have they all vanished? 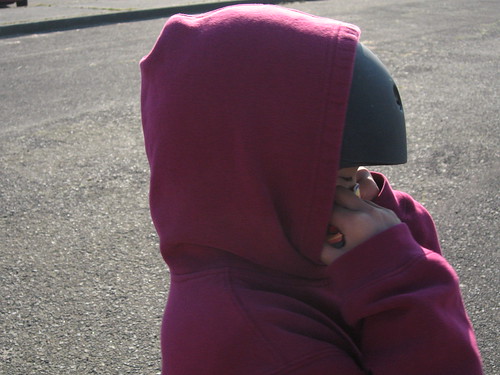 Diving into a substantial project for the first time, or back into it if I've been off for a while, always includes a moment of challenge for me. There's a point where I say to myself, "Whoa, I can't do that." For Pete's sake, I've written nineteen first draft novels. It's not like I don't know how to do the work at this point. There's just a sense of biting off part of an elephant. It's biiiig.

This happened to me yesterday as I geared up to once more start laying down significant first draft word count on Their Currents Turn Awry, Sunspin volume two. I'd spent the previous couple of days reading through the 66,600 words of draft I already had in the can. That effort got me back into the headspace of the books, the terrain of the characters. Yesterday, though, I needed to step off the edge and take the plunge into the next 70,000 words or so.

For one long, slow moment, teetering at the edge, I felt like chickening out.

I didn't. I never do. But the temptation is always there, right at that launch point.

In fact, I went on to write 4,500 words of first draft yesterday. Two character segments. With gunfire, and crashed spaceships sinking into the waters of a frigid mountain lake, and murder at a production studio. It's not like it wasn't fun, or interesting, or engaging, or entertaining. Writing (almost) always is those things for me.

The multitudes are marching. I will be for a while plural.

Tomorrow I'm off to Norwescon with and . My public schedule, for them what wants it, is here: [ jlake.com | LiveJournal ].

Saturday afternoon/evening is crazy, otherwise, my schedule is reasonable. I'll be relaxing as much as possible while also being in convention mode, if that makes any sense. Plus trying to knock in at least an hour a day on drafting Their Currents Turn Awry. Because, well, that's how I roll.

See some, all or none of you there.
Collapse