dumb all over. a little ugly on the side. — is wise about how one treats oneself.

Just One More Game ... — Angry Birds, Farmville and Other Hyperaddictive ‘Stupid Games’ Once reason I gave up computer and console gaming back around 1998 is that I am very susceptible to game addiction. I didn't want to spend my life staring at a screen. (Says the guy who writes obsessively…)

Woolly mammoth carcass may have been cut into by humans

Shake It Off: Earth's Wobble May Have Ended Ice Age — Which suggests a certain grandiose technique for dealing with the current climate change crisis we're having over here in reality-land, does it not?

Opinion: The Risk of Forgoing Vaccines — Herd immunity, or the protection of individuals who are not vaccinated due to generally high vaccination rates within a population, does not currently exist in many pockets of the US. Yes, anti-science idiocy isn't confined to conservative America. It is, however, considerably less privileged outside of conservative America. (i.e., Democrats don't troll for votes by valorizing the idiocies of the left, unlike Republicans and the idiocies of the Right.)

Acknowledging Climate Change Doesn’t Make You A Liberal — A Message From A Republican Meteorologist On Climate Change. No, it just means you live in the real world. (Snurched from @gregvaneekhout.)

Looking Ahead, Republicans Examine Options in Health Care Fight — What do you know? The GOP never had a plan, except "kill Kenyan Muslim socialism!"

Romney Accuses Obama of Hiding Agenda — Why? Because the accusation plays well with anti-reality conservatives. Kenyan Muslim socialism is subtle, y'all.

Debbie Wasserman Schultz: Mormonism off limits — Right, because Obama is that anti-religious Kenyan Muslim atheist who, um. No, I got nothing.

Republican Judge Flips Out at Obama — Suppose George W. Bush had managed to pass his plan to privatize Social Security, and liberals ginned up a legal challenge that everybody dismissed but gradually made its way to the Supreme Court and got a respectful hearing from a Supreme Court controlled by five Democratic-appointed justices. I suspect conservatives would be a tad upset. The mistake is assuming intellectual consistency on the part of conservatives.

Calling Radicalism by Its Name — President Obama’s fruitless three-year search for compromise with the Republicans ended in a thunderclap of a speech on Tuesday, as he denounced the party and its presidential candidates for cruelty and extremism. As I've said a number of times, the conservative worldview is a failure of both empathy and imagination. Obama said it better.

Words that blow your legs off — On language and political discourse. This is why you mostly don't see me jumping all over politicians for slips of the tongue or even open mic errors. Statements in writing, or contextualized in prepared speeches, are certainly fair game.

Why Conservative GOP Voters Aren’t Giving Up on Rick Santorum — The more the Republican establishment pushes Mitt Romney, the more alienated the religious right becomes. Why the party’s hard-core base isn’t coming around. And it couldn't happen to a nicer bunch of small minded, anti-reality bigots.

Does The Romney-Santorum Contest Matter? — Conservative commentator Daniel Larison on the last men standing the GOP field. I loved this line: The most meaningful difference between them is that one is an ideologue and the other is a liar. More Republicans seem to prefer the liar.

?otd: Did you just turn your back and walk? 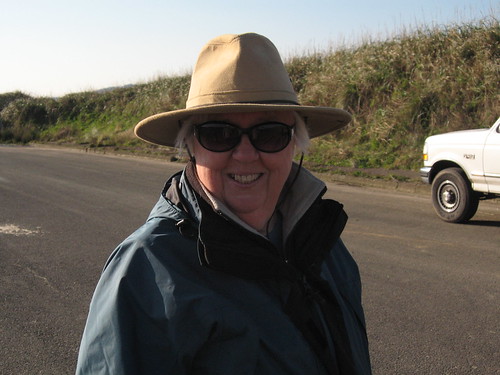 Yesterday afternoon, amid a frenzy of drafting Their Currents Turn Awry and packing for Norwescon, and I hied on down to the Lucky Lab on SE Hawthorne for an @ORNewsNetwork meetup.

@ORNewsNetwork is the Oregonian News Network, a blog syndication portal sponsored by Oregon's major daily newspaper. (Disclaimer: To state the obvious, this blog is part of that syndication portal. Hence me being at the meetup.) I'd worked with editors @georgerede and @corneliusrex online, but never in person. It was fun to meet them. Also met some cool bloggers, including @TheBugChicks, a pair of young, hip, funny entomologists, along with folks covering topics as diverse as urban foraging, consumerist issues and documentary filmmaking.

is a veteran of many conventions, conferences and other large-scale social venues, but this was her first meetup style event. She had a few nerves going in, but that was quickly dispelled. She did a lot of talking and listening, and I hope learned a few things. Amusingly, we also ran into a family from 's school while at the Lucky Lab.

As I said to the kiddo in the car on the way there, I'm doing my best to bring her as much experience of the world as possible while I still can, just in case I'm not here for too much longer. The meetup was fun for me, educational for her, and a good way to spend an hour or two on a Portland Wednesday afternoon.

I was thinking about this topic yesterday as I was packing for Norwescon, and realized that if I wanted to talk about it on my blog, I should do so before the convention. Because if I posted this after the convention, people would think I was being a passive-aggressive grump about something that happened at Norwescon. Which hasn't happened yet.

So here's me being a Ranty McRantypants about an issue that always bugs me, and is a very common problem at conventions. Probably I'll come off as a total crank, but, hey, it's my blog. I can crank if I want to.

See, I'm kind of a fiend about time. Barring major catastrophe or serious process failure, I am always on time to everything. Usually I'm early. Late is something that happens to other people. For the most part, this is my own private neurosis, and I deal with it pretty well. Since timeliness is valued in many aspects of our culture, this isn't even a dysfunction. (Though some of my close friends might argue otherwise.)

But that's when my time is my own. When the time belongs to other people, it transcends a private neurosis and becomes a matter of mutual respect. Showing up late for a meeting or a date is disrespectful of other people's time and effort. Not to mention wasteful. Making other people late for their meeting is even more disrespectful.

Yet over the years, I cannot begin to count the number of occasions where the reading or panel before mine has run long, right up to the transition point, or even beyond it. Which is profoundly disrespectful to both audiences (exiting and entering) as well as the pros scheduled to have the room next. And wastes the time of a hell of a lot of people.

Being who I am, after the first couple of years of putting up with this, I've developed the habit as needed of simply walking into the room about four minutes before the start of the next reading or panel and tactfully signaling that they need to cut it off pretty much right away. If I am ignored, I become a lot less tactful, though I am never rude. Just insistent.

When I do that, i sometimes encounter a lot of resentment and even outright anger from the audience. This is especially true of readings, where fans are listening eagerly to their beloved author.

You know what? The next author is beloved of their fans, too. And just because your author can't judge the time required for their own reading is no reason to steal time from the next author. Or from the people who want to hear them. We're all in this together, and everybody's time is just as valuable to them as yours is to you.

So, if you're a pro with a reading or a panel, please pay attention to the time. If you're a fan in that reading or panel, please remember that the next event in that room is just as important to other people as the one you're attending is to you. Being aware of time is just basic respect for the folks around you.

And if it's me coming in to the room to ask the event to wrap it up now, feel free to glare all you want. That's not going to make you or your favorite pro any less disrespectful of the next people who need the room, and mostly you're going to amuse me with your rudeness. To my mind, that sort of irritated response is of a kind with the notion that it's rude to ask people to stop talking in theaters, because you're interrupting their conversation — an inversion of social norms that makes no sense except in an utterly self-centered world.