A reader reacts to Endurance — Decidedly mixed but thoughtful review.

Fanfare for the Comma Man

New View of Depression: An Ailment of the Entire Body

How Dark Matter Interacts with the Human Body — Dark matter must collide with human tissue, and physicists have now calculated how often. The answer? More often than you might expect.

The Amazing Trajectories of Life-Bearing Meteorites From Earth — The asteroid that killed the dinosaurs must have ejected billions of tonnes of life-bearing rock into space. Now physicists have calculated what must have happened to it

How the Greatest Prankster in Political History Messed With Richard Nixon — Ah, politics. (Via .)

'A Recipe for Losing Touch With One's Own Editorial Faculties' — Ta-Nehisi Coates on Noah Millman on John Derbyshire. And I have to confess that firing Derbyshire for being racist was as puzzling to me as firing Buchanan. Why, after all these years of letting them be leading conservative voices with exactly the same message, does it matter now?

Karl Rove and company are losing the argument over inequality — Since, as usual for conservatives, they can't win this one on the merits of the position, the dirty pool campaigning will start.

Republicans Try To Erase The Contraception Wars — "And there was the perception that somehow Republicans are opposed to contraceptives,” Romney told Newsmax last week. That perception would be because Republicans are opposed to contraceptives, on the plain face of their own rhetoric and legislation introduced. There's no "somehow" about it, fool. The backlash on contraception is just another example of how people of all political stripes tend to intensely dislike conservative doctrine when actually applied to them personally. Conservatism is all about punishing the "other", not the conservative himself. 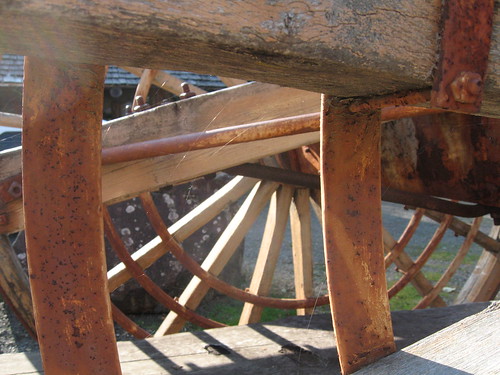 Yesterday I managed ninety minutes on Their Currents Turn Awry prior to Mary Robinette Kowal 's launch party for Glamour in Glass [ Powells | BN ]. Things are plugging along, and I'm very nearly at the end of the first third of the second half of this the second book of Sunspin. (Yeah, really.)

So, here's some WIP for y'all. The usual disclaimers about first draft-i-ness apply, of course.

I have a good friend back in Austin, Texas, who happens to be quite conservative. He's an intelligent, humane, reasonable guy, and a lot of fun, and except for this minor character defect is really someone I like and admire a lot. I once asked him why he was conservative. His answer was fascinating.

"When I was a kid," he said, "I asked my mom why we were Republicans. She told me it was because the Democrats wanted to take away our money and give it other people." (His parents were, and I suppose still are, small businesspeople who owned one or two restaurants.)

In a sense, that conversation set his opinions for life. He's spent the years since amassing logical reasons to be a Republican, but there's an emotional core underneath it all that's woven into the fabric of who he is.

Me, I'm a bad liberal in at least one important sense. I'm very uncomfortable with the power of unions. Now, before you jump all over me, let me state that as a thinking adult it's perfectly clear to me that unions have been a very important force in bettering the working lives of all Americans, and that such power as they ever had has long been gutted by decades of conservatives campaigning both at the legislative level as well as down in the trenches of dirty tricks and media smears. Millions of conservative Americans who would be appalled at giving up their weekends and paid vacations don't recognize that the only reason they have those things in the first place is because of union activism.

Yet in my case, two childhood events set me with a prejudice that I carry to this day. One, when i was nine years old, in 1973, we were back in the U.S. on home leave from Taiwan. Mom and Dad drove us across the country on a combination of vacation and various family visits. This concluded with a couple of days in southern California to visit Seaworld and Disneyland. We made it to Disneyland just fine, but the day we went to Seaworld the park was closed due to a strike.

Fast forward to 1981, me in high school, thinking pretty seriously about going to college to study drama from the backstage side and head for a career in technical theater. I thought it would be pretty cool to be a stage manager on Broadway someday. Our high school's resident technical director (we had one of those and two theatrical directors at Choate at the time) pulled me aside one day and explained that I could study drama all I wanted, but I'd probably never work in New York because I wouldn't be able to get into the union. You had to pass a test, see, and the test was graded by standards that weren't publicly disclosed. This made sure that the sons and nephews of union members could get in, even with lousy scores, while outsiders and other people the union guys disliked didn't stand a chance no matter how well they performed on the tests.

To this day, I don't actually know if that was true, then or now. I do know that at the time I believed my TD, and went looking for other dreams, because a closed union shop with arbitrary admissions rules meant I couldn't follow the dream I had.

Logical? No. But those two events left me with a lifelong distrust of unions that I have to do conscious work to overcome.

I wonder how many of us liberals and conservatives, religious and atheist/agnostic, nationalist and internationalists, how many of us had those beliefs informed by early experience and the reinforced by a lifetime of selective learning and listening?

Sometimes, when I think about this carefully, it gives me real pause. After all, how do you talk to someone in a lateral way about something they believe down in their bones?