Where I write: Science fiction author Jay Lake fights cancer one blog post at a time — The Oregonian with a piece on me, writing and cancer. Also a bonus video clip.

Best and Worst Writing Advice I've Ever Been Given — speaks.

The Problems Alcohol Can Help You Solve — What could possibly go wrong with a lede like that?

I Opt In! And Other TSA News of the Day

Study Says The More Walmarts In The Area, The More Hate Groups There Are — Heh. Interesting. (Thanks to .)

Liberals and conservatives think differently — Some commentary on recent studies.

?otd: Filed with the IRS yet? 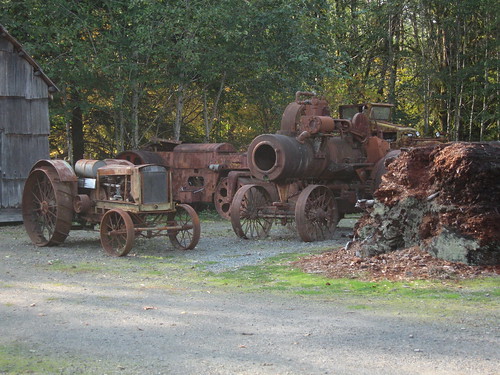 Sometimes I am just a contrarian. For example, it took me years to see E.T. [ imdb ], simply because of all the hype surrounding the film. (Apparently I was a proto-hipster back in 1982.) Likewise, The Karate Kid [ imdb ], because it was billed as "the feel-good movie of the year", and I refuse to go see any movie with that billing. I'm not sure I wasn't right about The Karate Kid, either, though I did enjoy myself when I finally did see the movie.

Alien [ imdb ] was probably my biggest error. I was so afraid of being afraid of the movie that it took me years to see that one as well. It's a hell of a science fiction movie, one of the best in the history of cinema, and I can't believe I deprived myself of that experience either in the original theatrical release, and for years after.

What I wish I could understand today, prior to the advantage of hindsight, is which movies I blew off or ignored, that I would regret having done so upon seeing them. Honestly, my life would have been just fine if I'd never gotten around to seeing The Karate Kid, but if I'd never seen Alien, I would be much the poorer for it.

Do you share this tic of mine, or some equivalent of your own?

What movies (or books) did you ignore and avoid, only to realize your error later?

What overlooked movies (or books) would you urge me to pay attention to?

Do I like filing taxes? Heck, no. The process drives me nuts. This is true mostly because of the Schedule C I have to file for writing income, and specifically the business expenses. I don't make enough money to pay someone else to deal with that stuff for me, so I have to track all the damned receipts myself. It's tedious and annoying, but it's how I can best optimize my tax picture.

Conservatives like to pretend that government is the problem, but honestly, not a heck of lot of would get done without the enabling processes of government. Everything from stable contract law to decent public roads for the delivery of wholesale and retail goods stems from the government. Conservatives also like to pretend that they did it all themselves, and if they can get ahead in life without handouts, no one else should receive handouts either. Which is absolute bullshit. Programs ranging from government-funded education to the home mortgage interest deduction are handouts that conservatives benefit eagerly from. And let's not even talk about farm supports.

So taxes? Heck, yeah. They support the life I enjoy today, and they help pave the way for others to enjoy the same, or even better, life in the future.