Review of Die Räder der Welt — At Phantasick-News, a German site. (Thanks to Marcel Bülles, my German translator.)

Mark Bourne Clarion West Scholarship Fund — A memorial for our dear friend. Check it out, and contribute if you can.

A View Inside the Sausage Grinder — Scrivener's Error with more detailed legal neepery on the new ebook pricing lawsuit.

Greenland ice sheet may be sliding away due to surface lake melt — Just a hypothesis so far (tip for denialists: what you like to confuse with "theory"), but more evidence of the inherent bias of reality in favor of a reality-based worldview. Weird, huh?

Roger Ailes: Soledad O'Brien Was 'Named After A Prison' — Ah, how I love the measured, thoughtful and rational tone of conservative discourse.

“Pro-Life” Community Very Upset More Women Will Not Be Collateral Damage in Their Religious Jihad Against Abortion — If they are so convinced they are right on the issue, why must they LIE about EVERYTHING? I would ask that of conservatives in general, and religious conservatives in particular.

If Romney Loses, the Republican Desire to Win the Presidency Will Trump All Other Considerations in 2016 — If Romney wins, it will be America turning a blind eye to the utter disaster that was the last period of Republican rule.

Mitt Romney thinks his wife lacks "dignity"? — Mitt Romney said this past January that he thinks stay at home moms taking care of small children are lacking in dignity since they're not working real jobs. But Hilary Rosen!

Romney’s Live Mic Moment — But what stands out to me most is [Romney's] explicit statement of what seems to be his campaign strategy — remaining as vague as possible about what policies he’ll actually pursue. “I’m going to take a lot of departments in Washington, and agencies, and combine them. Some eliminate, but I’m probably not going to lay out just exactly which ones are going to go.” That's because to get specific will alienate lot of voters. Nobody, not even Republicans, likes conservative policies when applied to them personally. Punishing the "other" is terrific GOP politics, but the reality is that even "real Americans" will get scorched of any of this ever turns out to be true.

Romney's remarks on limiting tax deductions draw fire — Once again, conservative "ideas" aren't popular when applied to conservatives personally. Removing the home mortgage interest deduction doesn't punish liberal sluts or little brown people or the greedy poor, it punishes "real Americans", and that will never fly with the GOP base. Republican voters like to imagine the cruelties behind which they rally will never apply to them. (See "the only moral abortion is my own" phenomenon for another glaring example of this deep hypocrisy inherent in the Right's worldview.)

?otd: Got rhythm? Got music? 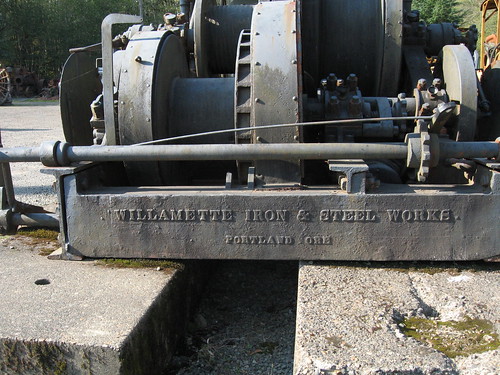 As the introduction (written by me) to A Cats Steampunk Alphabet Book says:

About four years ago, I mentioned on my blog that a steampunk abecedary would be a very cool thing. It started out literally as a joke, a bloggy game of the kind I like to play with my readers from time to time. Except in the real world jokes have a way of taking on a life of their own, mutating and metastasizing into things the originally wiseacre might never recognize.

This thing is goofy, cute and in a weird way, pretty cool. The Buzzfeed post on it shows off the graphics and layout. Me, I'm just highly amused that a project like this could actually come to market, and pleased to see it succeeding.

Yesterday I happened to be in the car as OPB broadcast the Canadian variety magazine show Q. The segment I heard included a reprise of an interview with jazz saxophonist Sonny Rollins. In the interview, Rollins talked about playing without thinking, about how when he was really playing his best he was sometimes surprised at what came out, and he didn't consciously consider it. He and the interviewer talked about how you needed to practice and acquire the basic skills to do something before you could begin immersing yourself in the activity unthinkingly.

That struck me as pretty interesting.

I remember when I first learned to drive an automobile. It seemed impossible to keep track of all the elements at once. I had to think about the accelerator, the brake, the clutch; remember to check my mirrors; flick the turn signal on and off; keep track of the gas and watch for the idiot lights; plan my turns; think hard about parking in any form, whether head-in, head-out or parallel; and a host of other, less urgent issues like where I was going, what the posted traffic control signage said, and so forth. All this long before doing the important stuff like tuning into good music on the radio or cruising through the fast food drive through. It was overwhelming.

These days, after having been on the roads for over thirty years, i get into an automobile and go somewhere without thinking about it at all. Driving has become practically an autonomous process. Conscious thought intrudes if I'm driving to an unfamiliar destination, or in a different state where some of the traffic laws might be different (like right turn on red), or am otherwise introducing a novel element. But even then, once I've dealt with the new situational element once or twice, it becomes part of my autonomous process as well.

I can remember in 1990 or 1991 when I first got serious about writing, with the Slug Tribe back in Texas. I had an enormous problem for a while with control of tense. Stories would start out in simple past, wander into present tense and back into past without rhyme or reason. I can remember being very frustrated about how I could possibly keep track of the difference.

Sort of like being frustrated about having two feet and three pedals when driving a car.

These days, I still sometimes write stories that shift tense, but always for a reason. And that reason is (almost) never a conscious decision. It just feels right when I do it. I can't even analyze it when I'm doing it — if I tried, I'd screw up. The practice of writing has become increasingly autonomous for me. Unconscious. Unthinking.

And very rightly so.

This means that when I want to add something new to my bag of tricks, or sharpen an existing skill, I can focus on that without worrying about juggling the rest of the balls. Just like driving to a new destination. I may be concerned about where to turn, but I long ago learned how to turn.

This also means that most of the time when I'm writing, I doing it the way Sonny Rollins described. I've mastered enough of the skills that I can focus on the practice without conscious attention. I think athletes call this "being in the zone". I've also heard this referred to as "unconscious competence."

It's pretty cool to think about. How far are you along the process of unconscious competence in your writing?