The Screech Owl Cam is Live Again (at Last!)

'Extreme Universe' puzzle deepens — The mystery surrounding the source of the highest-energy particles known in the Universe has grown deeper.

Racism vs. the Race Card — Ta-Nehisi Coates is thoughtful on conservative views of racism.

Britain destroyed records of colonial crimes — Review finds thousands of papers detailing shameful acts were culled, while others were kept secret illegally. As usually, destruction of the evidence is a lesser crime than what is being concealed. Anybody remember the Iran-Contra raid where the FBI politely waited for Oliver North and Fawn Hall to finish shredding documents?

The most amazing Supreme Court chart. Maybe ever. — This should go right next to a chart about the ideological fixations of the Court's conservative wing.

The Bush National-Guard Story Rises from the Dead — The story itself was never discredited or disproven, quite the opposite in point of fact, but the conservative smoke screen around it, enthusiastically abetted by Your Liberal Media, has ensured the truth will never be taken seriously.

Romney’s Foreign Policy Could Be More Ideological and Reckless Than Bush’s — As someone who, apparently unlike every single likely Republican voter in the United States, can actually remember the decade just past, may I say, "Holy crap!"

?otd: Are you sentimental, if you know what I mean? 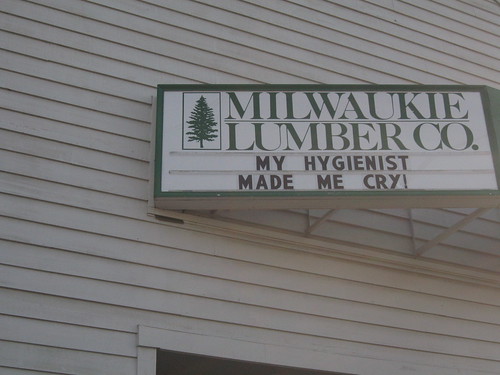 Good news yesterday, though, I didn't get the CT result until I was actually in with my surgical oncologist, which made for a tense and stressful morning. However, the actual radiology report was very encouraging. The relevant portion reads:

In plain English, that means the most recent liver resection shows no signs of a return of the cancer, and the lesion they found two months ago has reduced. That pretty much is conclusive that this isn't a cancerous tumor. Meanwhile, everything else is clean with no sign of additional metastasis.

In other words, hooray!

Our next step is a follow-up CT scan and bloodwork in mid-August. In the mean time, I will be having my chest port removed in the near future. Which is a stark statement on the part of me and my oncologists, as it will take years of good CT scans before I can be deemed cured. I'm not even in remission yet, technically.

Spent a lot of time yesterday thinking about the trap of hope. The past few years have really burned the optimism out of me. They've also pretty much cauterized the gaping wounds left behind. Hope is almost toxic to me now, because the price of the let-downs has been so profound. Far better to expect the worst and be pleasantly surprised when it doesn't come to pass than to live in hope and be shot down over and over.

On the other hand, I can now walk around for the next four months being a more-or-less free man. I know my pattern, I'll start to weird out about this a week or two before the next scan date. But without the presence of an existing lesion (as with going into this scan just past), it won't be so brutal or emotionally overwhelming.

So for now, my next trip to hell is on the shelf. Instead of measuring my life out in coffee spoons, I measure it out in CT scans. There's a child to raise and people to love and books to write.

This is a repost, which I will roll forward about once a month through the spring

In celebration of my natal anniversary, JayCon XII, my 12th annual 37th birthday party, is Saturday, June 9th, 2012 from 2 to 5 pm at the Flying Pie in SE Portland. We're partying because I was born, and because I have beat cancer again and again.

Note that I am announcing this early because people always tell me, "You should have told me sooner!" Except for the people who tell me, "It's too soon, remind me later." (Sometimes these are the same people.)