Endurance by Jay Lake — A review of my most recent Green novel from a feminist perspective. As it happens, this comes fairly close to my own view of the book.

Ancient language controls crime rings — Some gang members serving prison sentences are using an ancient language to try to keep control of their criminal organizations on the outside as corrections officers work fast to crack the code. (Via @lilithsaintcrow.)

Europe as seen by… — (Snurched from Andrew Wheeler.)

Can You Make Yourself Smarter? — Maybe.

It gets to me, sometimes — Anonymous Doc on the endless round of struggle and pain he sees in the hospital. This line caught at me: That there are lots of people out there living their lives and enjoying them, and not waiting for the next shoe to drop. People who aren't professional patients. People who aren't just biding their time until their diagnoses come to get them. I've been a professional patient these last four years, especially these past three, and even now am biding my time until my diagnosis comes to get me. I've seen this bitterly from the other side.

Global Warming & Climate Change Myths — Denialism, whether of global warming or evolution or just reality in general, is like criminal defense. The denialist pecks away at the evidence in individual chunks, never responsible for providing a coherent framework to explain the aggregate hypothesis. Each point the denialist attempts to make is under no obligation to interact sensibly with any other point. So large, well supported bodies of evidence can be safely ignored by otherwise intelligent people blinded by ideology or faith, who are being manipulated by cynical opportunists. Sort of like the OJ trial. (Snurched from Slacktivist.)

Vast Mexico Bribery Case Hushed Up by Wal-Mart After Top-Level Struggle — …a prolonged struggle at the highest levels of Wal-Mart, a struggle that pitted the company’s much publicized commitment to the highest moral and ethical standards against its relentless pursuit of growth. See, this is precisely why we need less government regulation of business, so companies will be free to cover up their misdeeds and protect their profits. Conservative paradise! Industry self-regulation for the win!

Can young evangelicals move beyond the Religious Right? — You know, it would be very easy for me to be snarky and cynical about the message of this piece, but I really want to take it seriously. Maybe this is a step in the right direction. (Snurched from Slacktivist.)

The Bourbon Democrats rise again? — “The Bourbon [Democratic-written] constitution of 1875 was a victory for prosperous . . . Alabamians who did not want to pay taxes to improve the lives of those less fortunate than themselves and who did not want to finance commercial development that did not benefit them directly.” What contemporary political party comes to mind?

Romney blames Obama for factory that closed under Bush — Considering that the entire Tea Party movement is founded on blaming Obama for things Bush did, why is this even news?

Sheriff Joe’s world crumbles — The controversial Arizona cop is prepping for a possible trial. But already, his closest allies have fallen. This amazes me. I always thought Arpaio was one of those conservative Untouchables, the real life version of what Republicans liked to pretend Bill Clinton secretly was. 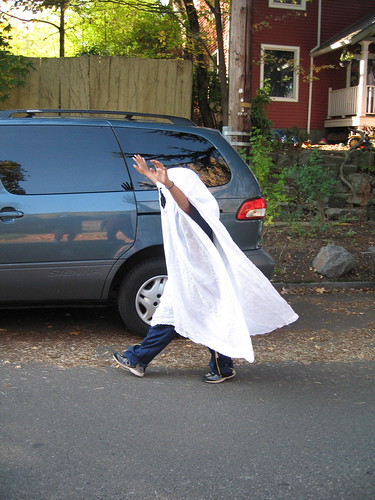 Yesterday was by design a pretty slow day. was heading off for snowboarding at Mt. Hood, and I had planned only two things. One, to spend some time working on Their Currents Turn Awry; and two, to spend some time visiting , who continues in the throes of post-operative recovery. After an almost too-solid night's sleep, I made it so.

Plus as a bonus round, between writing time and Lizzy time, I threw in a quick trip to Powell's Books. I wanted to pick up a birthday gift for (a/k/a my mom), and had asked me to score some Brent Weeks books for her. I signed stock while I was there, picked up a copy of the first volume of the A Game of Thrones graphic novelization [ Powells | BN ], and some brag copies of the April issue of Portland Monthly, wherein I penned a review of Mary Robinette Kowal's new novel, Glamour in Glass [ Powells | BN ] (first line thereof optional).

I left Lizzy's place late yesterday afternoon feeling pretty tired. I just wanted to go home and go to bed early. (This happens sometimes after I've overslept significantly the night before.) I'd done everything I'd planned that day, was away with friends, and, hey, it as Saturday. But I kept thinking about the Lyrid meteor shower due last night. And how clear and beautiful the sky was as I'd cruised around all day in the Genre Car with the top down. And how I wasn't a sick man right now, and didn't have to protect my sleep quite so ferociously. And how there would be meteor showers that night.

So I ate, shopped for groceries, then went home and brooded in my easy chair for a while about how tired I was. I then rattled up to see if she was free. We headed out to the Portland Women's Forum State Scenic Viewpoint, overlooking the western end of the Columbia Gorge, to watch the skies for a while from the comfort of the Genre Car's fully reclined seats with the top still down.

We were there perhaps an hour. Clouds were moving in and out from the east, which was annoying, as that horizon had been clear at sunset. The sky stayed mostly clear, with stars down to fourth or fifth magnitude easily visible, and perhaps a bit beyond that at a squint, so there must have been some haze at altitude. Still, we saw a ton of satellites, including one Iridium flare. spotted a meteor trail that I happened to be looking in the wrong direction to see. A bit later, we both spotted a long, bright meteor that trailed across the sky in two pulses. For the win!

Finally, my case of the tireds overtook me. We were there too early for the Lyrids' peak, but we saw cool stuff. Well worth the extra couple of hours of awake time. And hey, who doesn't like mysterious lights seen in the sky, flashing?

Today is the birthday of , a/k/a my mom. We're having a family celebration a bit later this morning. I just wanted to wish her a happy birthday right here.

Thanks for a lot of wonderful years.