Angelesen: Die Räder der Welt (Jay Lake) — What appears to be a positive review of the German language edition of Mainspring.

A natural history — Roger Ebert with a moving essay on growing up, and lost friends.

Tornado near Tokyo kills 1, injures dozens — I'm always a bit surprised when I read about tornadoes outside the North American Great Plains.

Reminders of Secular Authority Reduce Believers’ Distrust of Atheists — Many of my Christian friends seem to have grown fond of the self-valorizing myth that they are being oppressed or persecuted in modern America, but it is still true that atheists poll at the bottom of trustworthiness. Amazing, the power we secular types have as a small and least-trusted percentage of the population.

The ‘Big Four’ markers of the evangelical tribe — Slacktivist Fred Clark with some fascinating social history of the Evangelical movement.

Family Battle Offers Look Inside Lavish TV Ministry — This is precisely what our country needs more of, not those godless, immoral liberals.

Biden on gay marriage: ‘Absolutely comfortable with men marrying men, women marrying women' — Good. As it should be, assuming you value an open, tolerant society. Which conservatives explicitly do not. Another of the many, many reasons I can never be a conservative.

Republicans! Get in my vagina! — Very sarcastic video, funny as hell decidedly not worksafe. (Via .)

The Right-Wing's 20 Biggest Sex Hypocrites — The ones who scream the loudest about how godly they are often turn out to be the exact opposite. Only twenty? But, but, but, Clinton had a blow job! (Via .)

How to End This Depression — Paul Krugman is, as usual, sensible.

Republicans on ‘Politicizing’ Terrorism, Then and Now — Well, it was fine when Bush did it, just not when Obama does it. Like so many other things. Just ask any Tea Partier about deficit spending, foreign wars or corporate bailouts. Those only became a problem for conservatives after an African-American progressive was elected to the Oval Office. The GOP: setting the standards for intellectual consistency in political discourse since, well, never.

Schwarzenegger: GOP, take down that small tent — You didn't mind that 'small tent' when it got you elected, Arnie. I despise so-called moderate Republicans almost more than I despise the whackaloon conservatives that dominate the GOP these days, simply because while in a lot of cases the whackaloons really can't seem to help being who they are, the Republican moderates are people who know better and went along with the nuts anyway for electoral advantage.

Historic campaign collision of race and religion likely to arouse both pride and prejudice — Barack Obama vs. Mitt Romney, an African-American and a white Mormon, representatives of two groups and that have endured oppression to carve out a place in the United States. How much progress has America made against bigotry? By November, we should have some idea. Hint: which man is running from a party that has built and sustains its political fortunes foursquare on bigotry and intolerance? 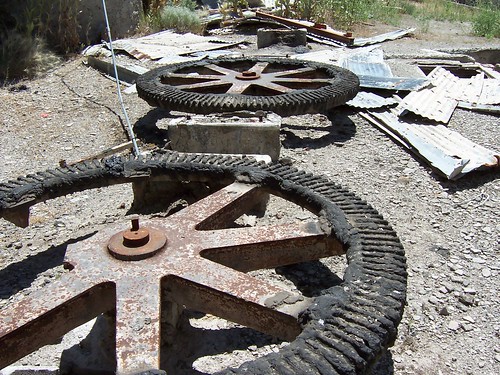 In the parking lot of the local burger joint

A Mini, two MGs, a Jaguar, another MG, and a Morris pickup all in a row — someone's a glutton for punishment, or has a thing for Lucas electrics

It is hard to see in this phone cam photo, but there's a plastic flamingo floating in the reeds by that log — I may go back later with the 300mm lens on the SLR and see if it's still there

Yesterday, 's lacrosse team played hard, but ultimately lost their game. We all rooted for them, but luck and skill were on the other side.

However, something happened during the game which I found hilarious. The field was pretty muddy with significant recent rain. A mated pair of mallards had landed near the centerline of the lacrosse field and were eating the worms that came up with the rainwater. The girls kept running back and forth right past the ducks, who weren't giving any ground. I thought this was hilarious. 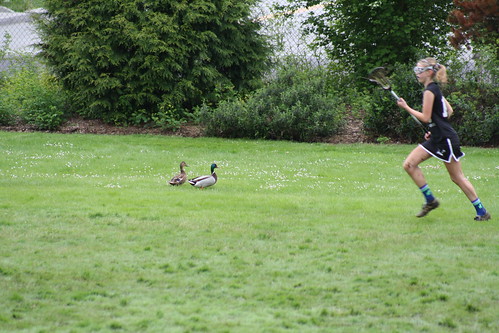 Eventually, they wandered down to the end zone and went worm hunting there.