The moon: look but don't touch, says Nasa — "He stuck a sign on every tree, saying this is private property…"

Glenn Beck in Exile — Don’t cry for the former Fox star—he’s building a 24/7 media empire in his loopy image. I'm pretty sure most conservative media and political figures are cynical opportunists who really do know better and really just don't care. Rush Limbaugh, for example. Beck, though, he strikes me as a true believer with a fervor and distorted internal reality bordering on mental illness. 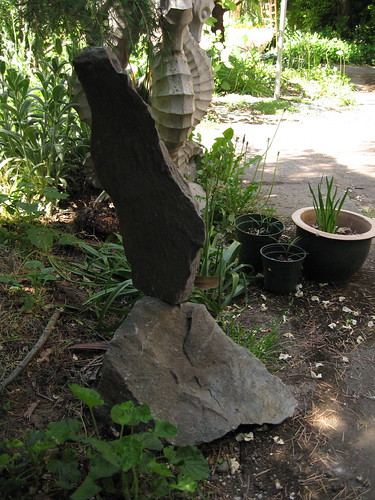 I cracked myself out of bed around 8 am yesterday, did my usual morning routine, before discovering that the reading I thought I had at 1 pm was actually at 10 am. Oops. Still, I made it there in good order, and had a pleasing turnout given that [a] it was the first hour of programming on day three of a Con and [b] this isn't a book-focused Con. I read "The Lollygang Save the World on Accident" and did Q&A for a while. It was fun and worthwhile.

Afterwards I diddled around with some folks, before hitting the League of S.T.E.A.M.'s parlor show. Twice. Basically, they were working in character, demo'ing some of their props and gadgets and whatnot. Hilarious fun, though my favorite hands down was the net cannon, a/k/a the H.U.G. gun.

After that I started to wander about, when Lady Ameliorette Potts texted me to come back if I wanted to get shot with the H.U.G. gun my own self. Hijinks ensued.

Then it was time to go off to the author panel, where I shared stage space with Gail Carriger, G.D. Falksen, Michael Lee and John White. That was a good hour of moderated Q&A with a pretty full house.

Evening devolved an impromptu birthday party in the Green Room for Captain Robert of Abney Park. After that, the evening unfolded. I caught part of League of S.T.E.A.M.'s review of their Web series, and about half the set of Steam Powered Giraffe. I finally decided their music was a fusion of high lonesome, three part harmony and stage comedy. Pretty wild stuff.

Further screwing around ensued, culminating in the League of S.T.E.A.M. conducting an impromptu stage raid on Abney Park during their encore of their concert set. Captain Roberts was H.U.G.ed, then spanked with the punchy fist for his birthday. I went along on this raid as the blogger embed, and it was one of the funniest things I have been part of in a very long time.

Afterward, more partying and dancing and whatnot until after 2 am.

Today is a slow, short day. I'm off to the airport at 3 pm to fly home, arriving about midnight. I do have some serious thoughts about my World Steam Expo experience, specifically about working a Con cold, and about being a very minor sideshow in someone else's world, but for now I'll just say this has been the most fun I've had in a very, very long time. My thanks to the World Steam Expo con com and volunteers, to old friends like @howardtayler and Evelyn Kreite, and to new friends very much including League of S.T.E.A.M..

What a weekend. Now I need a vacation to get over my vacation.