What Will Be — Kim Stanley Robinson’s 2312, a sci-fi novel so brilliant, it reads like an account of the past.

Darwin's Ghosts, By Rebecca Stott — Before 'Origin of Species', many European and Arabic thinkers had outlined the principles of natural selection.

Cook's View of the Transit of Venus — This is cool. 18th century science, on the hoof.

What You Hate Most About Waiting in Line

2 troubling examples of Google's conflicts — Google showed their hand with the banal evil that is the Google Books settlement, which in its current proposed form overturns three centuries of copyright law and abrogates core intellectual property rights of all authors everywhere in favor of one corporation's interests. Their famous motto is long dead, why would anyone be surprised now?

“We are a sideshow no longer” — At his first same-sex marriage since Obama's big announcement, a longtime advocate reflects on a decades-long fight. (Via Slacktivist Fred Clark.)

Conservatives Attack Scientific Findings About Why They Hate Science (Helping to Confirm the Science) — Some would like to dismiss the inconvenient findings about the political right, but the science won’t let them.

How Obama Was Dangerously Naive About STUXNET and Cyberwarfare — A Times exposé suggests that the White House failed to consider how our own cyberweapons would be used against us. Juan Cole with more on this.

?otd: Do the clouds expect it when it rains? 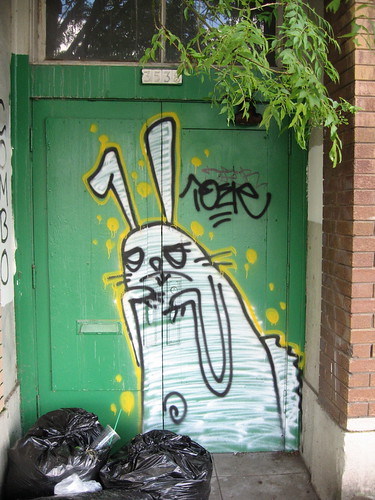 Yesterday and Team E— came over to help me get my basement at least somewhat more sorted. And by "help" I mean, "do all the work while Jay sits in a chair and dithers over high school class notes".

It's an unholy mess down there right now, in a lot of ways worse than when we started. Luckily, they are coming back over this morning to get the job pushed into something resembling a state of completion. This is way above and beyond the call of friendship.

Things that will (probably) be accomplished by the time they leave today:

Things that will (probably) not be accomplished by the time they leave today:

So, yeah, already a huge success. Even if it's hard to tell at the moment.

This has been a hard process for me. I'm not kidding when I say I have the hoarding gene. That's not precisely true, in that I don't accumulate 1,000 rolls of toilet paper or save stacks of decades-old newspapers just in case, but it really is very, very hard for me to throw most things out that aren't obviously garbage. Ie, food wrappers are fair game (unless they're unusual cheese labels), but old art by is not. Do I really need notes for a D&D campaign from 1980?

On the plus side, some cool stuff turned up. The first ever short story I can recall writing, back in high school. Some really dreadful teen angst poetry. That sort of thing. Some of which I will be inflicting upon you via this blog in the near future.

So, yeah, kind of a psychological binge-and-purge yesterday every bit as much as a living space binge-and-purge. There's probably a deeper and more meaningful essay on this process than can be encompassed by a casual Sunday morning blog post. Maybe I'll get to it soon.

After we were done, I was looking forward to going to see last night. However, I was not up to the drive back and forth across town. Instead I had a quiet dinner with my crew, played some Bang!, and called it a night.

Today, more bending and lifting, and more tired. But damn it will be nice to see that stuff a bit better straightened out.

This morning departs with the rest of her class for their eighth grade trip. They're going to California for five days, to climb redwoods and ride horses and hike up mountains. She'll be back in time for JayCon, but most of this week will be quieter than usual around Nuevo Rancho Lake.

This is a bigger deal than might seem obvious. She's a Waldorf kid. In that system, the teacher stays with the class from first through eighth grade. So this is a good-bye trip for Mr. C— and the eighteen kids in his class. They've been like family to one another since 2004. More than half her life. Some of the kids she's going with she started mixed age kindergarten with at age three and a half. Eleven years she's been with them.

It's all about transitions this month in the Lake household. Me, purging my basement. leaving behind her grade school. My birthday coming up, celebrated in health and happiness for the first time in four years.

And my daughter grows up another step. Maybe, so do I.