Is it a bird? Is it a plane? No … it's a dead cat with propellers stuck on it! — Because, um… Yeah. I got nothing here. (Snurched from @lilithsaintcrow.)

Dispatches from the birth of the Universe: sometimes science gets lucky

Astro-Porn of the Day: Venus Transit, Solar Eclipse, Cap'n Cook's Adventures — with a terrific round up.

Kids, wear your sunblock — Wow, this will make you think. (Via .)

Unlimited arm-swinging is not a credible religious doctrine — Further reason why I am an atheist. I just cannot bring myself to be as immoral and destructive as people of faith can be in the name of their religious beliefs. As an atheist, I have no possible justification for this kind of behavior.

Poll: Party-Line Divides Have Grown More Intense Over Last 25 Years — Gee. I wonder which party has aggressively pursued divisive partisanship, eliminationist rhetoric, and dedicated their legislative agenda first and foremost to removing the sitting president from power? After all, we know both sides are just as bad, right?

Why I Stopped Being a Right-Winger -- Modern Conservatism Has Become a Form of Mass Hysteria — A former conservative who worked for Reagan and wrote for National Review says the new hysterical right cares nothing for truth or dignity. I don't think this guy is a "former" conservative, in that he indulges in the same intellectual dishonesty common to virtually all conservative rhetoric (for example, his deliberate and casual misrepresentation of Sandra Fluke's testimony before Congress), but this is still a fascinating read of someone on the inside of the conservative movement complaining about their tactics. (Via .)

Obama and Romney shun confrontation on religion — Neither campaign sees an upside, and polls show it's a low priority with voters, especially compared with the economy. I'm pretty sure Jeremiah Wright's name will come out sooner or later from the very same Republicans who will cry "foul" if anyone mentions Romney's Mormonism.

This Republican Economy — So the Republican electoral strategy is, in effect, a gigantic con game: it depends on convincing voters that the bad economy is the result of big-spending policies that President Obama hasn’t followed (in large part because the G.O.P. wouldn’t let him), and that our woes can be cured by pursuing more of the same policies that have already failed. Also, does anyone in this country remember the Bush administration? We had Republican leadership, not that long ago. It was an unmitigated disaster. Hello, America? Anyone?

Meet The Romney Birthers — “I find it unacceptable that we cannot find a qualified American.” Chester Arthur's legitimacy also in question.

?otd: How was your Monday? 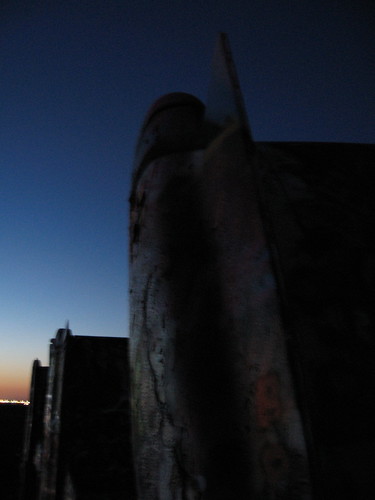 Well, Team E— and really came through above and beyond the call of duty this past weekend. All day Saturday and most of Sunday they cleaned, cleared, lifted, shifted and pushed me where I needed to be pushed. We took a full car load to the recycling drop point, a full load to Goodwill, and some stuff to Scrap. We set aside substantial goodies for JayCon door prizes. Also, magazines to Cameron's Books, and books to Powell's, as well as a whole stack of boxes to ship to archive.

There's still an enormous amount of work to be done in the basement, and some upstairs, but now it's down to a normal scale of effort, rather than the highly dysfunctional state the basement has been in. Plus my forthcoming JayCon house guests will be a lot more comfortable.

My profound thanks to Team E— and .

There's a meme in the Evangelical world that if you wait until you're married to have pizza, your pizza will be awesome.

I understand that in some people's belief systems, pizza can only be consumed within the sanctity of marriage. The right of every individual of consenting age to choose when and how they begin eating pizza is entirely up to them. That right clearly and unreservedly includes the choice of not eating pizza until they have entered a state of church-endorsed marital bliss.

For a lot of those folks, they're not even allowed to look at pictures of pizza, or smell pizza, or go into pizza parlors, or attend parties at homes where pizza might be served. To my personal view, this seems like it might be taking the whole no-pizza-before-marriage thing a bit too far, but everyone is entitled to their worldview. The First Amendment guarantees freedom of religion, and I for one would go to the barricades to vigorously defend the rights of my fellow Americans not to eat pizza out of wedlock.

But I really have to question the practical wisdom of this perspective, and especially the assumption of that married pizza will be even more awesome if you've never indulged in pre-marital pizza.

How would you know? With no pizza experience, you wouldn't have any idea if your marital pizza was awesome or not. You'd have no standards of comparison, and you would never have gotten an opportunity to develop your tastes.

We all know pizza preferences vary widely from individual to individual. Some folks are inveterate sausage hounds. Others prefer the classic simplicity of plain cheese pizza with all its warm, milky goodness. Some people like their crust thick and chewy. Others love it crisp and thin, going down fast and hard.

Beyond that, what about vegan pizza? Or gluten-free pizza? Or junky kitchen sink pizzas? Let alone the more esoteric forms of pizza, such as stuffed crust pizza, pesto pizza, pepperoni rolls, stromboli, and calzones. Even the sink of moral depravity that is meatball sandwiches can be argued to be a form of pizza.

And the ways and means of eating pizza... Many people do it missionary style most of the time, grasping the crust firmly and munching on the warm triangle before them. But some folks like to come in from the other end. That thick, ridge of fully risen and freshly baked dough can go down a treat before the explosion of salty goodness that follows. Some people use a fork. Some people even use a knife. Others stick to their hands, just as God intended.

Of course there are risks to eating pizza. You don't want to cut a slice out of some skanky old box that you don't know where it's been. Pizza shared with trusted friends and partners is probably a better idea than picking up any random pizza on a street corner down by the docks. But that's all human behavior. Smart, sensible pizza consumers can enjoy a wide variety without risking themselves overmuch. Prophylactics such as antacids can cut down on the health risks of pizza. Frankly, for most of us, life without pizza is a worse fate than navigating the risks of procuring and consuming pizza.

My point is, there are as many preferences in pizza as there are people who enjoy pizza. There are even people who don't enjoy pizza at all for purely personal or physical reasons. I fully support their right to live their life untrammeled by the emotional and social complications that pizza always seems to bring.

So, if you follow the Evangelical way, and you never look at pizza, or smell it, or taste it, or sneak a pepperoni roll on your way to the altar, how will you ever know if your married pizza is so very awesome as you're being promised? What will happen if you're a deep dish eater at heart who marries a back-to-front New York style vegan? You might never find out what kind of pizza pleases you most, what sort really makes your life worth living. You'll never know until it's way too late.

How will you know?

Because of the broad public interest in this topic — who among us does not think about pizza on daily basis? — I invite you to share your personal pizza testimony in comments. When was the first time you had pizza? What was the best pizza you ever had? Do you have an especially favorite pizza? Any recommendations on where someone just branching out and testing the pizza waters might find good advice and the appropriate support for their pizza-curious interest?