MIND MELD: Has Space Opera Lost Its Luster? — In which I and many others comment.

Call for Submissions: ‘Suffered from the Night: Queering Stoker’s Dracula.’ — An interesting project from Lethe Press.

Orbitz Isn’t Showing Apple Users the Best Available Travel Rates — That pretty much guarantees I will never, ever use Orbitz for anything ever again in my life. They can spin all they want after the fact, the point is they've proven they cannot be trusted. (Via David Goldman.)

Searching for John Snows — What 19th-century disease can teach us about today's Open Data movements. (Snurched from @stevenbjohnson via @lilithsaintcrow.)

Biology's Master Programmers — For more than a decade, synthetic biologists have promised to revolutionize the way we produce fuels, chemicals, and pharmaceuticals. It turns out, however, that programming new life forms is not so easy. Now some of these same scientists are turning back to nature for inspiration.

Signing Up for Google's Glasses Is Like Signing Up for a Mental Illness — Are you prepared to manage the distractions inherent in a portal to the Internet that you literally can't avoid? Because like all new technologies, Google glasses are a sign of moral decay that will rot your brain. Also, get off my lawn!

Russian Missile Forces Have ‘Safe Busting’ Sledgehammer — As tipster David Goldman says, this is somewhat missing the point of having a safe.

DVD Player for Christians — Personally, I find this creepy and weird and more than a little sad, but I'd much rather have people censoring movies in their own home than in mine, or at the cinema. (Thanks to .)

A tempest in my soul: A son's secret brings a Southern Baptist minister to his knees — It's a lot harder to cling to your conservative fear and bigotry when the Other is your own family. (Snurched from Slacktivist Fred Clark.)

US Department of American Redundancy Department — Language Log is funny about political rhetoric.

Ideology vs. Principle — Paging conservative America, who lost their principles long ago in service of their ideology.

And further off the deep end... — It really is worth emphasizing that this kind of thing did not happen on a regular basis when George W. Bush was president. The ideas were out there — fringe cranks on the left regularly trotted out bizarre theories about September 11 and shadowy Saudi influence, or whatever. But it stopped there, and it stopped there because responsible Democratic leaders refused to sanction it.

?otD: Might your eyes just as well be closed? 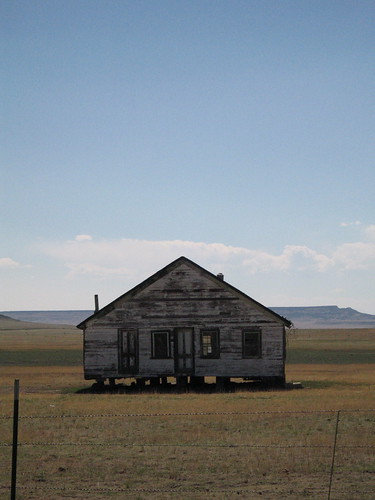 Yesterday I finished the first draft of a story called "Grindstone". 5,000 words of very melancholy steampunk. The requirement had been to write something about automatons or airships. So I did both.

When I sat down to start typing this past Monday, I opened the file and typed one sentence.

Blood always rusts the springs in my hand.

I had pulled this out of the air. It didn't mean anything yet. It had no context. There was no title. I was just typing.

So I typed another sentence.

Other people’s blood, to be specific.

At least now I knew whose blood it wasn't. And I had a wry tone to my character. So I'd begun to define the classic character in a setting with a problem, minus the setting thus far.

After that I typed a paragraph. Still pulling things out of the air, mind you.

It’s cold up here on the fly deck where I am cleaning my weapons. There is nothing around us but empty sky, stretching to the horizons and beyond. The good airship Entwhistle is two days and more from the nearest friendly port given our current heading and the nature of the winds in this airband. I can hear her engines straining slightly. They are running under just enough load to give them a workout without redlining. Which is good, because the rest of this vessel is about to fall through the sky, carrying us all with it.

(This is the straight first draft, by the way.)

At that point, I still didn't know what the story was about, not in the slightest, but I had a little direction. I'd set my pins because now I had character, setting and problem, along with some implied action. It occurred to me that the story's title was "Grindstone", though I didn't know why that was true, either. Then I typed about another page and finished the day at 300 words with a story stub.

Tuesday I sat down to write sgain. A second POV character presented herself immediately. She was watching Entwhistle dock, which gave me an opportunity to describe the airship from an external perspective. She had her own problems, every bit as severe as my first POV character's. It was decidedly non-obvious to me how these problem sets were linked, or how I was going to resolve either of them. By the end of that writing day, I had produced another 2,000 words.

Wednesday I once more sat down to write. I had 2,300 words, didn't know where I was going, and was aiming for 5,000 words. An hour and a half later, including various interruptions, I had 5,000 words with a fitting resolution that surprised me. I didn't know until the last couple of pages how it was going to all come out. I did find a very good way to use the grindstone concept in the middle, and it paid out at the end as well. The story needs some more attention, though so far my first readers have liked the piece.

Short stories almost always work this way for me. I start out with a nugget of an idea, sometimes as little as a single word or a simple concept. In this case, the nugget was "steampunk story about automatons and airships", plus those first two sentences, which I had utterly pulled out of thin air. I've jumped off the high board over an empty pool. I then begin filling the pool with water on the way down, so that when I land, the ending makes a proper splash. Or at least a proper enough splash that it can be fixed on revision.

It used to really bother me that I write this way. That's almost the ultimate in following the headlights. Short stories for me really are almost the same as free writing. Ruth Nestvold used to say I didn't write stories, I channeled them. And the way I do this matches almost no one's advice on how to write short stories. But it works. In my own opinion, I'm a better short story writer than I am a novelist; in novels, I more or less follow the generally accepted guidelines on how to write.

My point is, it doesn't matter how you get to the other end of the manuscript. There's tons of advice out there. Some of it is even from me. But it doesn't matter how you get there. It only matters that you get there. Hopefully in a way that is satisfying to you and produces a good narrative, but any finished story is by definition better than an unfinished story. (Exceptions include Ted Chiang and Howard Waldrop.) Because once you can and do finish a story, you can use that story as a tool to learn how to write a better story next time.

For me, it's filling the pool on the way down. Writing short stories is a leap of faith. Very nearly literally so. Even now, having written something like 500 first draft short stories over the past twelve years, I'm still surprised every time I land.

I'm leaving the "Open thread and call for questions" post open another day or so before I frame the responses. Drop by and ask me anything. [ jlake.com | LiveJournal ]
Collapse