The Conservative Menace? — Brad Torgersen responds to my post from yesterday about flinging poo, from a conservative perspective.

Butting Heada — Arinn Dembo responds to my post from yesterday about flinging poo, from a cultural perspective.

No evidence of aquatic humanoids has ever been found

Quantum Computation at Room-Temperature for a Reasonable Time

Physicists find new particle, but is it the Higgs? — LHC data confirm discovery, but not identity, of Higgs-like entity.

This is climate change

Global warming: It's "I-told you-so" time — Or not. Weather is not climate. Climate is, however, the aggregate of weather.

A Climate Scientist Battles Time and Mortality — I'm old enough (and at enough mortality risk, thanks to my friend cancer) that I probably won't live to see the worst losses from climate change. and her children will be living in a very, very different world. And if they're not too busy struggling to survive, they're going to be asking some very hard questions of my generation about why we stood by and did nothing in the face of the glaringly obvious.

The Best Case For the Bible NOT Condemning Homosexuality

Smaller government, smaller dreams, smaller people — An older post from Slacktivist Fred Clark on what society can do when people are committed to the common good.

Where the Money Lives — Vanity Fair investigates Mitt Romney's offshore accounts. Personally, I don't care that he's wealthy. Yes, there's an argument to made about representation democracy and social justice, but as far as contemporary American politics is concerned, that ship sailed a long time ago. I do care about the secretive approach Romney and his campaign have taken, because to me that telegraphs untrustworthiness. Admittedly, I'm not a likely Romney voter, but I would prefer to believe he has some integrity. Which is hard to do, given this kind of thing.

?otD: Ever exploded in a shower of sparks? 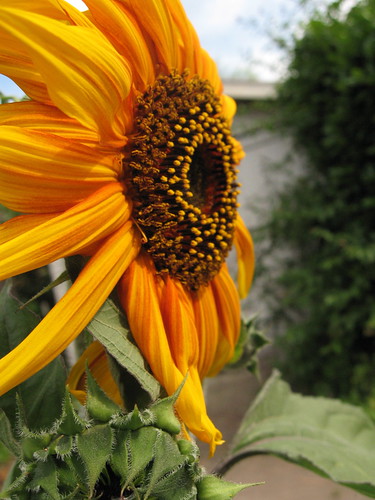 It will be a nice day today. We are having a cookout at the home of Team E—, including , (a/k/a my sister) and as well as some other folks. Team E— is smoking pork butt and standing ribs, I am making my heart attack potato salad this morning. Running a bit behind on the cooking as I slept a little longer than expected, then took advantage of the holiday morning schedule to take a two-hour walk, including the lovely bit of the hidden urban canyon along the western end of the Springwater Trail.

Spotted on my walk (after I'd left the trail and was headed back to Nuevo Rancho Lake): 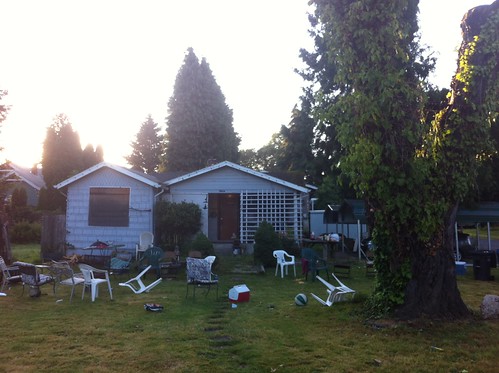 Somebody had a good Tuesday evening. About two dozen somebodies, I think. 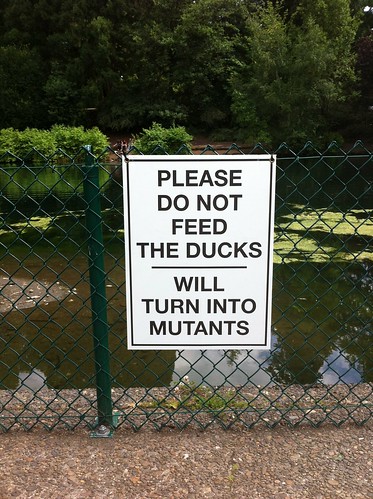 Tomorrow and Friday morning, workie bits. Then I'm off to Seattle Friday afternoon with to connect up with and his daughter. A nice, social weekend after that, then I'm off to Omaha next week.

Y'all play nice and have a safe and happy Fourth.

On this day 236 years ago, George III of England allegedly wrote in his diary, 'Nothing of importance happened today.'" This is almost certainly not true, but it sure makes a great quip.

As it happened, on that same day a group of middle-aged heteronormative white men who were for the most part the 1%ers of their era ratified a document called The Declaration of Independence. Thus was born an imperfect and glorious project in democracy, in private religion and public debate, in national idiocy and cultural wisdom. On the whole, I think they and we got a lot more things right than we got wrong.

The United States of America is my country. We have done great things, and we have done terrible things. We are not today at our best, but neither are we at our worst. While I am not jingoistic, I am a patriot. As a patriot I both love and criticize my country, its government and its people.

Whoever we are, wherever we are, as Americans we have both a right and duty to speak our minds. That right has often been abrogated for many people in many times and many places. Even today, we practice this principle erratically at best. People are silenced all the time, because of their gender, their sexual identity, their ethnic identity, their immigration status, their religion, their politics, any number of reasons. People are also enabled all the time, especially by newer technologies and the ever more flattened field of public discourse. As irregularly implemented as this right to free speech is, it is also nonetheless enshrined in our Constitution, and embedded in our national consciousness.

By coincidence, yesterday on my blog I exercised my First Amendment rights to go pretty far out on my political soapbox. [ jlake.com | LiveJournal ]

There's some interesting commentary in both sides of my blog. But even more interesting to me was the responses of people who disagreed with me. Specifically on Brad Torgersen's Facebook page, and his blog post entitled The Conservative Menace?. While there was a fair amount of the usual false equivalency and smokescreen rhetoric in response to me, there was also a minimum of name calling and quite a bit of constructive engagement.

I'm still framing a response to Brad's blog post. I think he's drawing false equivalencies there, and relying on personal anecdote to counter polling data presented by me, but I also think he's addressing the issues in good faith from his perspective, and (again) engaging constructively.

Likewise, Bryan Thomas Schmidt and I are working on a joint blog post based on some private chat dialog we had as a result of my original post.

I also wanted to paraphrase myself from Brad's comment thread, as I said a couple of things I think are important in this context. First, I brought up something that I failed to be clear about in yesterday's post. I wasn't criticizing conservatism as a political philosophy, nor particular individual conservatives. Although there is a great deal I disagree with in the conservative worldview, those are areas of legitimate disagreement. Concerning, for example, tax policy or the proper role of government in social assistance. What I was trying to say was that the litmus tests of contemporary conservatism have become dangerously defective. Foundational assumptions not of conservatism per se, but of the contemporary American conservative movement. To some readers, this may be a distinction without a difference, but it feels meaningful to me.

Secondly, I made a comment about what it feels like to be a member of the American left. (And note I choose my phrasing carefully. By European standards, I am at best a left-leaning centrist, and even that is being somewhat generous.) I want certain things for myself and all my fellow citizens, including:

I rather suspect that this list has a strong overlap with what most conservatives desire. Where we diverge is in what these individual items mean to us, how those goals might be achieved, and at least in terms of the current political dynamic, what the proper role of government in all its forms (regulation, taxation, etc.) is in achieving those goals. Some of that divergence is overwhelmingly vast, and some of it is deeply acrimonious. But fundamentally, almost all of us want to do the right thing.

That's important for me to keep sight of. Especially when I'm feeling very politically irritated.

236 years ago, this ball got rolling, at least in its American form. A few years after that, the Constitution formally enshrined a principle that I and a number of other Americans with whom I have a great deal of disagreement exercised yesterday. We spoke freely, and for the most part civilly.

Maybe that's the best July 4th present I could ask for.