Will you still medal in the morning? — The real games in the Olympic Village will not be televised. Athletes and sex? Well, duh. (Via David Goldman.)

Migrant Workers in China Face Competition from Robots — This is one of those 'from the future' headlines I'd have been just as happy not to see.

Dark, Starless Galaxies Observed For The First Time — This is so cool.

The woman who stood up to Joe Paterno

U.S. Declares the Largest Natural Disaster Area Ever Due to Drought — Rush Limbaugh to the weather room, stat!

Q&A: Barney Frank on the Contempt of the House GOP

?otD: What did you do this weekend? 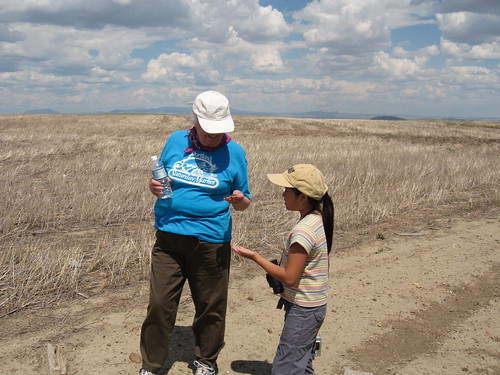 I don't comment on sports much on this blog, with the exception of occasional posts about 's team events and athletic accomplishments. I'm just not much about sports. My personal universe includes walking, hiking and (sometimes) biking. I am so not a sports fan that if the entire apparatus of professional sports in the United States vanished overnight, I wouldn't even notice until NPR ran an informative investigative piece on the subject a few weeks later.

Part of this is because of the way I grew up. I spent the vast majority of my childhood overseas in the era prior to VCRs or consumer satellite television, so there were no broadcast sports in the house. My parents aren't sports fans at either the college or pro level. Even the high school I went to was about as unfocused on sports as it's possible for an American high school to be.

My first real encounter with serious sports fans was when I went to college at the University of Texas at Austin. Hook 'em, Horns. Watching Longhorn fannery, and more specifically, Aggie fannery, rise nearly to the level of mental illness in some cases, pretty much confirmed my lack of interest in that culture.

On top of this, I experienced a childhood of always being the slowest kid in P.E. class, the most inept at ball sports, the last picked for every team or exercise (and often the subject of bitter arguments about who had to be stuck with me), all of this in the era when the gym teacher coaching style was to pick one kid to goat hard in order to motivate the rest. "You don't want to be like Lake, do you!?" shouted with a sneer were words I heard from adult authority figures for many years of my life.

Likewise, my first experience of the concept of privilege in the social justice sense of the term was through athletic privilege. As early as about fifth grade, the bad kids — bullies, petty thieves, etc. — who happened to be good at sports were excused a great deal of terrible behavior that would have landed most kids in a lot of trouble. By the time of my high school years, this favoritism was blatant and explicit. For example, you could be thrown out of my prep school for drinking, unless you happened to be a sports star whose contributions to the team drew alumni interest and donations.

All of which is to say, my attitude toward college and pro sports hovers somewhere between blank indifference and resentful contempt. Which I recognize is specific to my life experience and personal quirks, so I don't usually feel a need to comment on sports in public. Not for me to piss on other people's harmless passions. With the exceptions of dodgy stadium deals and some unfortunate educational funding priorities, sports fans don't really have a negative or destructive influence on public life. (Unlike, say, Evangelical Christians whose misplaced obsessions and passions frequently poison the well for everyone.)

Except sometimes sports does become destructive. Joe Paterno. Jerry Sandusky. Penn State. The Freeh Report. Even I, the resolute non sports fan, am aware of what's been going on in State College, PA.

And I just don't understand it.

How can devotion to a team, to a university, be so powerful that child rape can be excused and covered up and enabled to preserve that team's fortunes and good name? Not just one incident of child rape once, but a pattern of behavior known to the principals for well over a decade?

What the fuck is wrong with people?

This business is like everything I've ever despised about the culture of sports in America distilled into one evil package.

Why aren't Curley, Spanier and Schultz registered sex offenders rotting in prison? Why is there a single statue or plaque to Joe Paterno still left standing? Why does Penn State even still have a football program? This isn't the case of a child molester who happens to be tangentially associated with a football program. This is a case of an entire sporting dynasty resting explicitly on a knowing long-term coverup of child rape. To preserve Penn State's good name, and Joe Paterno's place in history.

Will anyone walk away from Penn State over this?

I seriously doubt it. The culture of entitlement and privilege around big time sports in America is too powerful. Penn State's need for alumni donations keyed to its football program is too great. What's a few kids getting messed around back in the day compared to the significance of a Big Ten football program?

My question to all you Penn State supporters with ready excuses for Paterno and the school, with easy words about how it's not the program's fault and you shouldn't punish the players or the institution by shutting things down, is this: How would you feel about the coverup if you were one of Jerry Sandusky's victims? How would you feel about Penn State if your child had been abused by Sandusky under the smiling protection of Joe Paterno?

There couldn't be a sports story with a more clear-cut moral than this. And I'm afraid it will have no effect at all.