Aurora and dumbass Americans — slices and dices conservative rhetoric about the Aurora shootings.

Why Do Scientologists Accept the Xenu Story? — Well, frankly, why do any faithful accept their foundational stories? Many if not most religious foundational stories are obvious and laughable cons when seen outside the lens of their own faith. (Thanks to .)

Ask Mormon Girl: How do you deal with the real history on Joseph Smith? — Speaking of believing in things which are patently absurd when observed from outside the framework of faith. As I've said many times, I utterly respect everyone's right to believe as they will. That doesn't mean I have to respect what people choose to believe.

The Conservative Onion — I really don’t think there’s been anything like this in American political history: a presidential campaign, with a pretty good chance of winning, that is based entirely on cynical lies about what the sitting president has said. No, Obama hasn’t apologized for America; no, he hasn’t denigrated achievement. Yet take away those claims, and there’s nothing left in Romney’s rhetoric.

Could Michele Bachmann cost Romney the Presidency? — Apparently, the GOP has finally noticed that former presidential hopeful Representative Michele Bachmann is a total loon. Which really doesn't make her stand out from their crowd much. 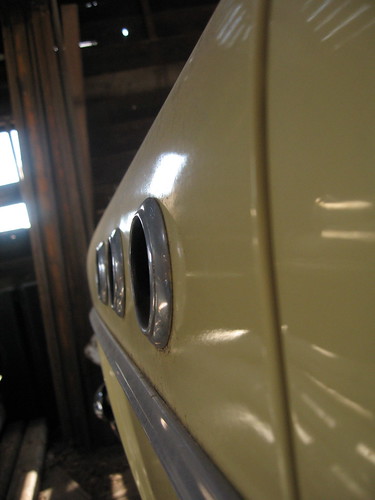 Yesterday, and I went hiking with half of Team E— and their dog N—. It was a comedy of errors getting there, as we hadn't agreed on a trail in advance as we usually do. So we hit the road toward the Gorge in the Genre car (me driving), while the other two consulted trail guides. We finally settled on the Siouxan Creek Trail in the Gifford Pinchot National Forest in Washington State. ("Siouxan" rhymes with "Tuscon", apparently.) Our plan was to do a 7.4 mile loop from the trailhead at the end of forest road NF-5701.

Unfortunately, the trail guide we were using had inaccurate directions to get us to Amboy, WA, the town nearest NF-5701. We didn't realize they were inaccurate, so we didn't think to double-check with Google Maps. So we wound up taking an extensive tour of rural Clark County, WA. Therein we were diverted, repeatedly, by sheriff's deputies protecting the route of a long distance foot race. We got seriously lost, took several wrong turns, and spent quite a bit of time driving on the wrong side of the road because of the runners.

When we finally approached our destination, the forest roads themselves were in dreadful condition, some of the worst paved roads I've been on in the United States. We had of course brought the Genre car instead of ' SUV, and I had to creep along at idle speed at a number of places. It wound up taking us over two hours to make the 70 miles or so from home to the trailhead. Which, if anyone is interested, can be found at 45 deg 56' 47.40" N latitude, 122 deg 10' 40.20" W longitude. On the plus side, we saw a coyote and several deer.

Once there we shoed up, watered down, and hit the trail.

There's an initial long, steep descent into the Siouxan Creek watershed. Experienced hikers will note that this means a final long, steep ascent at the end of the day. Not a desirable situation. Once on the trail itself, the slopes were gentle enough, and the views incredible. Including one of the best natural swimming holes I have ever seen. We also saw birds, bugs, flowers, berries, and all manner of natural splendor.

We didn't make our planned 7.4 mile out-and-back, as we turned back around 3 miles in due to fatigue. (We were at 45 deg 57' 41.40" N; 122 deg 8' 23.40" W at that point.) We estimate about 600 feet of elevation gain net, though a lot more hill work than that due to all the ups and downs. We were on the trail a bit less than four hours. On the way back I managed to leave my Birkenstocks in the parking lot at the trailhead, but by the time we figured that out, it would not have been worth the extensive trouble to go back for them 45 minutes each way over the terrible roads.

This is a truly lovely hike if you're in the Portland area and looking for something of the sort. I experienced it as an intermediate level of difficulty. If the weather were a bit warmer, I would have loved to try out some of the swimming holes. But don't forget your shoes.

I will be flying into Greensboro, NC for Day Jobbery, arriving late tomorrow afternoon, Tuesday, July 24th. I'm declaring an Open Dinner there that evening, 7 pm at Stamey's Barbecue, the Battleground location.

Please let me know if you think you'll be there. I've already got four confirmed and one maybe, so we're definitely having a party.