Why is Amazon becoming a hardware company?

Did the Bard speak American?

How do "today's students" write, really?

Pink Aurora Over Crater Lake — Wow. Another awesome APOD image. I've never seen the aurora, and I'd really like to.

In New Exhibit, Disney Lends Its Star Power to Reagan, and Vice Versa — Sigh. My second least favorite president, further sanctified. (Thanks to my Dad.)

Monsignor Lynn sentenced to jail for role in church sex abuse — In a soft and clear voice, disgraced Catholic Monsignor William Lynn stood Tuesday before a packed courtroom and apologized for the years of sexual abuse a young man suffered at the hands of defrocked priest Edward Avery, whom Lynn transferred to the boy's parish despite knowing that he had abused another boy. One tiny step in righting the monstrous behaviors of the Catholic hierarchy in systematically enabling and concealing child sexual abuse for generations.

President Obama's gun baloney — Yeah, he's a Socialist coming for your guns, alright. If ever there was a political moment for the Obama of the GOP/NRA's paranoid fantasies to make an anti-gun move, it would be now. Can you see the black helicopters coming?

"Voter ID, which is gonna allow Governor Romney to win the state of Pennsylvania, done." — PA state House Republican leader Mike Turzai on the year's legislative accomplishments. Conservative integrity always shines through. Even when they're bragging in so many words about vote blocking and election stealing.

?otD: WHat did you eat last night? 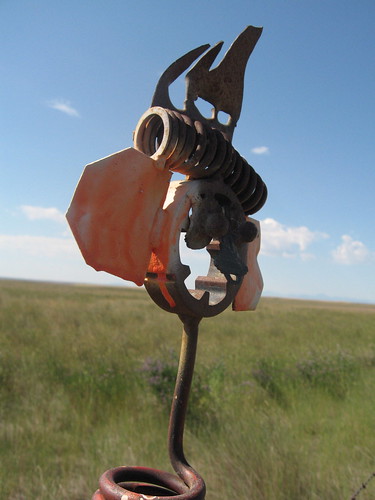 I am about ready to turn my sails back into the wind on political topics, after taking a break. I owe Bryan Thomas Schmidt a response on a joint post we want to do, and I have a few things to say to Brad Torgersen as well. Separately from those two discussions, I'm also preparing some commentary on people using religious doctrine to excuse themselves from emotional and moral responsibility for their racism and homophobia — the modern conservative's defense of "Hey, you can't call me a bigot! I'm a nice guy, I'm just following orders."

All that being said, I want to talk now about framing language, Communism and steak.

One of the things I find baffling about contemporary conservative political rhetoric is the degree to which political and media figures on the right use labeling in wildly inappropriate ways. That's framing language, of course, a largely successful attempt to influence the terms of public discourse in ways favorable to their cause.

People have always done this in politics, all the way back to the hunter-gatherer days, I am sure. The classic of modern politics is of course Newt Gingrich's infamous GOPAC memo from 1994. A cursory review of political history since the Clinton era makes it pretty clear that the GOPAC memo succeeded beyond even Gingrich's wildest dreams.

One outcome of that is that certain conservative scare words have taken on significance in American political rhetoric that barely aligns at all with their generally understood meanings. Eugene V. Debs would have been quite surprised to hear someone with Obama's governing style and policies described as a "Socialist", for example. There's not an actual Socialist on the planet who would recognize the current Democratic administration as a fellow traveler. Yet you almost literally cannot go a day without hearing Republican figures all the way up to the top referring to the president as a Socialist.

Which is objectively ridiculous, but does a terrific job of keeping the Republican voting base scared and angry. Everyone knows Socialism is bad, right? Never mind Medicare and Social Security and public schools and all the rest — the Right has decades of investment in that boogeyman, and they're not going to let it go to waste.

Likewise the label "Communist". When Florida Representative Allen West (GOP, of course) recently proclaimed in a very literally McCarthyite fashion that he had evidence that there were 80 Communists among the Democrats in Congress, he was speaking to the Republican base. There isn't a single Democratic politician in the United States that Fidel Castro or Vladimir Lenin would recognize as a Communist. West wasn't using that word with any relationship to its objective meaning. He was saying to conservatives that Democrats are despicable traitors who want to overthrow the United States government and take away people's money and guns. That's not the least bit true either in any rational or objective sense, but the modern conservative narrative demonstrably requires paranoia and victimization to sustain itself. West was merely throwing another turtle on the fire.

Which leads me to something I wondered about years ago: what is Communism, really?

I asked my dad (a now-retired U.S. diplomat, hailing from the Kennedy best-and-brightest era of liberal hawks) that question when I was about eight years old.

Dad very patiently explained some basics about Marxism, collectivism, and the workers' state in age appropriate vocabulary. He quoted, "From each according to his abilities, to each according to his needs."1 I processed this for a while, then asked the following question, now paraphrased somewhat through four decades of memory.

"So if everybody gets what they need, how do they decide who gets to eat a steak? If everyone just went to the store and took a steak, wouldn't they run out of meat pretty soon?"

Which, as Dad said, is precisely the problem with Communism. Who gets to eat the steak?

Which is how I've thought of Communism ever since: as a flawed system for deciding where the steak goes.

Really, that's what it's all about at some level. Who gets to eat the steak. That's what conservatives mean when they shriek that right-of-center Democrats are Socialists and Communists. They're afraid that the steak rations will change in ways they don't like. That's what the Occupy movement was about, what drives the mounting resentment against the 1% and the alarming growth of the class divide in American society. That fewer and fewer people are getting all the steak.

Who gets to eat the steak?

What did you have for dinner?

1. Amusingly, polling data on Karl Marx's phrase "From each according to his ability, to each according to his needs" shows that almost two-thirds of Americans believe that the phrase was or could have been written by authors of the Constitution, and can be found in the Constitution. Source: Columbia Law School. Mmm, Communism pace Thomas Jefferson.

The open dinner last night at Stamey's Barbecue in Greensboro, NC was quite nice. We wound up with nine folks including myself. Soon-to-be Asimov's TOCmate @grayrinehart (who'd driven over from Cary, NC), longtime Internet friend and her partner, IRL friends and cheese makers and and their one-year-old daughter E— (all of whom had driven down from Galax, VA), and my cousin Sheri Lake and her partner L— (who had driven up from some tiny town in SC). 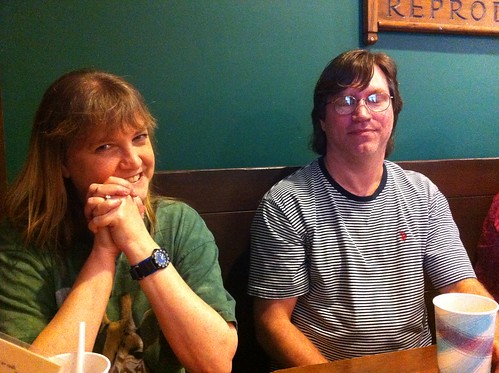 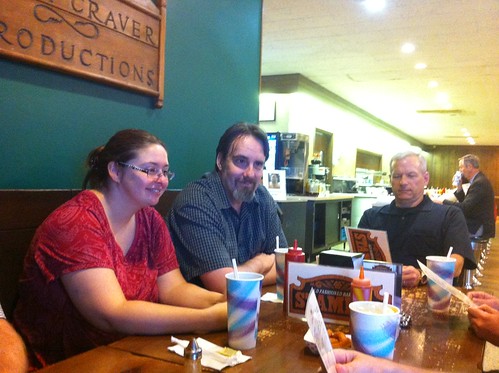 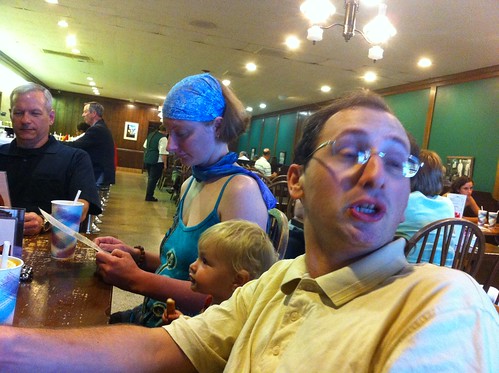 The food was interesting, though not as good as I'd hoped. I had hush puppies, Brunswick stew, a plate of pork and chicken with cole slaw, and some peach cobbler for dessert. Vinegar is an overly dominant theme in Carolina barbecue. The company was excellent and a lot of fun. I grew tired, and ended things maybe a little sooner than their natural conclusion, but I think everyone went away happy and well-fed. (Cheaply, too. The prices at Stamey's are quite reasonable.) Getting checked out was mildly hilarious, because we'd all started throwing money against a group ticket, and we confused the poor cashier.

One of the things that I find very fun is going various places around the country and seeing people like this. It was neat to see my cousin, who I haven't seen in about five years, but also folks I wouldn't normally see at all, like Gray or . And it was nice to introduce people to one another.

Plus and brought me some award-winning cheese from their Meadow Creek Dairy, and a cold pack so I have some hopes of getting it home in my luggage. Thanks, guys!