Between The Sheets #92 - London Calling — Urban fantasy author J.A. Pitts is interviewed by podcast. This one's not work- or child-safe.

Cancer Genomes Let Drugmakers Get Personal — One startup, H3 Biomedicines, uses genome data to design drugs aimed at small groups of patients. As I've said before, cancer isn't a disease so much as it is a process employed by hundreds, even thousands, of distinct diseases. Ideas like this get at the roots of the problem.

This Is What A 1987 Soviet Invasion Of Western Europe Could Have Looked Like — Mmm, ekranoplan. (Via .)

Ash and Lightning Above an Icelandic Volcano — Wow.

The Conversion of a Climate-Change Skeptic — The real world has a way of doing that, at least to people open to evidence that contradicts their ideology.

Dick Cheney: Picking Sarah Palin for VP Was ‘A Mistake’ — Transparently true as it was from moment one of the McCain-Palin campaign, that might have been a helpful comment from a major GOP figure, oh, about four years ago.

Mitt Romney is a frequent and blatant liar. Why don't our guardians of discourse care? — That Mitt Romney lies repeatedly and at length in his campaign discourse is a well-documented, objectively true statement, not a partisan one. Your Liberal Media supports and sustains those lies, because that's what Your Liberal Media does.

?otD: Got a warrant? Are you coming in? 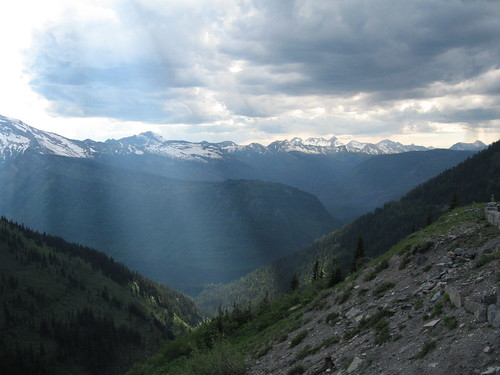 Another thing that came up in discussion over the weekend at Cascade Writers was dialog tags. If you're not familiar with the term, that's the "said Maryam" that comes at the end of a snippet of quoted dialog. So:

"This is a dialog tag," said Maryam.

Thanks to the Turkey City Lexicon and several generations of Milford-Clarion style workshopping, we've all had ourselves beaten half to death over "said-bookisms". Speaking verbs, basically. "Said" and "asked" are conditionally invisible. "Replied", "stated" and so forth are marginal. But words such as "interjected", "erupted" and of course that old favorite, "ejaculated", are intrusively strange except in instances of specific stylistic applicability. So:

"This is a said-bookism", intoned Maryam.

Getting around that problem, which is fundamental to the early writings of people educated in English at least (I can't comment on other languages) is part of the education of a writer. There are several basic techniques.

One is the judicious use of said-bookisms. There's nothing wrong with the occasional "interjected" or "queried" or something, so long as the word also carries some story weight, and does not draw undue attention to itself. (Note that you get to use the speaking verb "ejaculated" precisely once in your entire professional career, otherwise we will all come to your home and mock you.) So:

"Hello," said Maryam.
"Hi, there," replied João.
"How are you doing?" asked Maryam.
"I am fine," said João.
"May I press you to a candied starfish?" offered Maryam.
"No, I am fasting for cultural reasons," exclaimed João.

Still pretty stilted, but not quite so irksome as before.

We can also employ variant structure to break up the flow of the text and provide a little more rhythm to the dialog. Varying the structure can also shift the emphasis on individual lines. So:

Maryam said, "Hello."
"Hi, there," replied João.
"How are you doing?" asked Maryam.
"I am fine," João said.
Maryam offered, "May I press you to a candied starfish?".
"No, I am fasting for cultural reasons," João exclaimed.

Also pretty stilted, but again, not quite so irksome.

Now we can introduce blocking or action to indicate dialog, further easing the style crunch. So:

Maryam waved. "Hello."
"Hi, there," replied João.
"How are you doing?" asked Maryam.
"I am fine." João smiled.
Maryam held out a small crystal dish. "May I press you to a candied starfish?".
Hands flying up in apparent panic, João replied, "No, I am fasting for cultural reasons!"

Once we have a flow of dialog established, we can start omitting speaker referents and trust the reader to follow along. So:

Maryam waved. "Hello."
"Hi, there," replied João.
"How are you doing?"
"I am fine."
She held out a small crystal dish. "May I press you to a candied starfish?".
João's hands flew up in apparent panic. "No, I am fasting for cultural reasons!"

Even better is dialog where each character's voice is sufficiently distinctive that the tags aren't needed except to keep the reader occasionally reminded of who's got the ball in the serve-and-volley of the dialog. So:

Maryam waved. "Greetings."
"Yo, dawg," replied João.
"And how do you find yourself today?"
"Chillin', not illin'."
She proffered a small crystal dish. "Might I press you to a candied starfish?".
"Hell, no! I ain't eating that shit."

One of the suggestions I made to my student group at the conference was to write a scene between a crusty, retired professor of classics from some major university in New York City riding in a taxi with a youthful recent Somali immigrant cab driver. After some basic blocking and character setting, you really shouldn't have to tag that dialog at all. The differences in generations, cultural perspective and speech register should provide ample distinction.

I managed to be sufficiently busy this weekend not to worry much about cancer, life issues and mortality. But the next round of checks are two weeks from today, for bloodwork and CT scan, and two weeks from Wednesday for the oncology consult.

It's gnawing at the back of my mind. Either I'll lose close to a year of my life at untold emotional and social costs, or I'll be fine. The next bridge on my highway of life may be out, and I won't know until I reach it.

In the mean time, I continue to go 900 mph in every direction, ignoring the panic which seeks to consume me.