Reminder: I’m talking in Portland — Phil Plait, the Bad Astronomer, was here last night. I got to go hear him, and meet him afterward. He was awesome.

Stem Cells Could Fuel Cancer Growth — How can a cancer come back after it's apparently been eradicated? Three new studies are bolstering a long-debated idea: that tumors contain their own pool of stem cells that can multiply and keep fueling the cancer, seeding regrowth.

For Paternity Leave, Sweden Asks if Two Months Is Enough — Imagine the kind of Socialist hell it must be where fathers are expected to spend time with their newborn children, supporting their partners. I'm so glad American conservatives are here to stand foursquare against that kind of nonsense.

It’s the end of the world — chaos, the apocalypse, and well-woman visits — So it seems that HHS and the USCCB have rather different views as to what today signifies. Who should we heed? I’m thinking that maybe the all-male, authoritarian patriarchy commissioned to enforce religious obedience might not be the best source of information on women’s well-being and/or religious liberty. So let’s go with HHS.

A History of Black Violence — Ta-Nehisi Coates is thoughtful. And sobering.

Chick-fil-A appreciation day brings fans, critics to streets — I've seen some of my conservative friends crowing online about Chick-fil-A's brave victory for free speech and values, and their commendable stance against the demons of political correctness. Which is such terribly confused thinking that it's hard to know where to start trying to correct it. I'll say this: surely Chick-fil-A and Mr. Cathy are free to advocate for any form of bigotry and hatred they please. No one is seriously arguing otherwise. But it's no denial of that right to call them on their vile rhetoric.

Chick-fil-A Introduces New Hate Sauce — Delighted customers mobbed the restaurants to try the zesty new sauce, with many chicken fanciers ordering their sandwiches with extra hate. “It’s so spicy it makes your mouth feel like it’s on fire—like a gay couple in hell,” said Harland Dorrinson, who sampled the sauce at a Chick-fil-A in Orlando.

Sanity and Insanity in American Politics (Bachmann, Sessions, Romney, and Chicken) — My favorite from the list in this link: Sen. Sessions: ‘I Am Offended’ By Views Of Climate Scientists. Which is classic conservative thinking. When the facts don't match your ideology, attack the facts. Conservatism cannot fail you, but you can fail conservatism.

Steve King Ponders The 'Telegram From Kenya' Scenario, For The Birthers — I wonder what color the sky is in conservativeland. It must be very pretty.

Romney’s World — Mitt’s insults, mistakes, and blunders abroad aren’t gaffes. They actually represent his true worldview. Hey, after Dubya (and Quayle), the GOP bar has been set so low that you'd need a metal detector and a backhoe to find it.

Mitt Romney could face huge hurdle with women voters in swing states — Huh. Yah think? Could being the candidate of the political party with a wide array of offensively anti-female policies and platform planks cause a problem with women voters? No one could have predicted that! 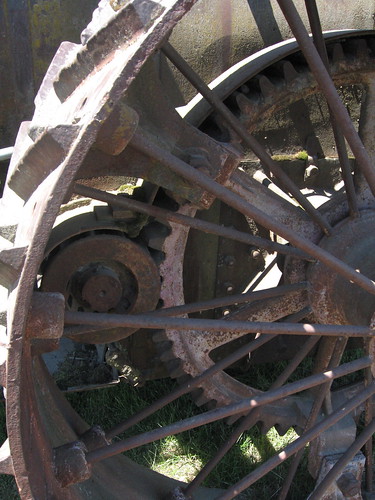 Last night I went to OMSI Science Pub at the Bagdad with (a/k/a my sister), and a bunch of other folks to hear Phil Plait, the Bad Astronomer, give his Death From the Skies talk.

The BA was every bit as erudite and entertaining as I had hoped. He's a very engaging speaker with a personal style that is in the same quadrant as my own. In part, I was taking mental notes on how to improve my speaking skills, as there were a number of things I could learn directly from him. The presentation itself covered a topic with which I am already reasonably familiar — asteroids, comets and Earth impacts — but colored in an enormous amount of detail for me. I learned a lot in that respect, as well.

Afterwards, I got to hang a little while with the Science Pub crew as they took him out for a drink.

I don't fanboi out much, but did enough to get that photo and chat Dr. Plait up a bit. A lot of fun, if a rather late night for me.

Yet another topic that came up in critique discussion this past weekend at Cascade Writers was the concept of a balloon prick idea.

This concept was first pointed out to me some years ago by the brilliant Dean Wesley Smith when he was critiquing one of my stories. Basically, it's when an author introduces a story element or plot twist which would in reality so profoundly undermine the world in which it exists that the story no longer makes sense.

Dean was critiquing a story of mine where homelessness was in effect a transmissible disease. If a homeless person touched you, you swiftly became homeless, and then socially invisible, and then literally invisible. This was going in a setting of contemporary Portland. As Dean quite rightly pointed out, if such a thing were true, nobody who could possibly afford otherwise would go out in public without body guards and a security perimeter. The separation between the wealthy and the middle class and below would become an uncrossable gulf. Life would look nothing like it does in our current society if this were true.

More prominent examples of the balloon prick idea include the Star Trek transporter. With such a device and its attendant features such as the biofilter, you have fantastic healing powers and functional immortality. Topics which are barely addressed anywhere in the multiple series, and when they are, only as plot conveniences. Likewise, since they can do point-to-point transportation when needed, why bother to ever have a transporter room? These issues are simply never explored. There's sufficient story action and plot sleight of hand that most viewers never notice.

For another example, see Naomi Novik's Temeraire series. Within the narrative, it is observed that the Romans had dragons. Presumably so did other ancient cultures of the world. That's a balloon prick idea. Aerial reconnaissance capability means that over-the-horizon deep water navigation is reasonable from the very beginning of long range seafaring, which profoundly changes the dynamic of ancient maritime cultures such as the Minoans, the Romans and the Phoenicians. The likelihood that the trade and colonization patterns of those cultures would have led to a close equivalent of Napoleonic Europe is deeply improbable. The Temeraire novels make sense only if you parse them as being about people who have acquired dragons in the very recent past, and not yet undergone the cultural changes that free flight and aerial combat impose. Which is, in effect, what's actually going on in the books of that series. The central story question is "How would dragons have affected Napoleonic Europe and rival world powers?", not "How would dragons have affected the development of human civilization?"

Take this concept of the balloon prick idea for what it's worth, but do take it into account when building your worlds and writing your stories.