Neil Armstrong: 1930 – 2012 — I can remember, just barely, watching the moon landing on a tiny black and white television.

Cyborg Tissue Monitors Cells — Researchers at Harvard University have constructed a material that merges nanoscale electronics with biological tissues—a literal mesh of transistors and cells. The future is amazing.

No word for self-aware — It must be because there’s no concept of cash in white culture. Did you know they have twenty different words for “coffee” but no word for “self-aware?” Hahaha.

Top Ten Pieces of Bad News for Romney on Eve of Convention — This piece certainly hits all of my confirmation biases, but it also raises some interesting points.

GOP ponders Bushes past and future — Since 2008, Republicans have taken extraordinary pains to distance themselves from the legacy of Bush 43, whom many Americans identify closely with a global financial meltdown and the war in Iraq. Notice the careful phrasing that frames Bush's objective personal responsibility for these two disasters as a matter of partisan opinion. Your Liberal Media, supporting the conservative narrative since forever.

Republican Convention Schedule Changed — Ann Romney's speech, originally scheduled for Monday, has been moved to Tuesday, so it will be covered. In some ways, she is the most important speaker at the convention and the only one who can poke fun at Mitt Romney and humanize him. She often mentions the time he was speaking somewhere and he said to her: "Sweetheart, in your wildest dreams, did you ever see me coming here and speaking to this group?' And she said: 'Mitt, you aren't in my wildest dreams." Heh. (Via David Goldman.) 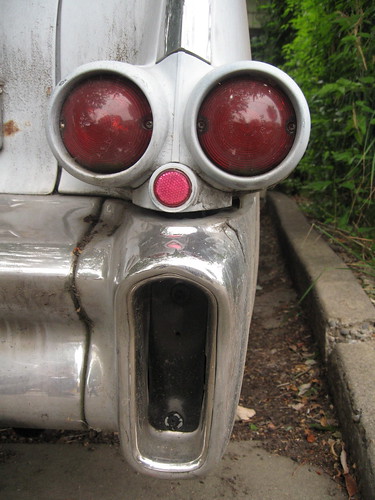 Yesterday, among other things, I went with Team E— to a free showing of Labyrinth (1986) [ imdb ] at McMenamin's Bagdad Theater and Pub. It was fun to watch, both because I can remember how much I liked the movie when it first came out, and I can now see how dreadful that movie is at many layers. As I said afterwards, it is very much a product of its times. I also realized somewhere in the middle of the movie that I'd gotten my recollection of the film mixed up with Legend (1985) [ imdb ].

I then hied myself over to Cathedral Park out in St. John's. Ellen Eades had organized a trip to see the last production of this year's version of Trek In the Park. I met her there along with good friends and . This year's episode was "Journey to Babel" [ imdb ]. It was fascinating to see Star Trek acted on a bare stage set with minimalist props. Everything came down to costuming, dialog and action. It was clever as hell, and quite funny.

I was also fascinated by the whole idea that a couple of thousand people could watch and understand something done on such a bare set with so few external cues. If you weren't familiar with the television series, this would have made very little sense at all. David made a comment about it being Shakespeare for our time. I don't know about that, but it was an amazing communal experience and most entertaining.

Next year they're doing "The Trouble With Tribbles" [ imdb ]. Based on the brief preview, I am thinking this will be something not to be missed.

The first time I can remember thinking I was going to die was back around 1982 or 1983. I was either a freshman or a sophomore in college, I don't recall which now. We'd all piled into Pete's parents' Grand Marquis so he could tow his NACRA 5.2 racing catamaran down to Lake Buchanan, behind Buchanan Dam near Burnet, TX. It was a day of sailing and stupidity in the fashion of students everywhere with a little time and a friend with a boat.

I wasn't a small man even then. Wearing the harness that allowed me to dangle from the mast stay and fly when the cat went up on one hull required me to take off my life jacket. So instead of a floatation device, I had about ten pounds of fabric and metal wrapped around my upper body as we skimmed across the deep water not far behind the dam, at least a good quarter mile from shore.

A swift blackline squall popped over the looming height of the dam. We had not seen it coming, not me, not Pete, not Steve-that-we-called-Wally, none of us on the boat. The wind knocked the cat flat over. I spun at the end of the line straight up in the air like a plumb bob being swung on a line, avoided decapitating myself on the forestay of the mast by dumb luck (though it did take a little chunk out of my toe), and dumped into the water where my glasses fell off.

In a reflex drilled into me by an entire childhood of wearing corrective lenses, I let go of the safety line to grab at them.

At the same time, the cat took off on its sail functioning as a hull, and the trampoline of the deck functioning as a sail, propelled by the sudden, violent energy of the storm. Steve dove in after me, trying to help, also not wearing a life jacket. Within seconds, he and I were alone in three-foot chop and violent rain, with lightning striking the water around us. We were too far from shore for me to swim comfortably even in good conditions (I literally don't float, even in a swimming pool, so any time spent in deep water is very laborious for me), let alone in heavy weather with the harness still on my body.

That was pretty much it. I shouted at Steve for putting himself in the drink with me. He shouted at me for letting go of the safety line. My arms tingled with the electricity hitting the water. It was an even bet whether we would both drown or be electrocuted first.

The only reason I survived that day was that two people out in a motorboat had seen us go over. They were quartering the lake in the teeth of the storm, looking for me and Steve. Within about three minutes, we were fished out by friendly hands. In another ten minutes, the storm had passed and we had caught up with Pete and the catamaran. It was all sun and fun and oh my God after that, with profuse thanks all around.